There was something that separated Fred C. Trump from the average greedy developer. It’s wasn’t the endless scandals that followed his every Coney Island project, and it wasn’t the misappropriation and theft of public funds that seemed to be his business model. Trump’s policy of discrimination in rentals and his political cronyism were just business as usual.

Two incidents stand out that as defining Trump’s personality. The first is well known and occurred when Trump was denied a zoning change to build his “Miami Beach- style” high-rises on the Steeplechase Park site. The frustrated developer threw a party and invited guests to vandalize the building by tossing objects through the stained glass façade of the Pavilion, knocking out the teeth of the enormous Steeplechase funny face, the smiling symbol that had brought joy to millions. This sad event was a vindictive and shameful act by a grown man behaving like a juvenile delinquent. It wasn’t business, — it was personal. The desecration of an icon and the breaking of glass as public spectacle revealed a twisted personality that was unusual for even the most hard-bitten developers. 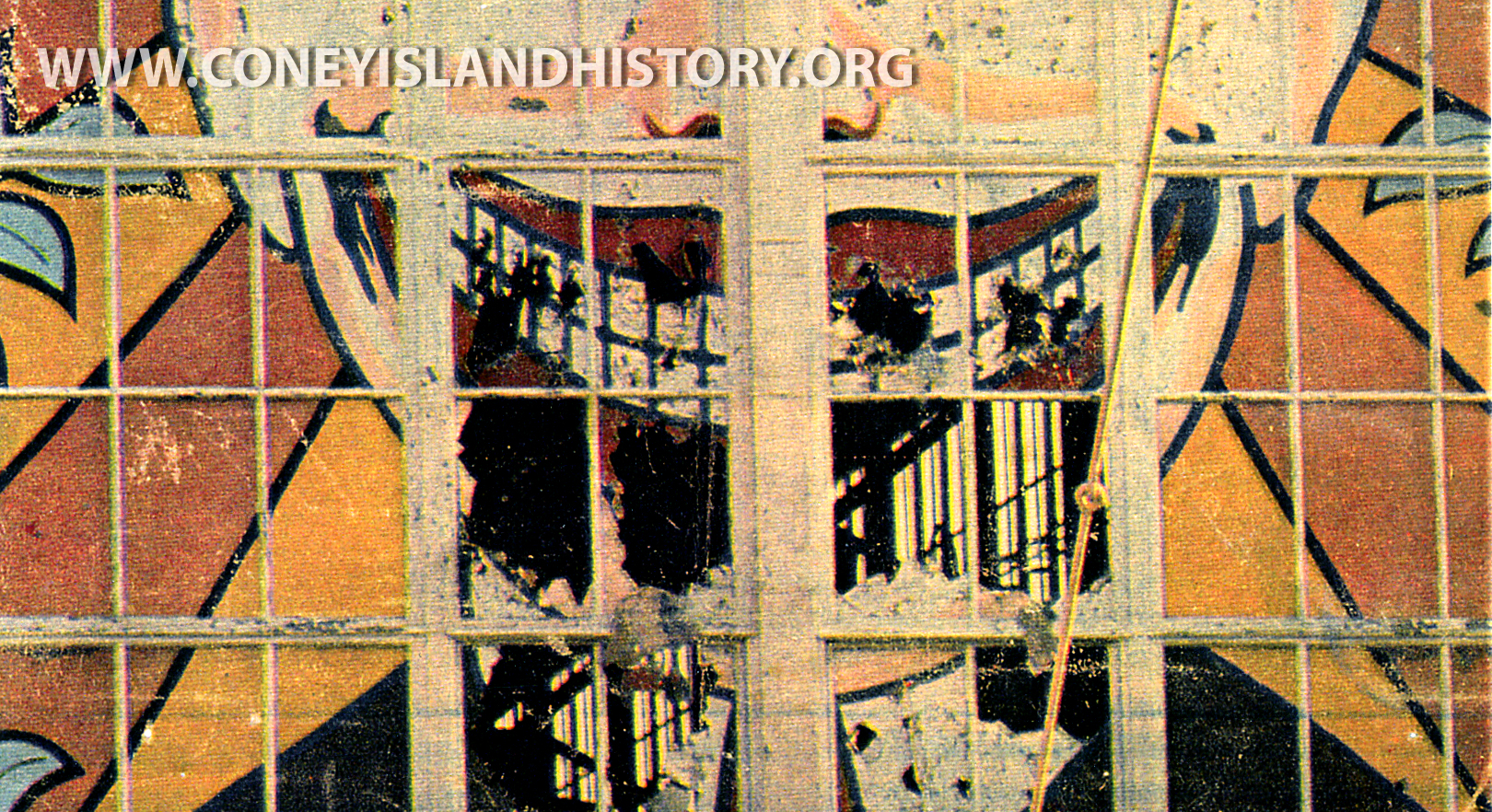 In 1992 he was at it again. The city was about to begin a complete restoration of the defunct Parachute Jump, which had fallen into disrepair. Trump stepped in, uninvited, and offered to demolish the landmark for free. The man had no financial interest in the tower and nothing to gain by having it torn down. It was just another publicity stunt by a mean-spirited man. Trump reveled in gleeful malice.

Few people realize the influence that Fred Trump had over the transformation of Coney Island’s West End from a middle-class neighborhood to a burning slum during the late 1960s. His demolition of the Steeplechase Pavilion is now legendary, but his other scandalous Coney Island projects have largely gone unnoticed until now. Our new exhibit, which we planned long before the Trump name came up in national politics, illustrates the long-term effect that he had on Coney Island. Those of us who lived in Coney Island during the 1950s to 1970s were adversely impacted by the collaboration of Fred Trump and Robert Moses, the duo who ran roughshod over poor neighborhoods with a “slum clearance” program that was a gift to rich developers and a nightmare for the poor.

Every single Coney Island project that Fred Trump was involved in, from the 1940s throughout the 1960s, was touched by scandal, misappropriation of public funds, and political cronyism. The Beach Haven, Shore Haven, and Trump Village projects all led to allegations of impropriety and discrimination. There were federal hearings and investigations into Trump’s business practices, allegations of defrauding veterans in rental agreements, and charges of racism. Trump’s display of greed and avarice was unusual for a major developer. Unlike Robert Moses, who was known as the master builder, Trump was more of a master manipulator. Federal laws had to be changed to prevent the kind of nefarious schemes that Trump excelled in.

In 1948 Trump formed an organization of builders that partnered with Moses to gain massive building sites that were to be taken by eminent domain. The Trump Village site was one of those, as was the old Luna Park site. Trump lost the Luna site after he was blacklisted by the federal government because of his Federal Housing Authority scandal, a scheme where he overestimated his building costs and pocketed millions of dollars in public funds meant for veterans housing.

Nine hundred poor families were cleared from the Trump Village site and moved to the old bungalow colonies in Coney’s West End. The housing was substandard, and many people, mostly children, died in the fires caused by inadequate space heaters in buildings that were never meant for year-round use. The racial balance of what had been a diverse community was upended, and slumlords gained control of what had been a working-class neighborhood. Trump and his friends profited handsomely from this relocation scheme.

There are too many instances of Trumps perfidy to list in this account, but his pilfering is documented in great detail in our exhibit based on newspaper accounts and oral history interviews with people who knew Trump, confronted Trump, or were affected by him. 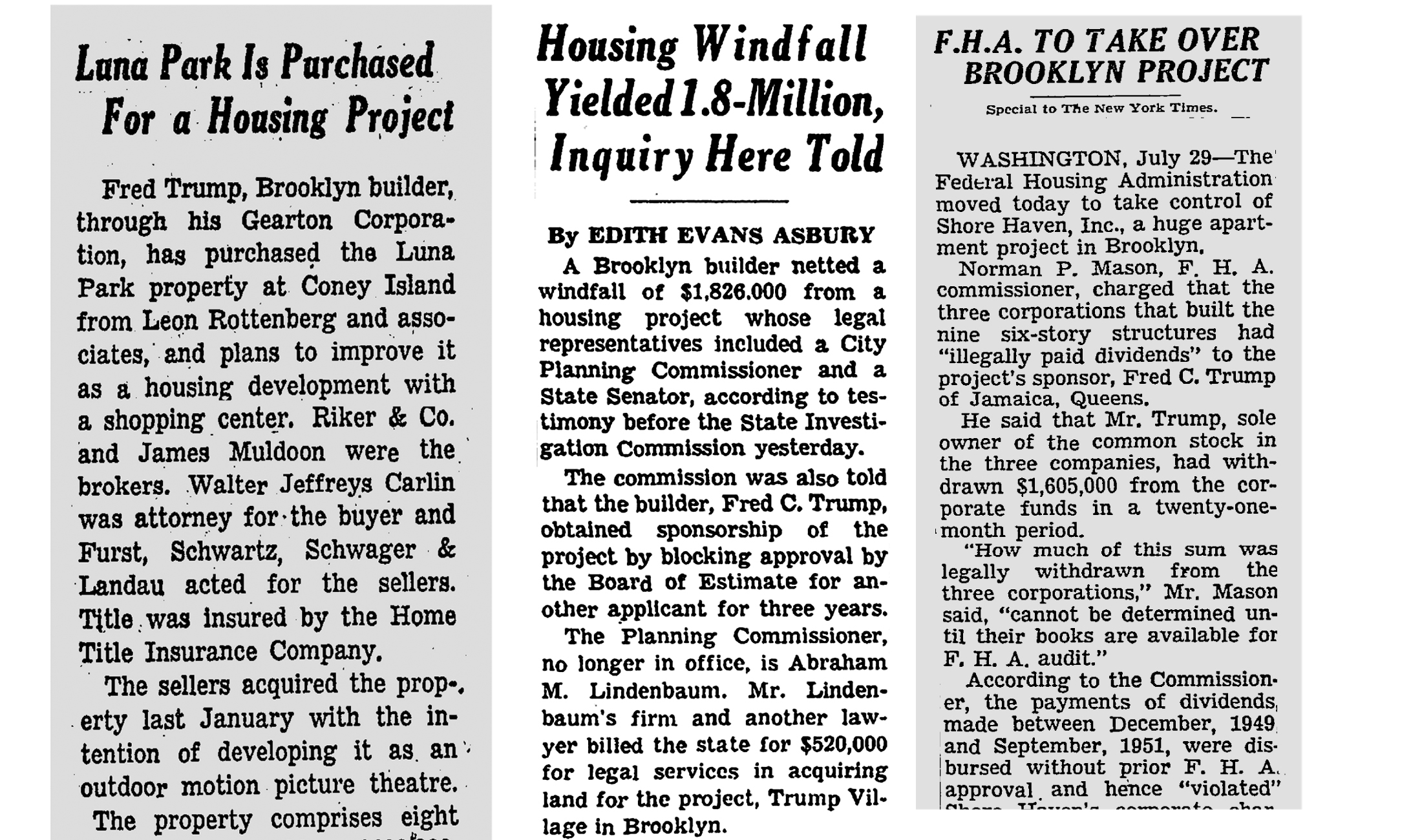 One of the strangest accounts in the exhibit is drawn from an oral history in my 2002 book, Coney Island: Lost and Found. It tells the story of how Trump met his match while dealing with an old-time Coney Islander who outsmarted him at every turn after he had leased the Steeplechase site. Trump knew what to do: he didn’t get mad at him; instead he tried to hire him.

In my many years of recording Coney Island oral histories, it’s surprising how many times Fred Trump’s name comes up, nearly always in a negative light. In 1999 I was recording an interview with Jerry Bianco, the former Brooklyn Navy Yard welder who built the Yellow Submarine on Coney Island Creek, when the Trump name popped up in an unexpected way. We were discussing the Parachute Jump, and Bianco stopped me and said, “ I had the contract on that.” I was surprised and asked him if he had been hired to restore it. “No,” he replied, “to tear it down.” He then revealed for the first time that in 1966 he had been approached by Fred Trump to demolish the venerated structure.

This revelation was a shock. I’d documented Bianco’s construction of the sub in 1969 and 1970 and knew that he had the skills to take down a big tower. I never realized how close we came to losing Coney’s greatest surviving landmark. This was one of the few times that Trump would not get his way, and I asked why the tower was still standing. Bianco told me that his bid of $10,000 was too high, and Trump had backed out of the deal. Bianco then described in detail how he would have done the job. Today, no thanks to Trump, the Parachute Jump is still standing. It’s been 50 years since Trump’s demolition of the Steeplechase Pavilion, and it’s taken the Coney Island community a half century to recover. 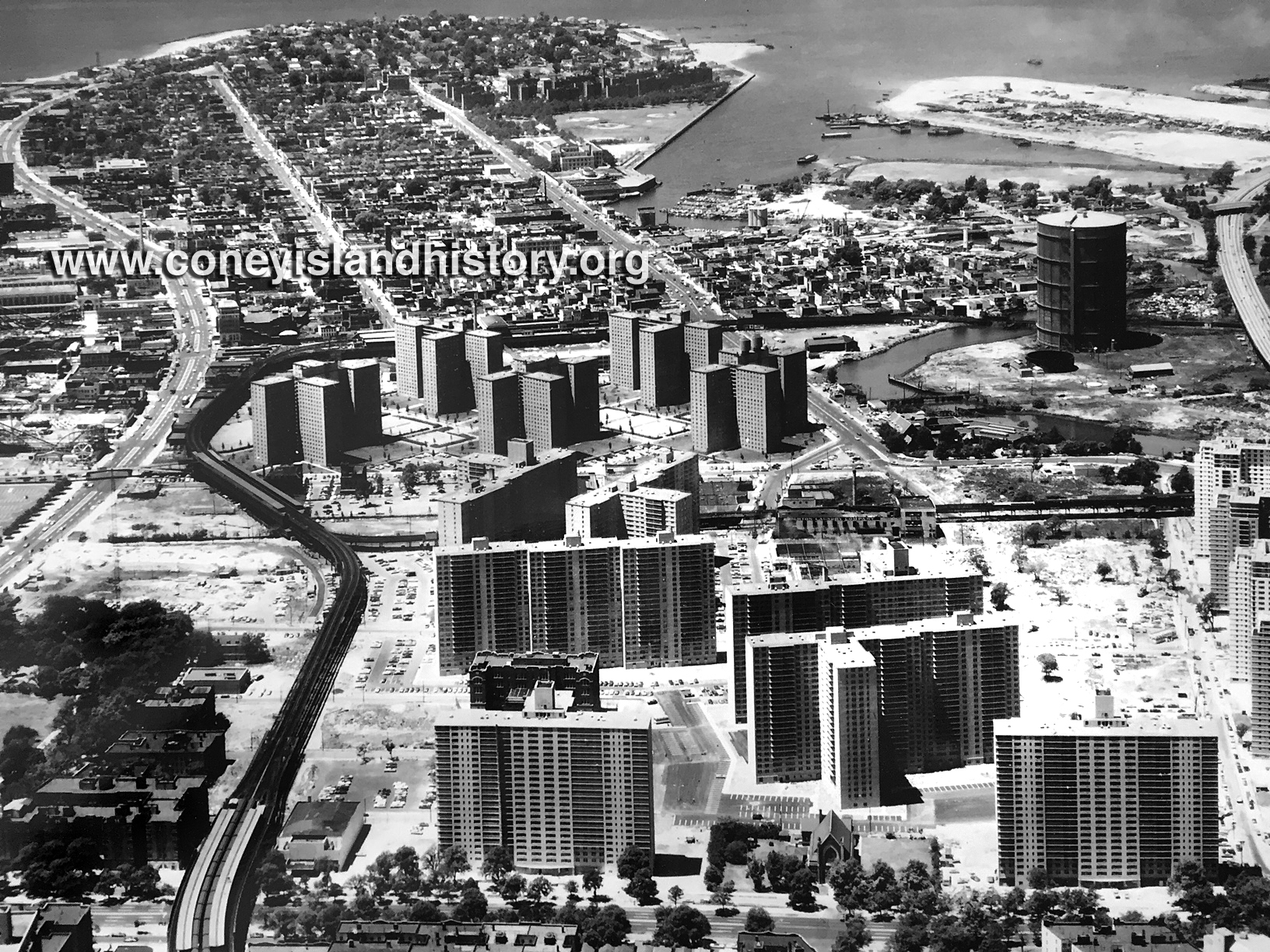 CONEY ISLAND, 1964: Fred Trump used his political connections to steal the Trump Village site from the United Housing Foundation (UHF). Trump Village, foreground, was completed in 1964. The former residents of the site were relocated to the bungalows of Coney Island's West End. Behind Trump Village is the Luna Park housing complex. Trump lost the Luna site after he was blacklisted by the federal government. The entire West End of Coney Island (top left) was later razed for NYCHA housing projects.

After selling the Steeplechase property to the city for a $1.4 million profit, Trump lost his political connections and his ability to acquire the large building sites that enabled him to gain windfall profits at public expense. Gwendolyn Blair, author of “The Trumps: Three Generations Who Built An Empire,” described Trump’s state of mind after losing the Steeplechase battle: “He was exhausted. It was time for someone else to take over – someone with the energy he had once had. His second son, Donald, would not solve the problems at Coney Island. Neither would he devote himself to finding a less problematic building site elsewhere in Brooklyn. . . . “He would go where only the sky was the limit. He would go to Manhattan.” The Trump organization sold its last Coney Island property during the rezoning of the neighborhood in 2009.

Thank you for this article. I was very young when I remember having to move from our house on Neptune Avenue between West 33rd and 35th streets. Now I know why the 'city' bought it. The house was directly across from PS 188.For years mother's family lived on W 30th street between Neptune and Mermaid. There were cousins, Aunts, Uncles all living on that street. My parents were married and settled in Coney Island. Then we had to leave. Didn't go far, just to Sheepshead Bay. What a shame. Visited last year after many years and it was such a disappointment. Wish I hadn't gone. Miss it.

It seems that Joe $itt and Thor Equities was following Fred Trump's business model with Astroland and the rest of the properties he snatched up in the late 90s-early 2000s. Like his predecessor, $itt bought up a lot of properties in the Amusement area hoping he could grease his way to a zoning change and build contel towers on the South Side of Surf. When he didn't get his way, he went on a rampage of demolition by neglect, destroying the Coney Island Bank, Surf Hotel, Henderson's Music Hall, the batting cages, mini golf course, W12 amusement area, go-kart tracks and more. Now the Grasshorn Building, COney's oldest surviving structure has fallen prey. Sad.

This is very interesting, and amazing reading this article.

...my parents taking my brothers and I to Coney Island...It made a deep impression upon me to this day...Shame these areas fall under the control of greedy developers...what evil f*cks those Trumps are!

Mary Trump's book led me here. Very interesting to learn about as I am a fairly new resident of Long Island. Thanks for the thorough and well-researched info!

Steeplechase and the tRumps

Steeplechase Park as well as the rest of Coney Island were a major part of my childhood in Brooklyn in the late 1950's and 1960's.
The enclosed Pavilion of Fun was enclosed, so you could enjoy rides regardless of the weather. I remember fondly the children's train the went around Steeplechase, the kiddie slides, the carousel, the human pool table, and the Steeplechase horse ride!
In September of 1964, Steeplechase was sold by Marie Tilyou to Fred C. tRump. We were shocked when in 1966, tRump had the entire park demolished because he was unsuccessful in getting the land rezoned for high rise apartments, and he had a "demolition party," where tRump had some models in bikinis throw bricks through the smile of the Steeplechase funny face. He then wanted to pay a contractor to demolish the Parachute, but fortunately, NYC gave it landmark status, and had it rebuilt.
What Fred tRump did to Coney Island was a micrcosm of what his son did to the USA five decades later. Thankfully, the American voters and myself had our say, and OVERWHELMINGLY rejected the bloodletting of the evil of the tRumps.

This history was really interesting to read. My father was very active when we moved from 27th street to Trump Village the second week that it was open. I have pictures of plans that were proposed for Coney Island. Does anyone know who I should get in touch with to share this information?

NEW in the Coney Island History Project #OralHistory Archive: Ansen Tang, ED of the United Chinese Association of B… https://t.co/c9Z6o7HM5T
6 days 16 hours ago