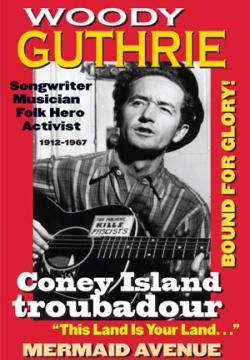 Born on July 14, 1912, in Okemah, Oklahoma, Woodrow Wilson Guthrie was the second-born son of Charley and Nora Belle Guthrie. After a childhood wrought with hard times and later seeking work as a young adult with a small family, Woody joined hundreds of thousands of people heading across the country to California during the Great Dust Bowl, the largest migration in U.S. history. After seeing the despicable living conditions that the transplanted “Okies” were living in, Woody started writing his own songs, using his show on KFVD radio in Los Angeles to give an uplifting and political voice to those who had none.

After years of traveling across the U.S., Woody headed for New York City seeking a place where his voice would not be censored. He arrived in New York City in 1940, at the age of 28. It was here that Woody wrote what was to be his best-known song, “This Land Is Your Land.”

In New York, he met and married Marjorie (Greenblatt) Mazia, a Martha Graham dancer. They moved to Coney Island in 1943 to be near his in-laws, who lived in the Sea Gate community. It was at 3520 Mermaid Avenue that Woody and Marjorie raised their children, Cathy, Arlo, Joady, and Nora. Woody composed his popular children’s songs based on the close-knit relationship he had with his kids: “Put Your Finger,” “Riding In My Car,” “Why, Oh Why,” and “Howji Do,” to name a few. They lived in Coney Island until 1952.

During these years, Woody was exposed to Coney Island’s Jewish community through his mother-in-law, Aliza Greenblatt, a Yiddish poet. Inspired by this relationship, he wrote a remarkable series of songs reflecting Jewish culture, such as “Hanuka Dance,” “The Many and The Few,” and “Mermaid’s Avenue.” Many of these songs were recorded on the Klezmatics CD’s Wonder Wheel and Happy Joyous Hannukah.

After developing symptoms of Huntington’s disease, Woody was hospitalized in 1954. He continued to write songs as long as he could during his 15-year hospitalization. Woody Guthrie died on October 3, 1967, at Creedmoor State Hospital in Queens, New York, leaving behind a rich legacy that is still being discovered and recorded. During his lifetime, Woody Guthrie composed over 2,500 songs and created over 60 paintings and illustrations. He is called the godfather of folk music for inspiring Bob Dylan, Bruce Springsteen, and hundreds of other musicians.

In 2008, when Woody Guthrie was honored at the Coney Island Hall of Fame ceremony at the Coney Island History Project along with an exhibit “Woody Guthrie’s Coney Island Years,” History Project director Charles Denson put up the commemorative plaque at 3520 Mermaid Avenue, where the Guthries had lived.  The building was demolished in 1972. On July 14, 2012, the Guthrie,family returned to Coney Island along with musicians Billy Bragg and Steve Earle to celebrate Woody's 100th birthday with a concert of his music. The celebration included a visit to Mermaid Avenue and a solemn ceremony on the beach, captured in this film by Charles Denson.