Dear Mr. Coney Island...
When I was small there was a storefront that had a placard in the window of an article about LIDA MEDINA, the world's youngest Mom and a lifesize display of Monkey's playing poker. Was this the wax museum? where was this located and what happened to the Monkey's? Thanks!
- Meryl V

You are correct. The poker-playing monkeys were located in a window display at the Bowery entrance to Lillie Santangelo's World in Wax which operated in Coney Island from the 1920s until 1984. The museum also had an entire exhibit featuring Lina Medina, the world's youngest mother, a Peruvian girl who gave birth at the age of five.

The display of animated monkeys (they were actually chimpanzees) was called "Cheating Cheaters,"because all the simian players had extra cards hidden up their sleeves and under the table and were obviously cheating! After the waxworks closed, the displays were auctioned off and now reside in private collections. 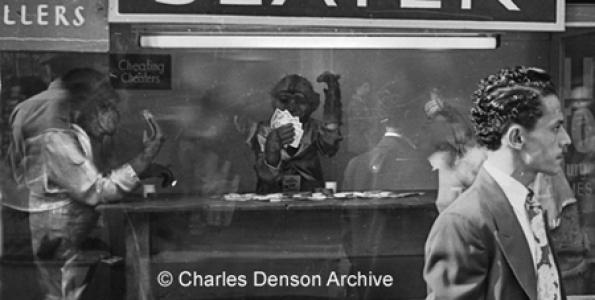 MR. Coney i would just like you to know i am only 27 years of age and i have had the experience of personally seeing the "Cheating cheaters" a few times over the years of 1987 through 1994. They are located in staten island in a private collection. They were well cared for and maintenance was regularly kept on them so they were always in working order until, they were put in storage in 1994.

thank you for this page.

Hi Mr. Coney,- HA HA A memory of the animated chimpanzees; “Cheating Cheaters,I as about 9 yrs old with my sister and 2 other cousins standing in front watching the chimps. My father was standing behind us a little away. All of a sudden the Chimps began taking to us- we had on the Coney Island colored Hats with the big yellow plum feathers- The chimps were talking to each one of us-(ie) if we took off our hats -one would say something- or the one in front right had cards hidden under the table holding it with his feet-made comments to us like "don;t say anything about my extra cards' and sayings like that-It was so surreal to us kids at the time- I remember we looked around and under the display for a speaker or something and the Chimps saying -Hey what are you looking for-it's us really talking- It really scared us. How did they know what we were doing/ They were just a mechanical display! I remember staring and staring trying to see where those voices were coming from Well, There was a short Man wearing a dark Fedora hat standing to our left of the display against the wall with a small smile on his face. We didn't know it until we got home that night and my father told us, The man was a Ventriloquist with the illusion throwing his voice for us gullible kids. We never saw him again ,even after several times to Coney Island we looked for him. i wonder who he was? It was like yesterday this all happened and clear s a bell. I'm 60 yrs old now and always tell this story. i always wondered what happened to that display and i see it was auctioned to private collectors. It would be a thrill to see it again . HAPPY MEMORIES!

Wow, this brings back great memories. I was 11yrs old when I started working on the island. My first gig was with Lillie. She would be in the booth do the roll call of all the attractions that were inside, I could here it now. "Roberto Climente, Ann Frank etc. I was this little young black kid that would take the tickets of customers entering the museum. I remember the first time I got to sit in the booth and get that mic to showcase my new talent, 11 yrs old announcer. It happen the day lil decided she would go over to Nathan's for coffee and donuts and gave me my shot, I got up there and it was like a natural speaker. She was so surprised when she returned and I had sold 10 tickets calling people over with that microphone. Funny thing I would take the train late at night when I got off all the way back to Franklin AV in Brooklyn. After Lillie closed up the shop I wound up working for guy she introduced me to named jack he had to shops right across from the Himalaya I worked the shoot out the red star. They gave me a mic and apron and I went for it.

"Come on over, come on over and see the wonderful World of Wax, it's never up and it's never over. See Roberto Clemente, gloria de Puerto Rico, died on a mission of mercy to Managua, Nicaragua. See Carl Chessman as he goes to his death in the gas chamber; the lovely Lina Medina, from Peru, she had her baby when she was just 5 years old; come see President John F. Kennedy and his brother, Bobby as they meet in our White House setting with their friend in life, the late, great, Dr. Martin Luther King Jr. John Lennon, Adolph Hitler, and Dr. Albert Einstein the father of the atomic age. Come on over and see the 2-headed baby from Ponce, Puerto Rico, and other wondrous sights."

We'd stood in the Coney sunshine watching her spiel for a while and when she paused and saw us I'd told her that i was a trained, professional, experimental director from London, Paris, and Manhattan's Theatre Row, and that she was truly wonderful. "Oh, really?" She said, with the coyness of an adolescent, smiling, "Come on in, I'll let the two of yous in for a quarter!" she'd said as she gazed down from her World's Fair booth, mic in hand, the first time we met.

Dear Lillie, she taught me so much about the theater, as much as the Royal Academy of Dramatic Art, London or the école Jacques Lecoq ever did; folks'd be hell bent from the Coney Island subway to the beach and we'd stop 'em in their tracks with just her spiel and a mic and get 'em to come across the road and pay a dollar to come into our shadowy exposition of the good the bad and the crumbling; I remember Adolph Hitler had spent one winter too many near the steam heater and had melted somewhat giving him the facial characteristics of someone who'd had a stroke down the left side of his face completed with a palsied left hand. The weirdest thing about the exhibition, perhaps, was that all the women, victims or other misfortunates of various ages, were dressed in Lillie's own retired clothes and under garments, curious, given the bloody maihems in which most of them were to be found.

Lillie took me in that day, when i told her my performance pedigree, she said she'd start me off at $5 an hour and keep me if i was any good at bringing the people in. I guess i must've been okay, she kept me for the summer till the cold mist rose up from the ocean that fall and I had to move on with my life. Lillie Santangelo was one of the great teachers in my life.

What ever happened to the creepy fortune teller doll that was outside the west 5th street trolley station on surf avenue?