Nathan's Neon Sign
posted on Jul 10th, 2021
Dear Mr. Coney Island...
I pass this neon sign every week and see in one hand he has a tray with a hot dog, fries and a soda…but what is in the other hand? It looks like an old camera. Thanks.
- Don Loggins

Hi Don,
The hot dog on the sign is holding an old-style Nathan's take out box with a handle! 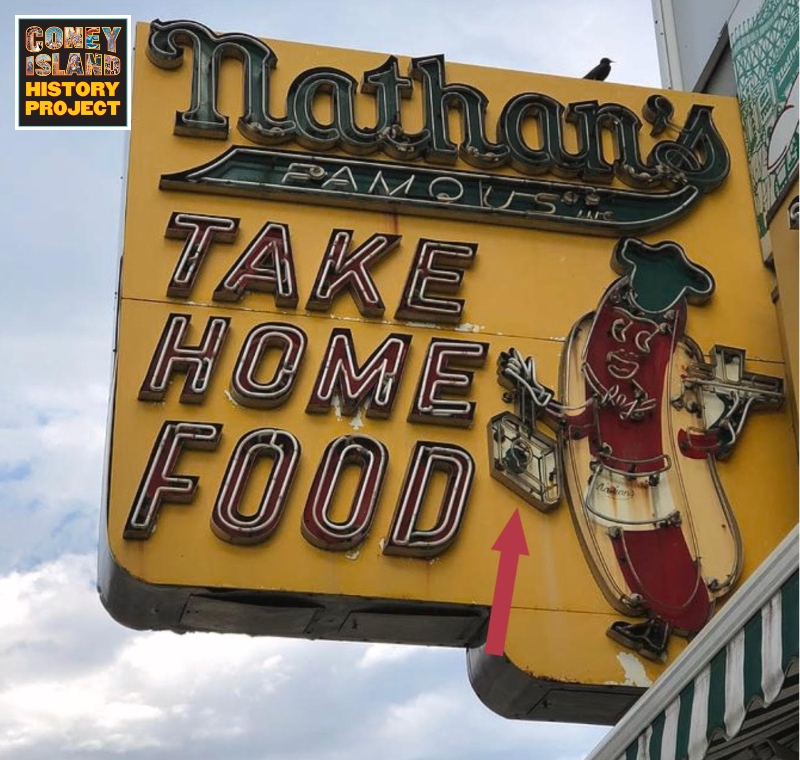 1940s Photo on Coney Island Beach
posted on Jun 12th, 2021
Dear Mr. Coney Island...
I have a picture of my mom and my oldest brother who are both now deceased.  Before my brother died he told me that this picture was taken on Coney Island Beach.   I plan to visit one day soon and find the exact spot they were sitting at on the beach.  I notice that the tower behind the Ferris wheel is no longer there.  I believe this picture was taken in the mid 1940's.   Just wondering how far was she from the Ferris wheel?
- Linda Brown-Terrell 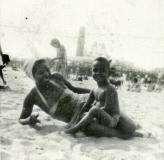 Hello Linda Brown-Terrell,
This photo was taken on the beach at West 10th Street in Coney Island. The dark tower is the old Feltman’s Restaurant powerhouse chimney, demolished in 1962. The Wonder Wheel is behind it and still exists today, celebrating its 100th anniversary last year! If you go to the beach at West 10th, behind the Cyclone Roller Coaster,  facing the Wonder Wheel you will be in the exact spot that this photo was taken! Let us know when you get here, and if we’re open, we’ll guide you. . .
Best,
Charles Denson

Old Garden
posted on May 12th, 2021
Dear Mr. Coney Island...
When I was a student in NYC in 2007, I spent a lot of my time photographing a wonderful group of people who tended to a garden  and I forget where that garden used to stand. It was off of Mermaid Ave. and I wanna say 21st St. Any help would be greatly appreciated
- Jason 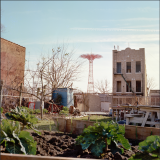 Hello Jason,
The garden was on West 20th Street on Mermaid. Unfortunately, the garden and building in the photo have been demolished and are being replaced with a high rise residential building. Here’s the site during construction. So many of the wonderful community gardens in Coney Island have been destroyed by development. 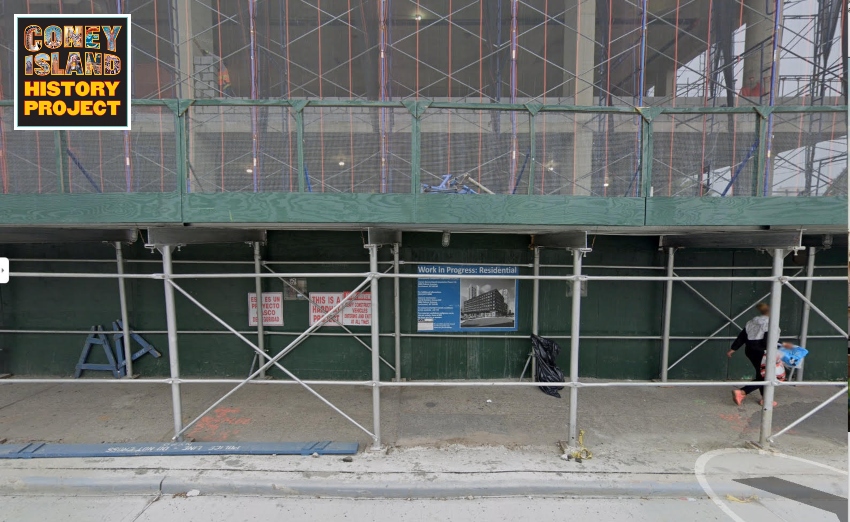 I got this photo off the 1940’s NYC site. My dad and his friends rented what I believe would have been the bungalow on the left in this photo. My recollection is we went there in early to mid 70’s. What I remember most was being able to walk under the boardwalk to the beach or go up a staircase to the boardwalk. The staircase would’ve been added later but you can see how it would work. My brother seems to think that the bungalows were more likely on W35th, but agrees that they looked like this. I remember being very close to Seagate and what I think would’ve been remnants of the Ocean Tide. If this pic is where we would’ve stayed then to the right would’ve been a small hotel and a pizzeria (Marios?). Any thoughts, info or photos would be greatly appreciated.
Thank you 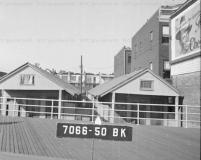 Hello Tom,
The bungalows were between 32nd and 33rd, Right next to Larry and Vinny’s pizza.
I have documented them for many years. Not much left now, just ruins at ground level where there’s a cat colony. Would like to hear more about your Dad and the bungalows! Let’s talk.
Here’ s a photo I took of the bungalows twenty years ago.
Best,
Charles Denson 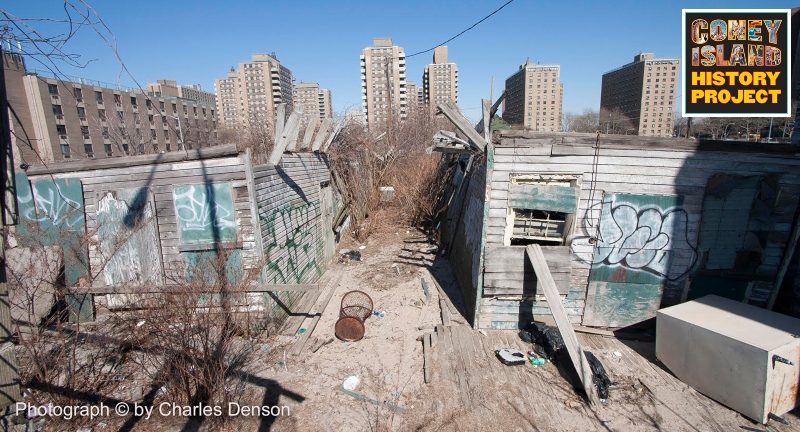 Jack Ward
posted on Mar 15th, 2021
Dear Mr. Coney Island...
My uncle was Jack Ward. It's hard to believe it's been ten years since he passed, way too early in life. I'm reaching out just say hello and wondering if anyone could share some stories about him. Jackie was a favorite uncle and great man. He was close with Charles Denson but I can't find an email address for him anywhere. Take care. God Bless. Stay well.
All the best,

Hello Ward,
Jack was the heart and soul of Coney Island and he is missed. It’s just not the same without him.
Please listen to Jack’s oral history on our web site. We’ll send the names of some of his surviving Coney Island friends for you to contact.
https://www.coneyislandhistory.org/oral-history-archive/jack-ward 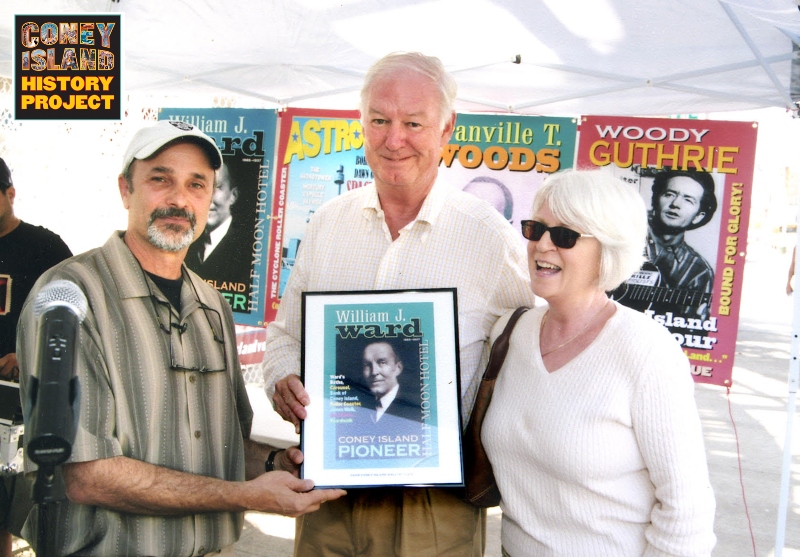 I grew up in Brooklyn during the forties and fifties.  My folks would take me to Coney Island many times.  It was always fabulous!
There was a waffle shop on the boardwalk for many years.  The waffles were an oval shape but stretched out to be able to hold three balls of ice cream.  The waffle irons were unique.  They were curved so that when the waffle was being made the waffle would have two identical oval sides connected by a batter strip built into the iron itself. I have never seen anything like them since then. The man running the shop had a dozen or so of these waffle irons right at the counter.  He'd keep making the waffles and when done he'd ask the customer what flavors of ice cream they would want in the waffle.  They could have three scoops of either one, two or three flavors; vanilla, chocolate or strawberry.  The scoops nestled inside the waffle and then he folded over the top part of the waffle to enclose the three ice cream balls inside.  I believe a waffle with ice cream was fifteen cents.  I have never forgotten the taste of that particular waffle and ice cream.
I was wondering if there is anything historically registered about that shop or any other people's memories of this particular vendor?
Thank you,

Hello Coney Fan,
That waffle shop was Maxie’s Waffles located on the Boardwalk at West 15th Street inside the Sodamat building.
“Three Scoops for a Quarter!” The store burned down in 1974. 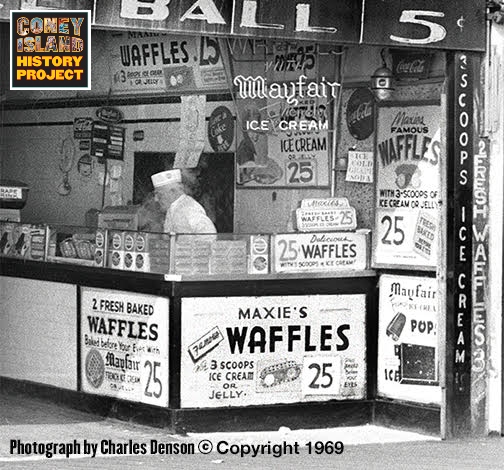 Daltons Bar and Beer Garden
posted on Feb 27th, 2021
Dear Mr. Coney Island...
Wonderful site for us Coney Island natives.
I grew up at 2953 West 35th Street near the corner of Surf Avenue.
There was a bar owned by the Dalton family just across from McCabe's bar.
My father remembered seeing his first motion pictures there in the beer garden.
Eddie and Patricia Dalton were childhood playmates of mine.
Do you have any photos of the bar and beer garden?
Thanks and keep up the great work.
- Ted Shaine

Culver Terminal and Great-Grandmother
posted on Dec 6th, 2020
Dear Mr. Coney Island...
I have this old photo of my great grandmother and was told it was taken at Coney Island.  I’ve been looking to find what building is in the background of the photo. Is it the old Culver Terminal building?  Any insight on the approximate year the photo was taken?
- Vincent Andreozzi

Hello Vincent,
Your great-grandmother is sitting on a bench in the Concourse, the little park beachfront park once  located at the intersection of Ocean Parkway and Surf Avenue. The smaller building directly behind her is Lucy Venderveer's Hotel and the dome behind the hotel belongs to the Culver Terminal Building which I believe was built around 1905-1910. The trees in the background are in Seaside Park (now Asser Levy Park). The stone wall in background was part of the park that was demolished when Robert Moses moved the Boardwalk in 1940. Her beautiful hat and dress might date the photo to around 1910-1915?

Barrels and Lifelines in the Ocean
posted on Jul 13th, 2020
Dear Mr. Coney Island...
I saw the movie Wonder Wheel and my son asked me if it was a true picture of the times.  I had one difference. When the shots of the ocean came on I said that it was not how it looked back then.  I remember the ropes and barrels.  I was considered a good swimmer because I could swim to the third barrel.  What year were they removed? - Cynthia Tyson

I also remember the barrels from my childhood! When we moved to Coney Island in 1956 they were still there, a line of colorful, striped, floating wooden barrels attached to a rope that went back to the beach. I really enjoyed playing on them. The rope was buried far up the beach and then attached to an anchor in the ocean located about halfway the length of the rock jetties. Every bay in the West End had them! You could cling to the rope or wrap yourself around the barrel. They were a lot of fun and you could prove yourself by swimming out to the last one.

I can't remember when they stopped installing them, maybe around 1960? There was talk that they gave swimmers a false sense of security and that inexperienced swimmers would swim out too far to get to the third one. Safety ropes were part of the Coney Island beach for more than a century, but the barrels seemed to have appeared sometime in the 1950s. Most likely they were discontinued to save money or maybe because of vandalism. If anyone knows the reason, please let us know.

We have very few photos of the barrels but the ones below from the 1950s give an idea of what they were like. Notice the three swimmers clinging to the rope! A sign on the lifeguard chair refers to them as "life lines," and tells swimmers not to "bathe" past the last one. They seem so much smaller than what I remember as a child. I remember missing them when they disappeared. 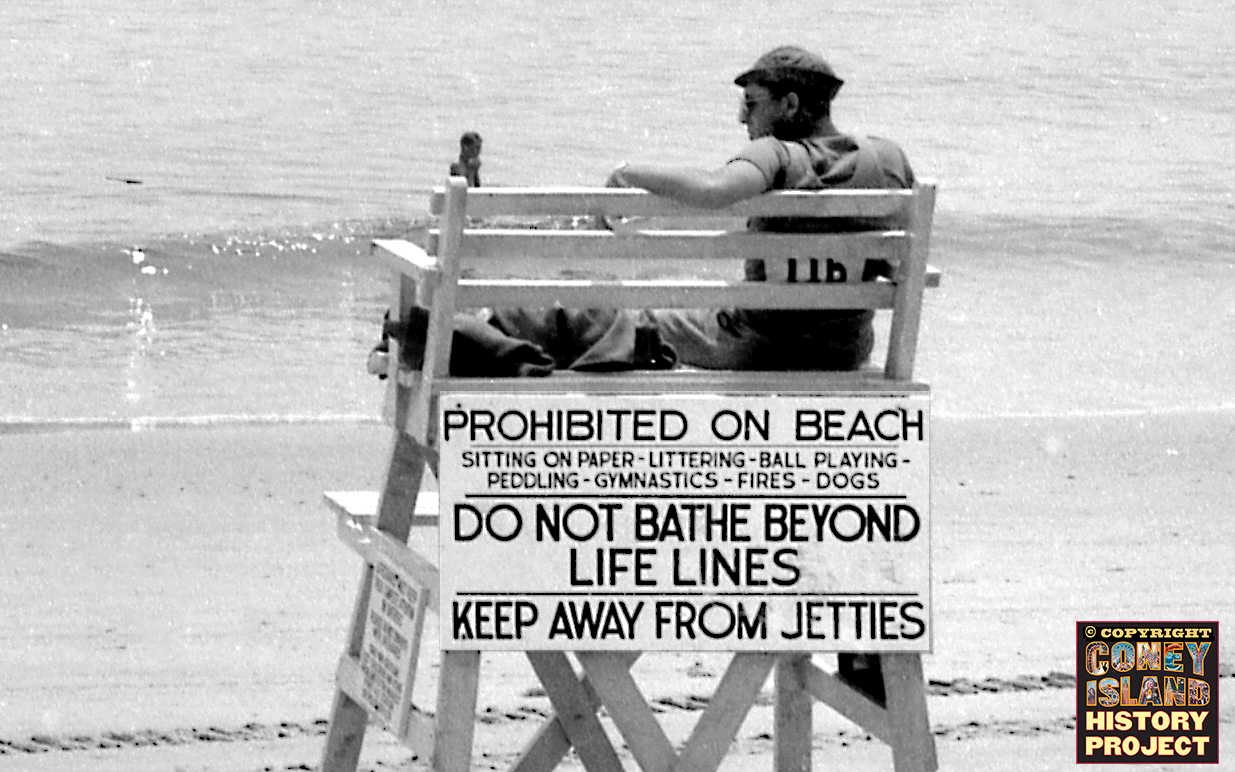 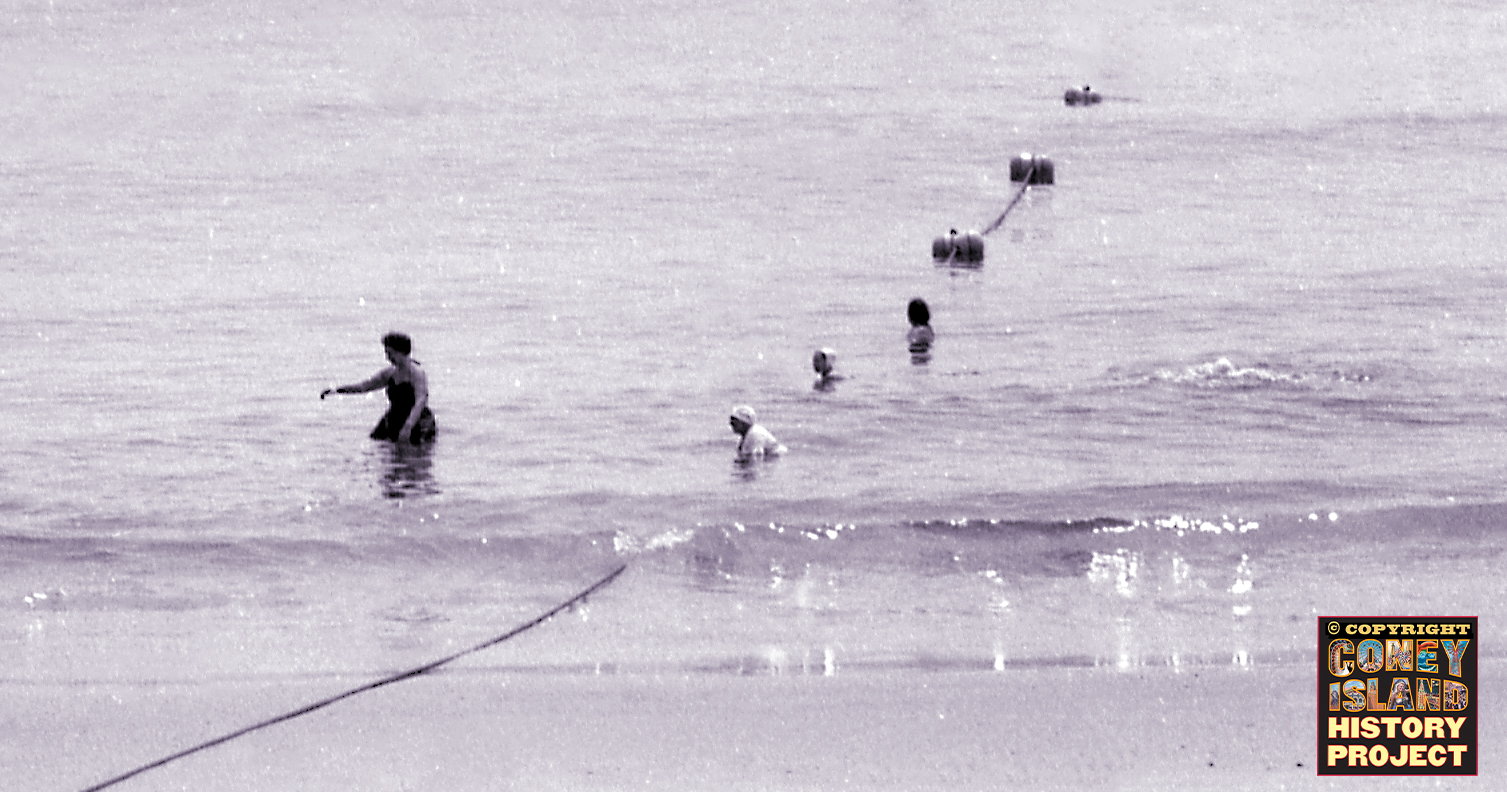 Palumbo's Fruiterers
posted on Apr 17th, 2020
Dear Mr. Coney Island...
At the corner of Neptune Avenue and 36th Street there was Palumbo's fruit store and an apartment building, which in the 1930's had a washing machine in the basement and steam heat. The other buildings were three family cold water flats. Is there a photo of the area? -Ruth Blaustein 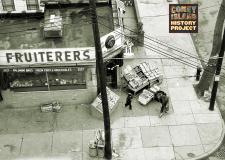 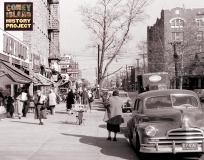 And here is a 1950s street view looking toward 36th Street with the apartment house you mentioned, and Palumbo's at center (small), and PS 188 at right.