The Wave Crest Rooming House
posted on Feb 19th, 2010
Dear Mr. Coney Island...
My grandmother lived on W 32 St betw Mermaid and Surf Avenues and I spent a lot of time there in the 50’s as a young boy. I remember a very large, old even then, Victorian house w/ turrets on the NW corner of Surf and W 32. It was always scary to me. It was just across W 32 from the closed Surf Theater. Would you happen to know anything about it or possibly a photo? Thanks for your help.
- Eric Schwelke 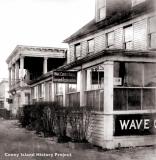 The building was an old rooming house called the Wave Crest that stood abandoned for many years. It was demolished around 1958. Here is a photograph of the building when it was in operation, circa 1920.

Tunnel of Laffs
posted on Feb 19th, 2010
Dear Mr. Coney Island...
Is that the Thunderbolt on the left in a picture of Patti Smith and Robert Maplethorpe published in USA Today dated 26 Jan 2009? I believe thay are at the west end of the bowery also on the right was a spook ride if my memory serves me right. Thank You!
- Coney Fan 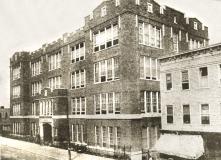 Here's a photo from our archive. We hope it brings back memories!

Jewish War Veteran's Memorial Post
posted on Feb 19th, 2010
Dear Mr. Coney Island...
Would you remember the Memorial Post which was on I think 17th street and Surf Ave. It was a newer building around 1962. We had a Drum Corp called the Surfsiders under their Sponsorship. We would have parades and compete against other Drum Corps. We would always have Nathans Catered after every event. We originally would practice opposite Nathans which was next to the Movie RKO theatre. We were upstairs where I learned to play in this Band. 1960 was the year.
- Coney Fan 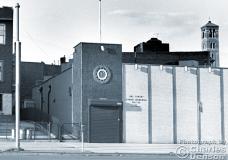 Here is a photograph of the Jewish War Veteran's Memorial Post on Surf Avenue at West 19th Street. It is no longer standing. 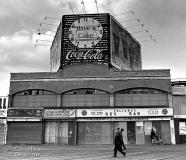 Here is a photo of the Lido taken during its last days, circa 1973.

1950's Memories
posted on Jan 19th, 2010
Dear Mr. Coney Island...
I have several vague memories of going to Coney Island in the late 1950s or early 1960s with my father. One is of a cowboy singer in a bar called the Atlantis. Another is of an animal nursery. And most vague is a boardwalk concession that had a number of soda vending machines. Do you have any information to flesh out these memories? Thanks.
- Ed Yutkowitz 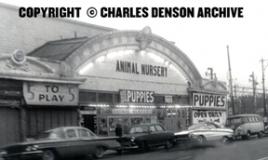 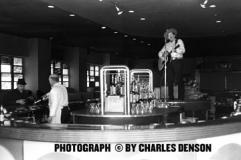 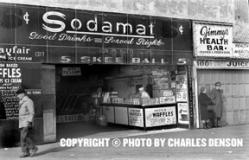 You have a good memory.

The Coney Island Athletic Club
posted on Nov 8th, 2009
Dear Mr. Coney Island...
I am trying to work out where on Coney Island the great James J Jeffries fought Bob Fitzsimmons, Tom Sharkey and James J Corbett between June 9 1899 and May 11 1900. I know they took place in the Coney Island Athletic Club, but where is that located now? I am a big fan of boxing, living in the United Kingdom. I am hoping to visit the USA to see some of the significant sites in the country. I am interested in visiting Coney Island because it is the first place a heavyweight championship fight took place in New York. My visit is a pilgrimage to the Jack Johnson vs James J Jeffries fight that took place in Reno Nevada on July 4 1910. I look forward to hearing from you.
- Glenn Wilson 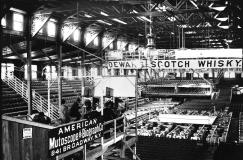 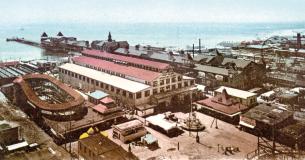 The Coney Island Athletic Club (also known as the Coney Island Sporting Club) opened in 1897 in the former Bauer's Casino bathhouse. The 10,000 seat barn-like building was located between Surf Avenue and the ocean at West 8th Street where the New York Aquarium parking lot is now located. The Jim Jeffries vs.Tom Sharkey heavyweight bout, fought at the club on November 3, 1899, was the first fight ever filmed.

Guffanti's
posted on Oct 13th, 2009
Dear Mr. Coney Island...
In the early '30's my dad lived in Coney Island, my grandfather, Alessandro Barboni had a restaurant (no one can remember what is was called or where it was). We believe that he (my grandfather) may have had a partnership with Guffanti's. Was there ever a Guffanti's at Coney Island? If so, where was it located. Grandpa closed up shop and moved in around 1932. Thanks for your help.
- Liz 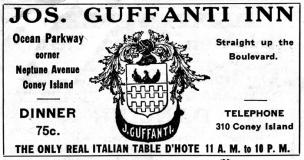 Here is a photograph of Guffanti's Inn at Coney Island and an earlier advertisement.

Jefferson Baths
posted on Sep 27th, 2009
Dear Mr. Coney Island...
I was born and raised on W 33rd Street and Surf Avenue. Growing up in the early 1970's there was a large brick house along the boardwalk, which was razed to make way for the Sea Bay Manor, the nursing home on 33rd Street. I recall the building being called the "Jefferson House" but don't know what it's origins were. I remember being about 4 years old and being inadvertently pelted by debris being tossed out of the windows by the wreckers who were clearing out the building before it was destroyed. PS: My family lived in building 1 of O'dwyer Gardens, first on the 13th floor, then the 8th floor. My mother still lives there. Thank you.
- Gerard 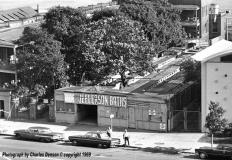 The building was Jefferson Baths, a bathhouse and summer resort built around 1910. The establishment had rental lockers, a tree-lined courtyard, bungalows, summer apartments, and a bar on the boardwalk. The complex was demolished in 1970. It was one of Coney's "presidential" bathhouses: Lincoln Baths was on West 32nd; Roosevelt Baths was on West 30th; Washington Baths was on West 21st.

The Slide
posted on Aug 19th, 2009
Dear Mr. Coney Island...
Hi I remember as a pre-teen in the early 70's a large yellow slide ride next to the parachute ride.  It was already closed when we as kids discovered it but found a hole in the fence and with a piece of rug slid down this slide all day long.  Would you have any pics of the slide with the parachute ride in it?  I also remember a piece of plywood being removed from the base of the parachute ride and going into the platform finding very old tickets which my younger brother doesn't believe we did.  Would you have any pics of the parachute ride during the early 70's?  I remember thick cables attached to the tower that might have been attached to keep it stable.  Thank you.
- Jeanett Russo

You remember correctly. Here's a photograph of the abandoned slide next to the Parachute Jump taken around 1971.

The cables were hanging loose from the top and swinging in the wind. It was easy to get into the parachute base through the open door, and, yes, there were piles of old tickets on the floor. There was also an old safe and some burned silk parachutes.

Hope this answers your question.