The Norton's Point Trolley Ramp
posted on May 4th, 2009
Dear Mr. Coney Island...
I lived in Gravesend Brooklyn for many years.  I am 56, I spend lotta time in Coney Island as a kid, I have a lot of questions, but I'll just ask one now, about what year did they demolish the nortons point, trolley ramp? My grandfather used to take me to this little luncheonette on Stillwell Ave, right next to the theater, I seem to remember the ramp but maybe not.  Thanks!
- Coney Fan 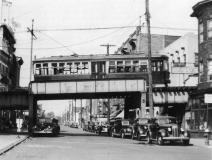 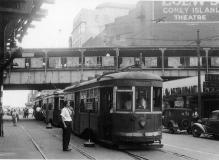 The Norton's Point trolley service ended in November of 1948 and was demolished soon after.

Pictured: trolley ramp over West 15th Street next door to Gargiulo's Restaurant.and on Stillwell Avenue next to the deli.

Washington Baths
posted on May 4th, 2009
Dear Mr. Coney Island...
As a kid I would go to Coney Island in season and off with my parents.  I have a co-worker who is interested in Washington Baths because I told him my parents rented a locker for several summers in the early 60's.  We are unclear.  I told him that the entrance was on Surf Ave only a couple blocks from the train station.  He said it was past Raven Hall... I don't remember walking down that far to get to it.  Do you know what street it was on?  Thanks in advance for the answer.
- Kathy 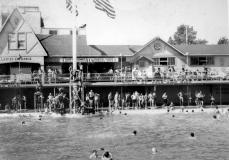 Weber's Carousel
posted on Apr 10th, 2009
Dear Mr. Coney Island...
I grew up in Coney and I remember there was a carousel not in the amusement district. It was located on the boardwalk about West 27th Street. The last thing that was there as I remember were handball courts. I want to see a picture and possibly know the name of that carousel. All I remember that it was in a tin shed (that is what I remember as a child) and that when you walked inside there was a concession stand on the left selling goodies etc.  Thank you.   PS: I was born in 1945 so the carousel I imagine was there when we use to go see the fireworks on Tuesday night. Also I very much miss Larry & Vinnies pizza. It was the best.
- Marilyn Bologna

The carousel was part of Weber's Baths on West 27th Street near the Half Moon Hotel. Few people remember that the amusement district stretched that far down the Boardwalk. It was known as the "Chafatino Carousel," carved by Illions, and named after the family that owned it when it was on Surf Avenue at West 5th Street before being moved to Weber's in 1932. It operated inside a beautiful glass pavilion until 1957 when it was relocated to Seaside Heights, New Jersey.

The Space Orbit
posted on Feb 26th, 2009
Dear Mr. Coney Island...
What do you know of this ride? It stood next to the Astrotower. It was a 16 passenger diesel hydraulic very powerful ride thad had several serious accidents, once a carload of riders broke free and was thrown into West 12 street next to the Cyclone. Eventually it was dismantled. Any ideas or pics? Thanks.
- Mike 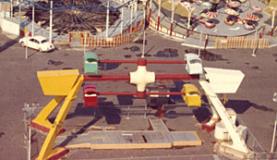 Hello Mike, The Space Orbit was an independent ride in Astroland operated by Wally Roberts for one season in 1964. It closed soon after an unfortunate accident injured several riders.

The Astroland Rocket
posted on Feb 26th, 2009
Dear Mr. Coney Island...
I saw them moving the old rocket ride in Astroland a few weeks ago. Can you tell me about the history of it? Was it a working ride at one time? What did it do?
- Saskia 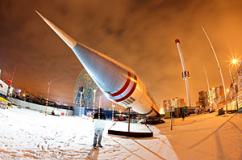 In the Shadow of the Half Moon Hotel
posted on Nov 23rd, 2008
Dear Mr. Coney Island...
I lived in this building, which stretched the entire length of the block and was, at the time, the only apartment building in Coney Island with an elevator. I do not have any good photos of the building, however, and wonder who might? The Surf Avenue side had a pool hall-- Murrays, a luncheonette at the 29th street corner, a grocery store and a wholesale candy outlet. Thanks for your help.
- Martin Sage 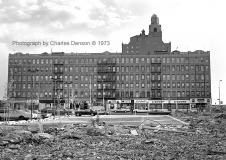 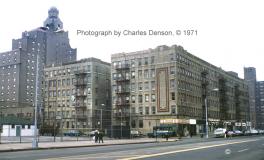 The apartment building was divided in two: the Surf and Neptune. The Surf Apartments had an entrance on 28th Street and the Neptune Apartments entrance was on 29th Street. The building was constructed at the same time as the adjacent Half Moon Hotel in 1927. Weepy's pool hall was a famous fixture for many years, as was Jimmy's luncheonette/pizza joint on the 29th Street side. The building has been replaced by a nursing home.

Tony's Rooming House
posted on Nov 3rd, 2008
Dear Mr. Coney Island...
I spent many childhood years in Coney Island between 1953 and 1960. Do you remember, or have any photos of, Tony's Rooming House on West 15th St.between Mermaid Ave. and Surf Ave.? Also, there was a rooming house, also on W. 15th St.,on the same side of the street, closer to Mermaid Ave. The address there was 2922 W. 15th St. For many years it was owned by Abe Fleminger and his family. Unfortunately, these buildings were demolished to make way for a large parking lot for Garguilio's Restaurant across the street. Anyhow, do you remember those two buildings, have any photos, or know any of the long-term residents of those rooming houses? I do recall that my mother's friends lived there -- Dave Altman, Tessie Dundee, as well as other dear friends. Any info or photos would be much appreciated. Awaiting your reply. Many thanks.
- Arlene 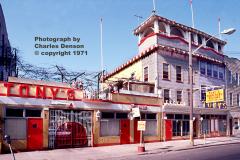 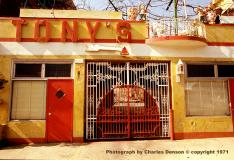 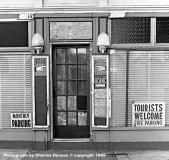 Tony's Bright Spot was a beautiful but slightly seedy establishment in a building that dated back to the late 1800s. Tony Oleva operated it until his death, and then it was run by his "nephew." It had quite a reputation. The rooming house was an SRO that also was the last hotel in Coney that catered to tourists. It was painted in bright primary colors and decorated with plaster elves, swans, and whirligigs. There was an arbor and grape vines covering the roof and parking lot. At one time the elevated trolley from Norton's point went right over half the building.

Gargiulo's restaurant bought and demolished the building in the late 70s. We'll get back to you with the other information. Hope this helps.

Candy Store
posted on Nov 3rd, 2008
Dear Mr. Coney Island...
I recall visiting Nathans in the 1960s and there being the most fantastic candy store right across the alley from Nathans on Stillwell Avenue.  There was a very old couple who ran the shop and they had the best carmel popcorn that I ever had in my life -- even until this day.  The store had giant colorful lolipops all around.  Do you have any history about this store?  Is it still standing?
- Bruce Baron 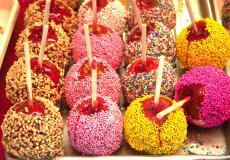 You must be thinking of Williams Candy. At the time it was owned by Al Kirsch. The good news: it's still there! Come back and have a jelly apple!

Luna Park on Fire
posted on Nov 3rd, 2008
Dear Mr. Coney Island...
I remember walking outside as a child and feeling hot ashes hitting me the day Luna Park burned down. Can you tell me the exact date and what caused the fire.
- Dolores 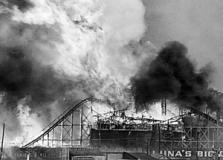 Luna's devastating fire happened on August 12, 1944. It started in the park's scenic railway on West 12th Street, but the cause is unknown.

Boxing Restauranteur
posted on Nov 3rd, 2008
Dear Mr. Coney Island...
There was a restaurant on the corner of West 16th Street and Surf Ave owned by a boxer in the fifties.  What was his name?  Thank you!
- Jimmy P

His name was Tony Pellone. He and his family had several other bars and restaurants in Coney including the Hollywood Bar in the Stillwell terminal and the Lido on the Boardwalk. "Tough Tony" was a top welterweight who fought against such champions as Kid Gavilan and Bob Montgomery. He died at Coney Island Hospital in 1996.