Kaufman family's Torture Chamber
posted on Aug 15th, 2012
Dear Mr. Coney Island...
I grew up in Coney island...and although I was little I remember being terrified by one of the side show windows that had a giant elephant stepping on a little Indian boy... do you have any info on what that place was?  Thanks!
- Candice K

The bizarre attraction you remember was the Kaufman family's Torture Chamber exhibit in the Lido Hotel on Surf Avenue at West 12th Street. A visit to the chamber was sure to cause nightmares!

Was the Parachute Jump shortened?
posted on Jun 21st, 2012
Dear Mr. Coney Island...
I have read and enjoyed your column of questions, answers & pictures. Please tell me if, during the renovation of the Parachute Jump, it was shortened. I seem to think during the mid 1950s that it looked taller.
- Felicia

Believe it or not, you are not the first to ask this question. The "shorter tower" has become something of an urban legend. The reconstruction was carefully documented and no one, including the engineers, construction workers, Landmarks Preservation Commission, Parks Department, or EDC gave any indication that the tower was altered in any way that reduced its height. Compare the two images in the accompanying photo. The 1994 image matches the current image and number of levels.

There are many other myths surrounding the Jump and two are worth mentioning:

1. Despite the numerous stories of made-up mayhem concerning the jump, no one was ever killed or seriously injured while riding it. The ride did not close because of safety issues.

2. The most annoying myth is the one caused by sloppy research from the Landmarks Commision. Although the Parachute Jump closed for good in September 1964 and never operated again, the Landmarks designation report claims that the ride operated until 1968. The report erroneously claims that Coney amusement maven Norman Kaufman operated it after Steeplechase closed. Mr. Kaufman still gets a good laugh over this error. Make no mistake about this: the Landmarks Commission has the wrong date and the jump never operated after 1964. We can be grateful, however, that the tower gained landmark status and hope that someday the Parachute Jump will operate once again!

Ocean Tide Baths
posted on Jun 15th, 2012
Dear Mr. Coney Island...
My parents who were born in 1911 grew up in the Park Slope area of Brooklyn and spent a lot of summer days at Coney Island. I just found a great photo album of my mother's and am curious about a few pictures. I am not sure, but am thinking they are all taken at Coney Island. I am wondering where they were taken, esp. img 136 which is of my uncle in front of what looked like bath cabins with a #44 on the top. The photo that is identified as img065 indicates that one is taken near "Ocean Tide Baths." Is there any info you could provide about those particular baths? THANK YOU so much for what you do! I greatly appreciate being able to ask you these questions as part of my ongoing genealogy search.
- Anne Merritt

Most of your photos were taken prior to 1920 at Heney and McCotters Ocean Tide Baths, located at West 35th Street and Surf Avenue at the West End of Coney Island. Ocean Tide had a private boardwalk and was one of the bathhouse bungalow colonies that sprang up along the beach in the late 1890s. Next door was Jefferson Baths, Sea Gate Villa, and Carlton Court. Some of these businesses operated into the 1970s. They were summer bungalows, rented for the season, but also had lockers for beach-goers that could be rented on a daily basis.

The area around 35th Street was heavily Irish and had a number of great bars and restaurants. I'll post more info later. I'm including a 1918 photo of Ocean Tide.

Joffee’s Candy
posted on Jun 15th, 2012
Dear Mr. Coney Island...
I grew up in Coney Island, living on 28th St between Surf and Mermaid from my birth in 1955 to 1965 when my family moved to Queens. I have a distinct memory that no one else seems to share. I remember a basement workplace on the corner of 28th and Surf where candy apples were made. The red kind with the crunchy candy on the outside. We would look into the basement and see bushels of fresh mackintosh apples and trays and trays of the finished candy apples on trays lined with wax paper. We would buy a fresh candy apple directly from the "candy apple man" in the basement. Is their any validity to my memory?
- Scott

Coney Island’s West End was home to many small candy factories that supplied the amusement zone. You’re probably thinking of Joffee’s Candy on Surf at West 28th, although there was another on Surf at 21st run by a man named George (can’t recall his last name). The shop on West 28th made candy canes, Jelly Apples and ribbon candies. The workers who put the plastic tubes on the ribbons were called “tubers” and the ones who bent the hooks on the canes were known as “hookers(!)”

The candy factory on West 21st made jelly apples, Twirl Pops, and the famous PANGO Pop (named for the flavors: Pineapple, Apple, Nectarine, Grape, and Orange: PANGO!) There was also Tom’s Candy on Mermaid Avenue behind the A&P. John Dorman operated Phillips Candy in the old Stillwell Terminal but moved to Staten Island after being evicted when the new facility was built. His business is still thriving on that other island.

Other factories were the one in the old Child’s Restaurant building on the Boardwalk, known for making “Peeps,” the iconic yellow Easter treats. And of course there was Bonomo’s on West 8th Street next to the Mangels factory. Bonomo is gone but building is still there with the beautiful candy-themed mosaics on the façade. Williams Candy, owned by Pete Agrapides, located next door to Nathans is the last old-fashioned candy shop and has a window full of sweet treats including jelly apples.

Stubbmann Carousel
posted on May 15th, 2012
Dear Mr. Coney Island...
My Dad would bring me down to Coney to around where the aquarium is today. He would put me on the carousel, then sit in an adjacent bar & drink beer while I rode round & round happily for hours. I could see him & he could see me. We'd wave to each other. Here too, I think there was a "Helen Hotel" upstairs. The carousel, bar & hotel was in one building. Again, the late 40's.
- Judy Brown

Surf Lanes
posted on Mar 14th, 2012
Dear Mr. Coney Island...
I was sitting by the water over near work and it made me miss Coney since I haven’t been over in months. Anyhow, it got me to wondering about where my parents met – Surf Lanes in Coney. Do you guys have any photos from Surf Lanes? Thank you!
- Scott 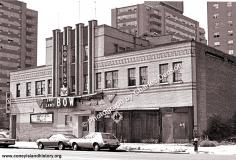 Here's a photo of Surf Lanes on Surf at 32nd Street taken shortly before it was demolished. It was formerly the Surf Theater and I remember it well because it was where I saw my first movie at the age of three. It became a bowling alley around '58 or '59. Also had a great bar! The yellow Art Deco building survived the urban renewal project that brought us the surrounding O'Dwdyer Gardens housing project but was torn down around 1980. The empty lot became an urban vegetable garden, and recently the site of a senior housing development.

Sunny Boy was the name! It came in little waxed-paper containers. The distributor was located on West 36th Street and Neptune Avenue.

Child's Restaurant
posted on Mar 7th, 2012
Dear Mr. Coney Island...
You have been so helpful to so many people and I appreciate it very much. Could you please give me the name of this building & what it was used for. Thanks!
- Jeanett

That structure, with its nautical themed terra cotta, is the former Childs Restaurant Building, built in 1924. There were once over 90 Childs establishments in NYC. The building is an official NYC landmark and will someday be restored as a restaurant and catering hall by Taconic Investment Properties, the company that has a 99-year lease on the property.

Romanian restaurants on Surf Avenue
posted on Mar 7th, 2012
Dear Mr. Coney Island...
My Great grand uncle was Lazar Hann. According to family history, he and his wife, Fannie, owned and operated a restaurant at Coney Island around 1910-1920. We were told that it was the first Romanian restaurant at that location. Can you confirm this? Or, provide the name of the cafe ? Thanks so much for your help.
- D. Preston

Bushman Baths
posted on Feb 14th, 2012
Dear Mr. Coney Island...
I hope you can help. My mother died recently and in cleaning out the house where she lived i came across a photo album with many pics of the 1920's and 30's of my grandmother and grandfather on my fathers side. There were many pics showing scenes on a beach with what looks like a beach club and some kind of elevated wood structure in the background. This structure does not look like a boardwalk. One pic, which i attached, shows my grandfather with children in front of him and in the upper left a building which i can only make out a partial name ...... *hman Baths and Restaurant. I believe this bath is either Coney Island, or somewhere in Brighton or Manhattan Beach, and if you can identify it, you would help in putting together a little piece of family history for us. Thanks so much in advance!
- Joseph Tague

The date of this photo is circa 1921-22 and the building in the background is Bushman Baths, located at West 15th and the Boardwalk (which is under construction in the photo, completed in 1923.) Bushman Baths burned in 1973. Note the spelling change in the name (they dropped the "c" somewhere along the way.)