I love your website. What a treasure trove of memories! Could you tell me where the building in this photo is (was?) located on Coney Island? I assume that we are looking at the front of the building as it faces the beach. Do you have any info about it?
Many thanks,
Elaine Marino 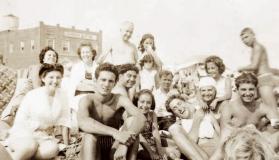 Thank you for contacting the Coney Island History Project! The building in the background was located at West 32nd Street and the Boardwalk. It was an extension of Lincoln Baths that was added when the Boardwalk was built in 1923. There were apartments on the second floor and a great restaurant at the  Boardwalk level called Sam's Knishes. Next door was Larry and Vinny's Pizza restaurant. Lincoln Baths was demolished in 1981. Looks everyone in the photo was having fun!

Half Moon Hotel
posted on Mar 23rd, 2020
Dear Mr. Coney Island...
I've been searching online but have not been able to find any interior pictures of the Half Moon Hotel. Any advice? Many thanks and Best Regards, Jim Jabara

Here are some images of the hotel's interior. 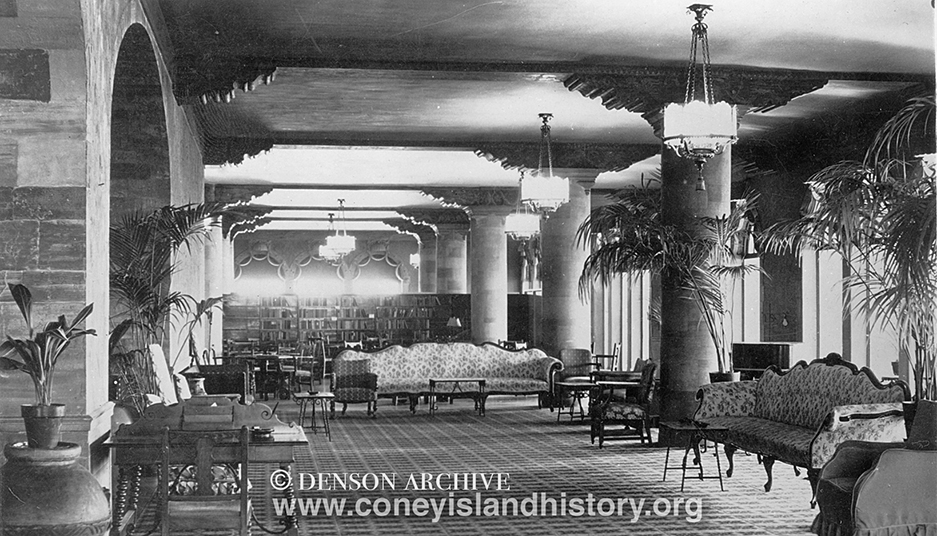 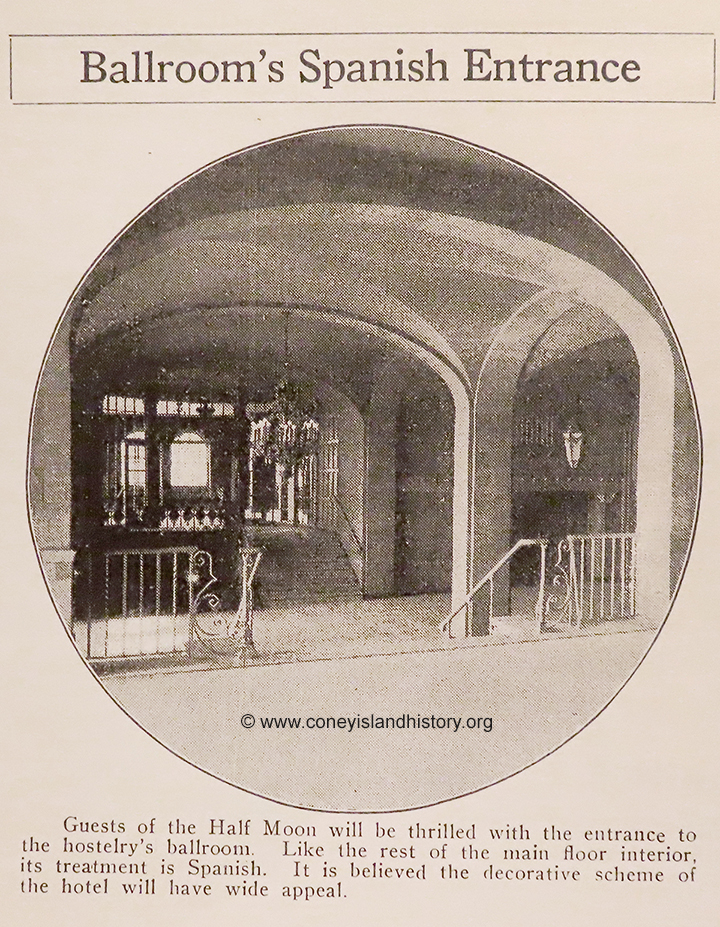 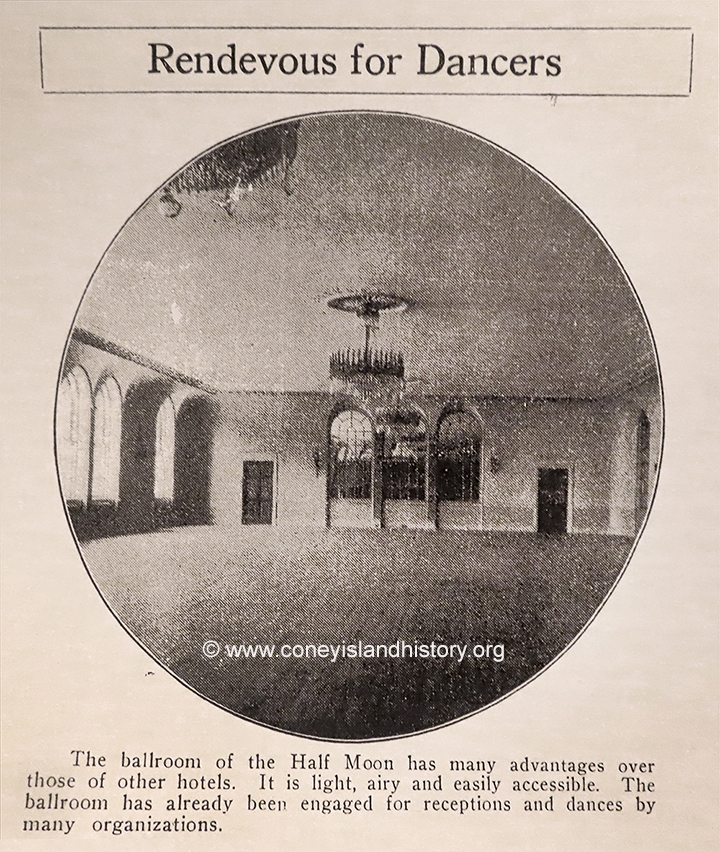 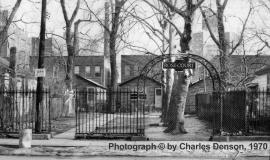 Rose Court and most of the homes and bungalows on West 36th Street were demolished by the City in 1971 as part of urban renewal. There are now two-story row houses on the site.

Mystery Photograph
posted on Apr 21st, 2018
Dear Mr. Coney Island...
This photo was in my grandmother's box of photos.
I put it on FB old images of NY. Some think it's Coney Island. Maybe it's outside a bathhouse along a subway track? Maybe that is the Williamsburg Saving Bank Tower in the distance.
Recognize anything?
Thank You!
- Gary A. Wexler 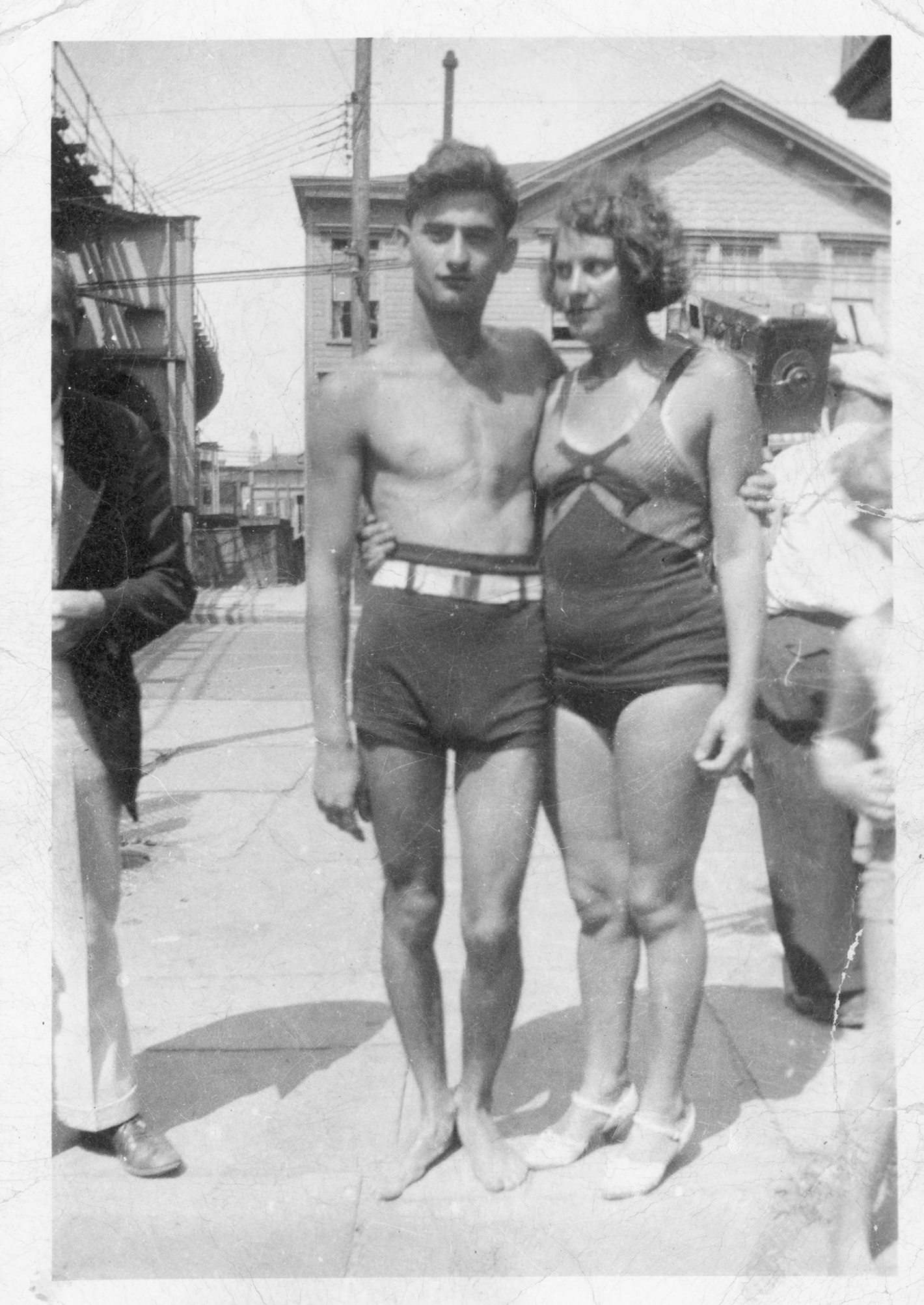 Hello Gary A. Wexler,
Your grandmother's photo was taken in Coney Island at West 5th Street next to the el in an area once known as "The Gut". The view is looking west and that’s the Luna Park tower in the far background. The beach and Municipal Bathhouse are one block away.
Here is a photo of that location today. The building in the background of the early photo was demolished to build Trump Village high-rises in the early 1960s. The Trump parking lot currently occupies the site. The red and white high-rises in the far background are called Luna Park Houses and occupy the former site of Luna Park. Hope this helps. 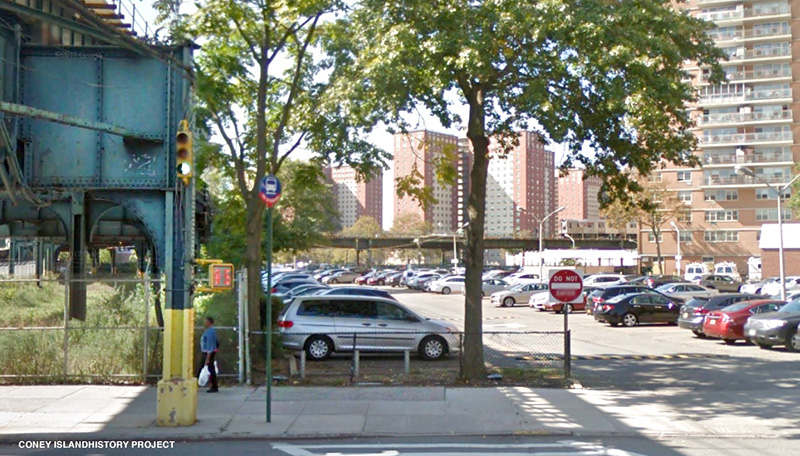 Photo
posted on Apr 9th, 2018
Dear Mr. Coney Island...
Hi there! I am sending images of a photo I purchased in an antique shop. I have been trying to identify where it was taken and when? I had guessed it is from late 1800's - early 1900's, east coast? I stumbled onto a story about Hotel Brighton and thought this might be a photo of it? Please at your convenience take a look and let me know what you think? The photo started as just a cool decoration for my home and brought so much interesting conversation that I thought I would like to visit there. Sadly if it is Hotel Brighton we can't go there but I have never been to Coney Island! Funny where life takes us. Thank you for your time.
- Leigh Roeger 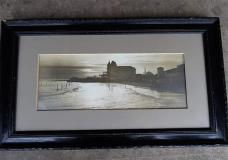 Sir,  While doing family research I learned that my great aunt, Lena Dolle Petersen, and her husband, Magnus owned a hotel called the Petersen Hotel which was located (at the turn of the 20th century) at 10th Street and Surf Avenue. I believe the Petersens also were involved in some type of amusements as Lena was the sister-in-law of the famous carousel builder, Charles Looff who placed the first merry-go-round at Coney Island in 1874.  Do you have any information on this family or, in particular,  Petersen's Hotel?  Pictures would be a bonus!
Looking forward to your reply I remain
Sincerely,
Rudolph Dolle 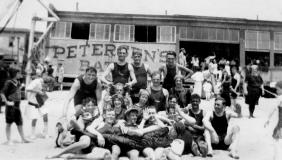 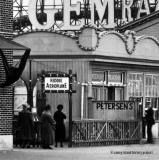 Petersens Baths and Hotel was located on the beach side of the Feltman's Restaurant property at West 10th Street. Here are two photos. One dates to around 1910, the other was taken after the Boardwalk was built in the 1920s.

Steeplechase Three Ring Carousel
posted on Oct 25th, 2016
Dear Mr. Coney Island...
I've been doing a search to find images, pictures and films/video and audio showing the incredible Classic Three Rotating Ring Carousel that I remembered, as a young boy, that was housed in the huge indoor Steeplechase Park. As a young boy in the 1950's I had been amazed at the mechanical complexity of such an amazing machine with its 'Three Counter Rotating Ride Rings', Beautifully Hand Carved and Lovingly Painted Motion and Still Horses, and the Powerful music that came from the Huge Mechanical Full Orchestra and Organ/Calliope. I was born and raised in Brooklyn and Coney Island was a regular venue for our family entertainment. I'm hoping you'll be the one to help restore this childhood amazement to me! Regards, namaste
- David 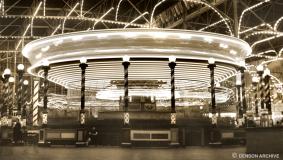 That would be the El Dorado Carousel, now located at Toshimaen Amusement Park in Tokyo. This magnificent machine was carved by Hugo Hasse of Leipzig Germany in 1902. In 1910 it was moved to Coney Island and installed in a building Surf Avenue at West Fifth Street. The carousel survived the 1911 Dreamland Fire, blistered but intact. George Tilyou brought the El Dorado to Steeplechase Park in 1912 where it became the centerpiece of the Steeplechase Pavilion. It was sold after Steeplechase closed in 1964.

Dante's Inferno
posted on Sep 13th, 2015
Dear Mr. Coney Island...
Was there ever a Dante's Inferno haunted house or ride at Coney Island?  Someone has told me that there was.  If so, is there a good reference book to use in trying to track it down?  Or a good website?
- Dennis Looney 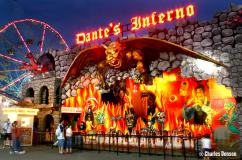 Dante's Inferno was located on the midway at Astroland Park. The ride was dismantled when Astroland closed and is currently in storage. For more dark ride information try Laff in the Dark, the ultimate website about dark rides.

Crown Bar and Clement Hotel on West 15th Street
posted on Sep 13th, 2015
Dear Mr. Coney Island...
Hello!  I found your website while looking through some old Coney Island photos. I saw a photo of Tony's Hotel on West 15th Street in Coney Island! It brought back so many memories. I spent the evening looking for a photo of the  Hotel Clement - located on the other side of the same street.   As a kid - during the late 50s and early 60s, I would accompany my grandmother to Coney Island from New Jersey.  She went to Coney Island each year for the beach and for the hot baths. The place for the baths was called Bushman, I think.We stayed each year for two weeks at the Hotel Clement. It was just down the street from Gargiulo's Restaurant and next door to a local Fire House. I didn't find any pictures of West 15th Street - other than Gargiulo's and Tony's Hotel.  Can you direct me to a site where I might find a picture of the Hotel Clement? I'd greatly appreciate it.
- Anthony 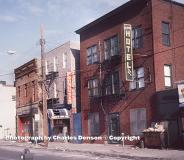 Here is a photo of West 15th Street showing the Clement Hotel, Dempsey's Crown Bar, the Firehouse, and Gargiulos. All of these buildings except Gargiulo's Restaurant were demolished several decades ago. The firehouse was demolished on its 100th birthday in 1995. 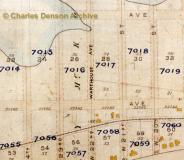