Old Photos
posted on Oct 21st, 2010
Dear Mr. Coney Island...
I am guessing that these pictures were taken around 1912. My question is are they pictures of Coney Island and if not do you have any idea of where they might have been taken. In the picture of the beach we can read "Petersen's Pavilion" and "Stauch's Baths". In the boardwalk picture you can read "Klondike Pioneer Placer Gold Mine". Thanks!
- Gary Long 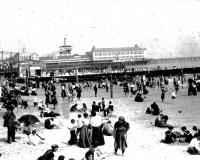 One of your photos was taken on the Coney Island beach looking east. It was taken before 1911 because the large structure on the pier is the Dreamland Ballroom, which burned in 1911. The tower in the center is the top of Dreamland's Shoot-the-Chutes. Ward's boardwalk can be seen on the left, and behind the Stauch's sign is Petersen's, a bathhouse located behind Feltman's on Jones Walk. The beach is extremely narrow and was not expanded until the Boardwalk was built in 1923.

Recording studio
posted on Aug 28th, 2010
Dear Mr. Coney Island...
About 1946 my family visited Coney Island. My older brother and I made some records there. Both of us sang a song and it was broadcast over the loud speaker and recorded on records. The records have long since disappeared but I wonder if you might have any information about this recording booth? Thank you!
- Ann Marie 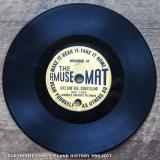 "Voice-O-Graph" machines resembled phone booths and there were at least two dozen of them located in arcades all over Coney Island in the 1940s. The machines were manufactured by International Mutoscope. The company also made the Photomatic photo booths that printed black and white photos in a small metal frame. In the 1940s it would have cost 25 cents to record a record and a personalized label with your name on it was extra. You could sing a song or record a birthday message.

Your voice was recorded at 78 RPM, a technology that's hard to find today. The machines switched to 33 RPM in 1957 and some were still operating in Coney Island through the mid-1960s. Here is a picture of a record that was recorded at AmuseOMat arcade on Surf Avenue.

Would love to hear your recording!

Villanova Court
posted on Jul 15th, 2010
Dear Mr. Coney Island...
I am writing to inquire: what do you know about Villanova Court, a bungalow colony at the end of Coney Island, right before Sea Gate begins? It would have opened in the 40's or 50's and I think it closed at the beginning of the 1970's. A nursing home or medical facility took its place. Any information, including the names of the Villanova Court owners and their history tied to the bungalow colony, would be greatly appreciated. I would love to forward any and all info and pictures to two of my elderly relatives, who remember the time and the place very fondly. Thank you very much.
- Andrea 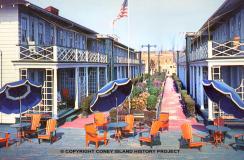 The rustic Villanova summer bungalow colony was located on West 37th Street between the Boardwalk and Surf Avenue. It opened around 1910 and was demolished in early 1970. Villanova Court was one of the dozens of popular resort colonies in the West End of Coney Island that flourished during the early-to-mid 20th century. Nearby were Sea Gate Villa and Jefferson Baths, two seasonal businesses that survived until the early 70s.

A 1950s advertisement for Villanova listed its amenities as: "an outdoor pavilion, television, hot and cold showers, steam room, handball court, washing machines, telephone service, and private entrances to the beach and Boardwalk."

Attached is a photograph of Villanova taken in the 1950s. 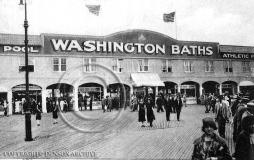 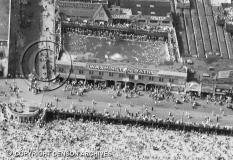 Here are some photos of Washington Baths during its heyday in the 1930s.

It was located between the Boardwalk and Surf Avenue at West 21st Street. The Washington Baths Annex (also known as the "Pink Palace") was a block away at West 22nd Street.

When the Wonder Wheel was new
posted on Jun 16th, 2010
Dear Mr. Coney Island...
I was wondering if you could confirm if that is indeed the wonder wheel in the upper left hand corner....if it is the wonder wheel then it must be close to brand new since this is a picture of my uncles and they were born in the 1920's or so. Also i am wondering if the construction to the right is the boardwalk....any idea where this could have been taken???? Thanks!
- Patty 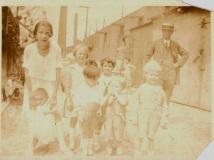 Yes, that is the Wonder Wheel. The picture is looking north from the beach at Jones Walk next to Feltmans (the Feltmans powerhouse chimney is in the background.) Peterson's Bathhouse is on the right and Ward's Bathhouse is at left. The Wheel opened in 1920 so this photograph was taken when it was a new attraction.

Whale Exhibit
posted on Apr 24th, 2010
Dear Mr. Coney Island...
I have a very clear memory of a huge whale washing up on the beach at Coney Island. It was moved to an indoor exhibition space right next to Nathan's. The smell became unbearable, so the entire display didn't last long, but no one else I know remembers it. Do you have any information about it? It had to be around the mid-1950's. Thanks so much!
- Phyllis 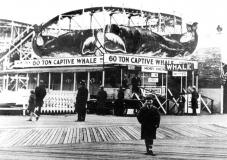 The 75-foot finback whale washed up in 1954 and was hauled to the alley behind Nathan's and displayed at 50 cents a peek. The carnies who hauled the whale from the beach pumped preservatives into it but the chemicals only added to the horrific smell of decomposition. The attraction was not well received and the admission dropped to 25 cents before it went out of business. The whale display went up in flames in August and the smell of formaldehyde and smoldering blubber drove Nathan’s customers away in droves.

An insurance company paid to have the scorched whale towed away and dumped at sea but the stench remained for months after. This was not the first beached whale to be exhibited in Coney Island. Here is a picture of the 1930s "Moby Dick" that was displayed on the Boardwalk.

Parkway Baths
posted on Apr 22nd, 2010
Dear Mr. Coney Island...
When I was growing in a small town near the Pocono Mts. in Pa., all of my summers were spent with my cousins and aunt & uncle who had the Parkway Baths on the boardwalk. Not many of the family left and no body has any pictures of the bath house. The ones I had were lost during the flood of 72 (hurricane agnes). Where can I locate some pictures. I am retired now and spending my golden years in South Florida and often recall all of the wonderful summers with my cousins and my Aunt Irene and Uncle Jack Miner. Please advise. THANK YOU!
- Richard Velevas 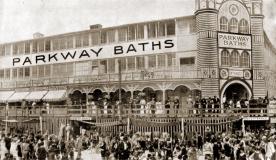 Here are some images to replace what was lost in the hurricane!

Shoot-A-Photo
posted on Apr 8th, 2010
Dear Mr. Coney Island...
My mother showed me a picture of she and my dad and my aunt and cousins in Coney Island in 1948/49. My Dad is shooting a gun in the picture, and the rest of them are looking on with priceless expressions. I was told that it was some sort of an arcade game that if you hit the bulls eye the camera would then take your picture. Can you tell me the name of the game or where it might have been located in Coney Island?
- Vicki 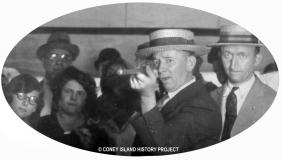 The photo shooting gallery game was called "Shoot-A-Photo," and there were several locations in Coney Island. The most popular was a storefront in the Washington Baths building on the Boardwalk at West 21st Street. Attached is one of their photographs.

Pizza on the Boardwalk
posted on Mar 3rd, 2010
Dear Mr. Coney Island...
My aunt Anna owned the pizza place on the boardwalk right next to the bungalow's at 32nd Street. She sold the place sometime in the 90's when she was in her late 90's herself . I wanted to get as much info asIi could or even some old pics of the place. The family moved to NJ and I can't find them... I spent a lot of time there when I was younger.
- Chuck Randazo 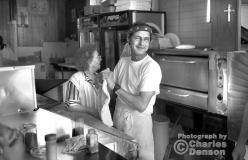 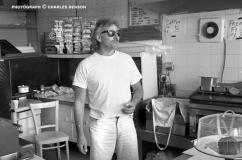 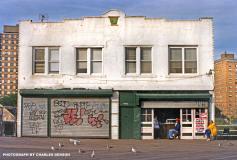 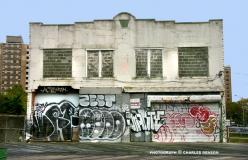 Larry and Vinny's was an Icon to anyone who grew up in the West End of Coney Island during the 1950s-1960s. Here are some photos of Larry and Vinny's shortly before Anna retired at the age of 94. She operated the restaurant for 50 years and it was the last of the West End boardwalk establishments. Pictured are Anna and Robert (dough in hands); Andy "(The Bat") Adams striking a pose, Anna with her incredible pizza; The last days of the store in 1994, and again, shortly before the abandoned building burned to the ground in 2005.

Anna died in New Jersey at the age of 101. She is missed.

Junior High School
posted on Feb 19th, 2010
Dear Mr. Coney Island...
I was wondering, could you tell me where a 12-year-old girl would have gone to Junior High School if she lived on West 21st Street between Mermaid Ave. and Neptune Ave. in 1925? Where could I find information about school life in Coney Island during the 1920s? Thank you!
- Hunter O'Rourke

She probably would have attended PS 80 on West 17th Street or PS 188 on Neptune Avenue near Sea Gate. There was no Junior High in the 1920s.