Family Hotel
posted on Dec 28th, 2007
Dear Mr. Coney Island...
My grandparents, Adam and Caroline Trueson, had a restaurant in Coney Island on Surf Avenue around 1900. Several people in my family have a photo of it, which my late Father gave them. I'm trying to place it. One family member placed it near the entrance to Luna Park Recently, another relative told me it was across from Steeplechase because she remembers the horses. I'm told my grandfather owned several properties in Coney Island. I have two addresses from forclosure announcements from the NYT archive. (He lost them in the 30s.) My photo isn't great. It says, Lackawanna Hotel on it. I don't know the name of the restaurant (it may have been a bar or a beer garden, etc.) It may have been Caroline's or Trueson's but I can't be sure.
- Barbara Trueson 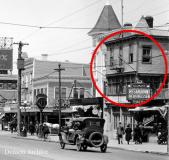 Your grandparents' restaurant was located on the north side of Surf Avenue between 15th and 16th Street directly opposite Steeplechase Park. It is circled in the photo I've provided. If you compare this 1920s image to the one you have from the 1890s you'll see that it's the same building, slightly altered on the ground level. Hope this helps.

Brighton Beach Airport
posted on Dec 27th, 2007
Dear Mr. Coney Island...
I'm researching the visit of the anglo-french pioneer aviator Henri Farman to Coney Island in July/August 1908, when he gave a few public demonstration flights at Brighton Beach race track. It was the first flight New Yorkers had ever seen, and was written up extensively in the NY Times and Sceintific American. Few photographs seem to have survived though. Would you be kind enough to give me any advice as to where might be a good place to start looking? Does the event figure in your own archives?
- Reg W. 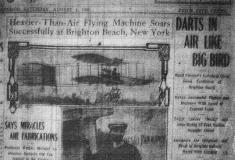 According to this story in the San Francisco Call, Farman made a flight in his "heavier-than-air flying machine" on July 31, 1908. This is the only photograph I've ever seen.

Gyro Ride
posted on Dec 27th, 2007
Dear Mr. Coney Island...
One of the old videos on the archive.org shows a ride which is quite similar to the Harry Hargreave's Niagara Barrel ride on the west coast... but with a different seating, no glasswork and a high speed spin, the name Gyro is shown. What can you tell me on the history and mechanism of this particular ride?
- Tony G.

The Gyro Globe operated on West 12th Street near the Wonder Wheel for two decades, closing in the early 60s. The Kyrimes family operated the Gyro, as well as the adjacent Virginia Reel and Hurricane rides.

The Gyro had a simple circular bench seat in a globe that revolved within an armature, turning and tilting in all directions. A real nausea-inducer!

Astroland Skyride
posted on Dec 18th, 2007
Dear Mr. Coney Island...
I was 6 years in 1968 and I remember this ride - it's a bit difficult to describe, but I will do my best. The outside was like color ball and it was on a skyline writer. You entered, you sat down, and it traversed part of Coney Island. The exterior was round and it would accommodate 4-6 people. It looked very futuristic, like something out of The Jetsons. I remember this very vividly (so does my sister, who 4 years old at the time). Eventually, this ride or tram was torn down because of an accident. This MIGHT have been in the early 1970s. My husband and my brother-in-law believe I am imagining this, but I KNOW that this existed. Any information you can provide would be greatly appreciated. Thank you, Mr. Coney Island and I hope you have a very nice holiday season.
- Viola 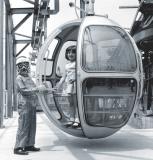 You are most likely describing the Astroland Skyride which opened in 1964 and ran from Surf Avenue to the Boardwalk.

The ride closed in the mid-seventies, but not because of an accident. It just wasn't exciting enough for most thrill-riders.

Beach Chairs
posted on Nov 24th, 2007
Dear Mr. Coney Island...
I have two old Coney Island beach chairs "wood & canvas" the canvas on the top canopy is marked M&C. They were rented on the beach with similar marked umbrellas from concessions run by the parks department. Could you give me some info on them... when and where manufactured, how old, what do initials stand for and when when they discontinued? I have seen them in photos on the beach from the 50's.
- Paul M. 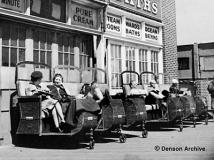 M. & C. was owned by Bob Myers who had his headquarters on West 12th Street underneath Ward's Kiddie Park. Myers operated a concession, granted by the Parks Department, that rented beach chairs, umbrellas, and the rolling chairs on the Boardwalk. The business operated in Coney from the 1930s through the 1970s at various locations under the boardwalk, from Sea Gate to Manhattan Beach.

Every spring, Myers would load up his 1932 Ford truck with his beach equipment and distribute it to the under-the-Boardwalk tin shacks where it was rented to the beach-going public during the summer. The rolling chairs could also be rented in the winter. They were stationary and lined up in front of the Ward's building, occupied by sun-worshipers who used them year-round.

You have a valuable piece of Coney Island history!

Lots of Questions from Dennis Sulam
posted on Nov 24th, 2007
Dear Mr. Coney Island...
When was PS 80 demolished? and what is on that site? What happened to the Carvel stand near Washington Baths? Is the Carolina Italian restaurant still in business? What happened to the Aaron Bring Chevrolet dealership on Neptune Ave.? Many of the small business shops on Mermaid Ave. have been demolished. What replaced these commercial entities?
- Dennis Sulam 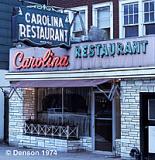 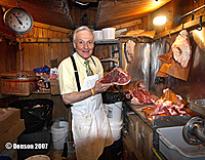 Both P.S. 80 buildings were demolished around 1980 and were replaced with two-story attached homes built by Astella Development of Mermaid Avenue.

Carvel operated first on Surf Avenue at West 21st Street through the 1960s, and then moved east to Stillwell Avenue and then to Surf Avenue in the Popper Building before closing several years ago.

Carolina was in business through the 1980s before being sold to a new owner who ran it into the ground. A chinese buffet now operates in the old building. The family that ran Carolina now operates the popular Fiorentino Restaurant on Avenue U at McDonald Avenue.

The Chevy dealership closed years ago. Their warehouse near Surf Avenue survived until the 1980s and then was demolished.

Most of the small businesses on Mermaid were replaced by Astella housing with retail on the ground floor. Only a few shops remain from the old days, the most famous is the butcher shop Major Meats at West 15th Street. Jimmy Prince has been at Major's since 1949 and has transformed the store's windows into a Coney Island exhibit.

Coney Creek Barn
posted on Nov 6th, 2007
Dear Mr. Coney Island...
I grew up on 12th & Neptune and recall a barn or something similar near Coney Creek. I believe the Sanitation Department used it. Might you know of pictures, or any other proof?
- AB Gold 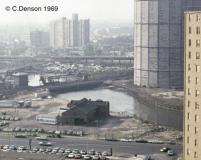 The barn was built in the late 1890s and served multiple purposes over the years: First as a Fire Department Pumping station and later a Sanitation Department salt storage facility. It was demolished about 30 years ago. 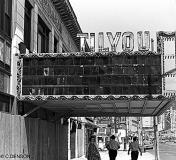 The Coney theaters were: The RKO Tilyou, operated by the Tilyou family of Steeplechase Park on Surf at West 17th (demolished 1973); The Loews theater on Surf at Stillwell (which is closed but still exists as the Shore Theater); The Surf Theater at Surf and West 32nd (closed in 1958); The Mermaid Theater at Mermaid Avenue and West 29th. (closed 1963); The Tuxedo Theater, Ocean Parkway at Brighton Beach Avenue (closed 1964). The Gate Theater, Surf at 25th Street (closed c. 1940s)

Boardwalk Baths
posted on Jun 29th, 2007
Dear Mr. Coney Island...
I have seen many pictures of "baths" in and around the boardwalk. What exactly are they? What made them so popular?
- Coney Fan

The bathhouses were where people rented lockers and changed from street clothes to swim suits. You could also rent swimsuits and beach chairs and umbrellas. Before the boardwalk was built the beach was private and the only way to get to the ocean was to pay admission at a bathhouse. Some of the bathhouses had recreational equipment, handball courts, restaurants, and huge salt water swimming pools. Everyone had a favorite.

They were very social places and generations of families and friends from the same neighborhoods patronized the same bathhouses for years until the last one (Brighton Beach Baths) was demolished in the early 1990s. 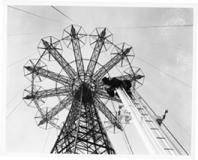 The Parachute Jump never operated after the closure of Steeplechase Park on September 19, 1964. The information in the New York City Landmarks Preservation Commission Designation Report, claiming that the Jump operated until 1968, is inaccurate and is based on a newspaper article that the commission's researcher read about an accident at the site. The accident did not take place on the Parachute Jump. It occurred at a small go-kart track that circled the base of the abandoned Parachute Jump until 1971.

What's particularly amusing about the researcher's mistake is the media's embellishment of the years that the Parachute Jump supposedly operated after Steeplechase closed. Dramatic news stories have been spun about a declining Jump falling into disrepair, including detailed descriptions of the rickety ride finally being forced to close in 1968.

The commission's report also lists Norman Kaufman as the Parachute Jump's last operator. Kaufman, who operated an amusement fairground and parking lot on the Steeplechase site after the park was demolished, has always found this curious. "No, I never operated the Parachute," he said in 2003 when asked about the flawed report. "The historical consultant wrote that. She got it all wrong. The Garto brothers had a go-kart ride around the Parachute. I had nothing to do with that. I had nothing to do with the Boardwalk. The Garto brothers rented the base from Fred Trump and ran a go-kart ride."

Why is this information relevant? With restoration of the ride being proposed, it's important to get the facts straight. The Parachute Jump was an incredibly difficult ride to maintain and operate, and it had a perfect safety record. The commission's false image of the ride operating for several years with a ragtag crew implies that it could easily be restored and operated in its original form without much effort.

Although it's possible that the Parachute Jump could operate again, the ride's landmark designation would require it to be restored to its original form: a free fall with real chutes. The cost of restoration might prove to be prohibitively expensive, as the ride would require a highly trained and experienced crew to maintain it in the manner that the Tilyou family did until its closure in 1964. Besides the obvious insurance and liability concerns is another factor to consider: the Parachute Jump never made money for the Tilyous. Part of the reason can be traced to its location. Stiff ocean breezes kept it closed much of the time. Until these problems can be resolved, the landmarked Parachute Jump will continue in its role as a symbol of Coney Island survival and resurrection.