New on Charles Denson's Coneyologist channel on YouTube: "Immigrant Heritage and Coney Island" brings together archival and contemporary photos of immigrants, including images of Coney Island Creek, where immigrants come to fish and pray. This is a diverse, multicultural and spiritual envrionment. Unfortunately, the City's planned ferry dock will soon destroy this refuge on Coney Island Creek that provides peace and subsistence for the surrounding community.

These robotic chipmunks once sang their songs at the Bowery entrance to Spook-a-Rama. A 1980s fire on Jones Walk forced the closure of that section of the ride and the chipmunks were removed and placed in storage. In 2016, Steve Vourderis decided to bring them back to life for the annual History Day event sponsored by the Deno's Wonder Wheel Park and the Coney Island History Project. A film by Charles Denson.

posted Jul 16th, 2020 in Video Posts and tagged with
Add a commentPermalink

Memories of Coney Island's Mermaid Avenue in the 1950s

New on our YouTube channel: Charles Denson's Mermaid Avenue in the 1950's brings together photos from the Coney Island History Project Collection and the voices of Michael "Looch" Goldstein and Stanley Fox. They grew up at opposite ends of Mermaid Avenue and recorded their memories of the Avenue in the 1950s for the Coney Island History Project Oral History Archive. Goldstein and Fox operated businesses in Coney Island's amusement area for over 60 years.

Listen to their stories and those of Jimmy Prince of Major Meats and Steven Feinstein of Wilensky Hardware,  whose Mermaid Avenue businesses survived  into the 21st century.  Major Meats closed when Jimmy retired in 2009.  Wilensky Hardware is celebrating its 100th anniversary in 2020.   You're invited to share your Coney Island memories at coneyislandhistory.org/oral-history-archive.

Happy 100th Birthday, Deno's Wonder Wheel from the Coney Island History Project! Join Charles Denson in this video sing-a-long of a 1920's song celebrating the joys of the Wonder Wheel to the tune of The Sidewalks of NY.  He discovered the song while researching Coney Island's Wonder Wheel Park and the lyrics are in the soon-to-be published book. We had planned to invite everyone to sing it at the now to be rescheduled Memorial Day Weekend Celebration.

posted May 23rd, 2020 in News and tagged with
Add a commentPermalink

The Cleon Collection: Building the Boardwalk, 1922

Charles Denson, director of the Coney Island History Project spoke of the historic role that Coney Island has played in welcoming immigrants: “When immigrants sailed into New York Harbor at the turn of the last century, the first thing they saw wasn’t the Statue of Liberty; it was the towers and bright lights of Coney Island,” Denson said.

posted Jul 1st, 2019 in Video Posts and tagged with
Add a commentPermalink

Coney Island Creek is the last remnant of a vast and vibrant salt marsh estuary that once covered nearly 3,000 acres between the sand dunes of Coney Island and the glacial plain of what is now Southern Brooklyn. The waterway became Coney Island’s earliest attraction as the island’s first hotels sprang up along the creek’s shoreline during the 1820s. Until the late 19th century, pristine Coney Island Creek remained a popular destination for boating, fishing, crabbing, and hunting waterfowl.

The sprawling resorts that opened along the oceanfront in the 1870s began using the creek to dispose of raw sewage, initiating of a pattern of abuse that continued for the next century. As Coney Island developed and grew into the “World’s Playground,” the surrounding marshes were filled in with garbage and ash, polluting the creek and transforming it into a two-mile long industrial waterway that still drains Southern Brooklyn through numerous storm sewer systems. For several decades, the neglected and toxic creek survived misguided attempts to destroy it by filling it in rather than restoring it.

The Clean Water Act of 1972 and a new ecological awareness changed public perception and gave new life to Coney’s neglected waterway. The 100,000 residents who live in close proximity to Coney Island Creek are coming to realize that the creek can be an asset instead of a liability. It’s now a case for Environmental Justice.  Today the creek has four parks along its shoreline and is once again being used for recreation, fishing, and boating. But much work remains to be done in restoring and protecting this dynamic ecosystem.

The mysterious Childs Restaurant Building, with its nautical-themed terra cotta decorations, has fascinated Coney Island visitors for years. Charles Denson's film illustrates the structure's history and future. The Boardwalk landmark will reopen in summer 2016 as the Coney Island Amphitheater.

How to Pack a Cyclops!

The Spook-A-Rama Cyclops has proven to be the most popular piece in the Coney Island: Visions of an American Dreamland show at the Brooklyn Museum. Endless photographs and comments about "Cy" have been posted online by art-lovers and Coney-lovers who've visited the show. When we loaned the Cyclops we hoped that people would realize that it was part of an operating amusement at Deno's Wonder Wheel Park. It's the only object in the Coney Island show that is actually from a currently operating amusement, although the signage at the show fails to mention that fact. Spook-A-Rama was completely rebuilt and restored after being seriously damaged by Hurricane Sandy and opens for the season on March 20.

The Cyclops is an extremely fragile work of art that had to be carefully and skillfully packed for the four-city tour of the Coney Island show. The best art packers did an excellent job. It took nearly an entire day for the Artex craftsmen to build the massive crate for its road trip. After the Brooklyn Museum show closes on March 13th, the Cyclops travels to San Antonio, Texas where the tour ends in September. We look forward to our Cyclops centerpiece returning to the Coney Island History Project and Wonder Wheel Park in 2017! 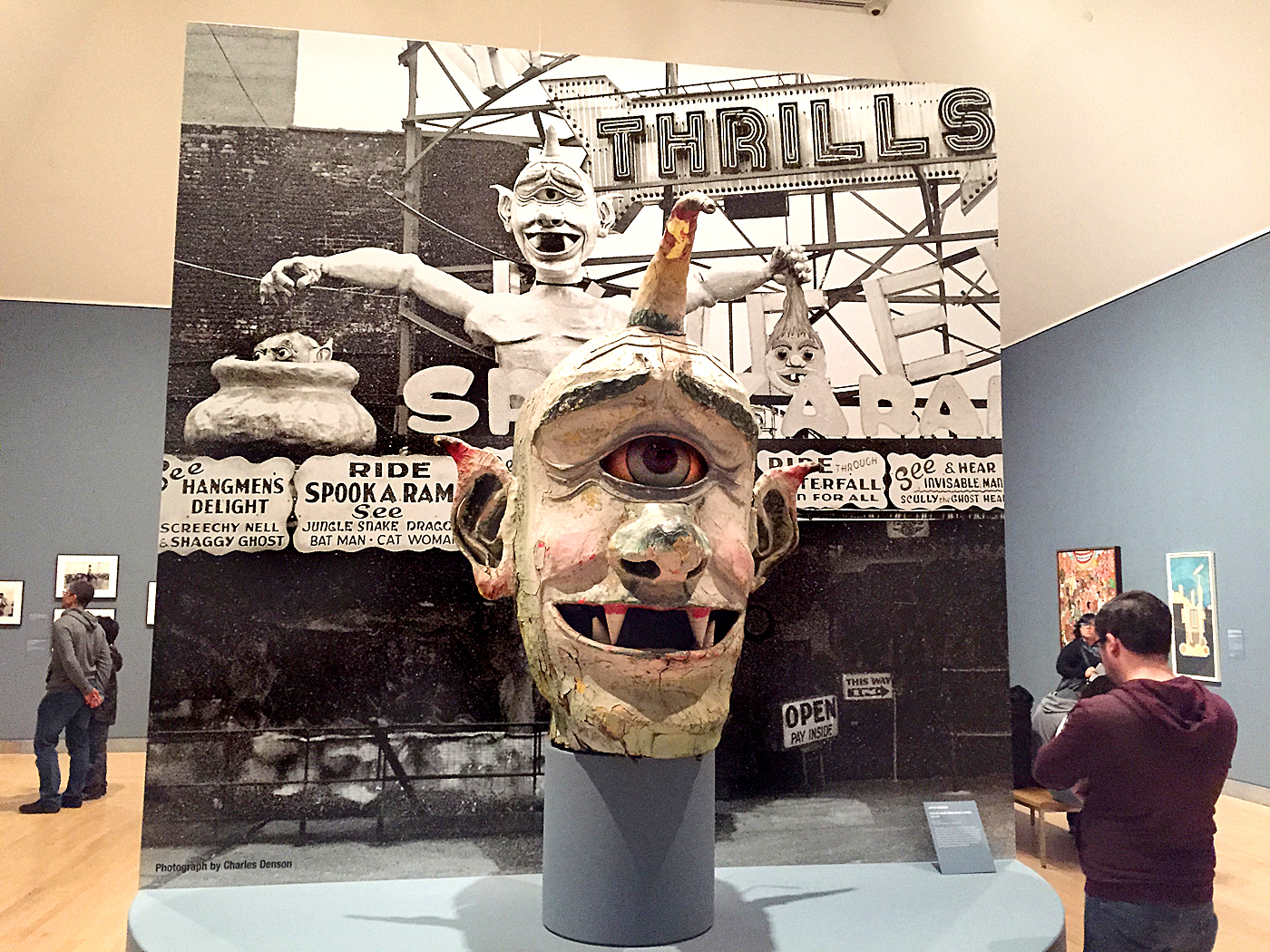 The Cyclops in front of Charles Denson's 1970s Spook-A-Rama photograph at the Brooklyn Museum.

posted Feb 18th, 2016 in By Charles Denson and tagged with
Add a commentPermalink

NEW in the Coney Island History Project #OralHistory Archive: Ansen Tang, ED of the United Chinese Association of B… https://t.co/c9Z6o7HM5T
6 days 9 hours ago