About the Coney Island History Project

You're invited to visit the Coney Island History Project's exhibition center on Coney's traditional opening day, Palm Sunday, April 10, and on Easter Sunday, April 17. We'll be open special hours--1:00PM-6:00PM. Admission is free of charge. View historic artifacts, photographs, maps, ephemera and films of Coney Island's colorful past as well as banners previewing our special exhibitions for the 2022 season. Our exhibition center season begins Saturday, May 28. We’ll be open 1:00PM-7:00PM, weekends and holidays, from Memorial Day Weekend through Labor Day. This year marks the 18th anniversary of the Coney Island History Project and our 12th season at Deno's Wonder Wheel Park. Since our inception in 2004 with a portable booth on the Boardwalk for recording oral history interviews, we have proudly offered "Free Admission for One and All!" at our exhibits and special events. Our history banners will also be on display starting April 10 at Deno’s Wonder Wheel in the plaza below the Phoenix Roller Coaster.

The Coney Island History Project, founded in 2004, is a 501(c)(3) not-for-profit organization that aims to increase awareness of Coney Island's legendary and colorful past and to encourage appreciation of the Coney Island neighborhood of today. Our mission is to record, archive and share oral history interviews; provide access to historical artifacts and documentary material through educational exhibits, events and a website; and honor community leaders and amusement pioneers through our Coney Island Hall of Fame. Emphasizing community involvement, the History Project teaches young people about local history and develops programs in conjunction with local schools, museums, senior centers, and other organizations.

The History Project's public programs began in 2005 with the opening of the Coney Island Hall of Fame, an exhibit that honors influential figures in history, and Coney Island Voices, an oral history archive that preserves the stories and memories of people who visited or lived and worked in Brooklyn's famous playground. In 2006 we presented Coney Island Dreamers, an exhibit of banners from the Coney Island Hall of Fame and documentary photographs of Coney Island at the Brooklyn Public Library at Grand Army Plaza. We also continued our local history learning programs with students at Mark Twain Junior High School, the Global Studies School and Brooklyn College.

In 2007, we presented slide talks at the American Museum of Folk Art and Brooklyn College, and inaugurated our public exhibition center under the Cyclone roller coaster in Coney Island. “Land Grab: A History of Coney Island Development,” “Woody Guthrie’s Coney Island Years,” “The Astroland Archives Photography Exhibit,” “Coney Island Icons,” and “Luna Park Revisited” were among the exhibits at the Coney Island History Project's exhibition center during its first four years.

In 2011, the Coney Island History Project moved to our current home on West 12th Street beside the Wonder Wheel at the invitation of the Vourderis family, owners of Deno’s Wonder Wheel Park. Featured exhibits at the new space have included “The Dreamland Fire Centennial,” “Coney Island Bathhouses: A Lost Culture,” and the first solo show by local photographer Abe Feinstein, who has been documenting his neighborhood for more than 50 years. 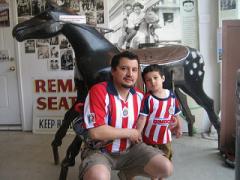 2013 saw our recovery from Hurricane Sandy and the opening of the exhibits “The Curious Playland Arcade Art of Larry Millard” and "Wonder Wheel Dreams." We were invited to work with sixty students at PS 226 and an after-school program at PS 16 for which we produced a film based on their artwork and poetry. In August of 2013, the 3rd Annual History Day presented by Deno’s Wonder Wheel Park and the Coney Island History Project was the inaugural event at the new Dreamland Plaza on West 12th Street.

Visit our online Oral History Archive to listen to over 400 oral history interviews with people who grew up, live or work in Coney Island and adjacent neighborhoods in Southern Brooklyn, or have a special connection to these places. Schedule an appointment to share and preserve your memories by recording an interview via phone or Zoom. We are recording interviews both in English and other languages, including Chinese, Russian, and Spanish. In 2021, we launched Coney Island Stories, our podcast produced from oral histories in our archive. Listen via your podcast app or the podcast page on our website.

The Coney Island History Project was founded in 2004 by Carol Hill Albert and Jerome Albert in honor of Dewey Albert, creator of Astroland Park. Executive director Charles Denson is a Coney Island native, a noted historian, and the author of the award-winning book Coney Island: Lost and Found.   The History Project is supported, in part, by the New York City Department of Cultural Affairs in partnership with the New York City Council; Humanities New York with funding from the National Endowment for the Humanities via the federal American Rescue Plan Act; the Museum Association of New York; the New York State Council on the Arts; and our members and contributors.