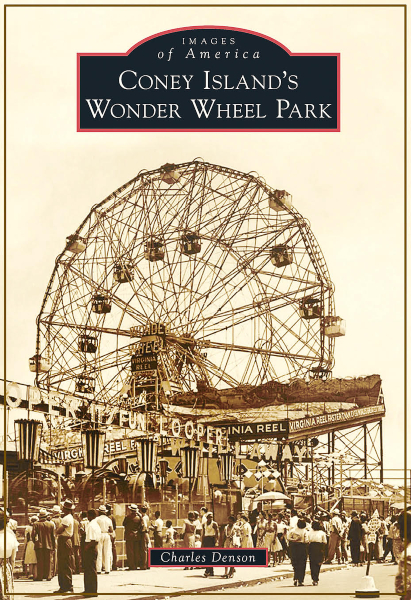 We're thrilled to announce the upcoming publication of Charles Denson's book Coney Island's Wonder Wheel Park on August 3 (postponed from May 18).  This year the landmark Wonder Wheel celebrates its 100th birthday, and to mark the occasion the Coney Island History Project director and author of Coney Island: Lost and Found has written a new book to coincide with this historic event. While researching the fascinating history of the Wonder Wheel he was surprised to discover so much that was lost to history about the Wheel and its origins. "It was a joy to write," Denson said, "the Vourderis family, owners of Deno's Wonder Wheel Park, truly represent the essence of Coney Island and are incredible to work with."

Coney Island's Wonder Wheel Park is all primary source research, gleaned from numerous interviews with surviving members of all of the families involved in the design, construction, and operation of this venerable ride, from original concept in 1914, construction in 1920, and salvation by the Vourderis family who purchased and restored the ride in 1983.

The theme of the book is immigrant initiative. Charles Hermann, the Wonder Wheel's designer was Romanian; original owner Herman Garms was German; and Denos Vourderis, who bought the ride in 1983, was Greek. The construction crew was made up of Italian, Irish, and Russian immigrants, who were given stock in the Wheel and made part owners. The book tells the story of a former eel fisherman and cheese maker teaming up with a machinist/building superintendent to finance and build a fantastic ride based on Leonardo da Vinci's 15th century sketch of a perpetual motion machine. The Wonder Wheel is now Coney Island's oldest continuously operating ride; a survivor of urban renewal, hurricanes, and fires; and an official New York City landmark. It has a perfect safety record.

Published by Arcadia's Images of America series, Coney Island's Wonder Wheel Park contains hundreds of never-before-seen photographs, plans, and ephemera, including rare images from the Vourderis family archive and the Coney Island History Project archive, and interviews with the family of the original designer and builder of the Wonder Wheel. The Coney Island History Project exhibition center had scheduled an accompanying Wonder Wheel exhibit curated by Charles Denson to open Memorial Day Weekend.  The exhibition center remains closed due to state executive order and our opening date has yet to be determined.

This blog post was updated on May 19, 2020 with information about the rescheduled book publication and postponement of the exhibition.

My father was a renowned photographer for the World Telegram and took numerous publicity photos at Coney Island from the late 50's to the mid 60's working with Milton Berger. He was there every weekend during the season, my sister and I were also there on many of those weekends...Coney has always had a big place in my heart.
I remember meeting Fred Garms on one of our trips, he took my sister and I on a tour of his attractions, the Wonder Wheel, a spook house and a carnival game where he hoisted us over the counter for a better chance of winning and then awarded us the biggest prizes offered. I remember threatening my parents on numerous occasions that I was going to run away and work for Freddy at the Wonder Wheel - such great memories!

NEW in the Coney Island History Project #OralHistory Archive: Ansen Tang, ED of the United Chinese Association of B… https://t.co/c9Z6o7HM5T
10 hours 47 min ago