After closing his Mermaid Avenue market in 2009, Jimmy Prince, now 82, remains active and was profiled in New York Magazine’s “My Day.” In the summer, he volunteers at the Coney Island History Project exhibit center, where his longtime customers are delighted to see him again.

“Prince of Mermaid Avenue,” a film about Jimmy Prince by History Project Executive Director Charles Denson, is now available for viewing on his Coneyologist channel on YouTube. The film won Best Documentary at the 2009 Coney Island Film Festival. This 60-minute feature is based on more than 60 hours of raw footage shot over a three-year period.

Jimmy Prince was the last link to what Mermaid Avenue meant to Coney Island in the “good old days.” The Avenue was once a bustling street of family-run mom-and-pop stores. Each block had bakeries, luncheonettes, five-and-dimes, clothing and shoe stores, furniture stores, delis, and butchers. It was a tight-knit community.

The city’s urban renewal plan of the 1960s called for the demolition of the entire West End, including Mermaid Avenue, and few businesses survived the development onslaught. Jimmy Prince transformed his Major Meat Market into the soul of an earlier era, a cordial oasis of tradition and hope, a throwback to what Coney Island was and what many dreamed it could be again one day. Prince worked at Major’s for sixty years, seven days a week, twelve hours a day, and formed a unique relationship with a community that hungered for respect.

When he finally faced retirement,the decsion to close the store dragged on for over a year. He dreaded making a formal announcement about the store’s closing, but his friends could sense it was coming. His loyal customers expressed their love for him and their fear for a future without him. This film documents Jimmy’s decision to retire and the painful process of leaving the Coney Island community that he loved and supported for so many years. 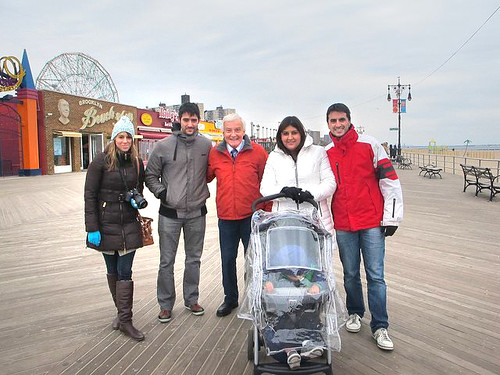 Jimmy Prince poses for photo with visitors from Spain on a recent Coney Island History Project Walking Tour. The Prince of Mermaid Avenue, who had just come from a walk to and from Sea Gate and a bite to eat at Tom's, stopped to regale the group with Coney Island stories

"Coney Island Creek: An Uncertain Future," a film by Charles Denson, was recently screened at Coney Island Library and is now up on Denson's Coneyologist channel on YouTube. Featuring interviews with stakeholders including local residents, ecologists, anglers, birders, divers, park volunteers, teachers, and the Brooklyn Parks Commissioner. The 18 minute video is part of a longer documentary film project currently underway.

"I grew up near Coney Island Creek and began photographing it in the 60's when the waterway was at its lowest point, polluted and neglected, but I always knew there was something special about the creek and that it would survive," Denson says in the film's introduction. Today, the future of Coney Island Creek is uncertain. Will it be an asset or a liability? The city is currently funding a feasibility study to decide whether to dam up the creek by building a tidal barrier with culverts, a move that would most likely turn the waterway into a toxic cesspool and do little to prevent flooding. Will Coney Island Creek become a restored wetland that prevents flooding or will it become a hazard to the community? Informed community input is vital. 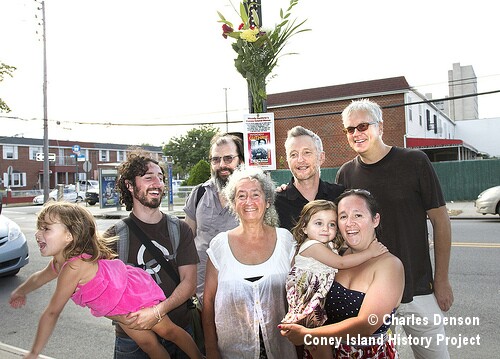 Happy 102nd Birthday, Woody Guthrie! This weekend, in honor of the folk hero's July 14th birthday, the Coney Island History Project will screen "Woody Guthrie's 100th Birthday, Celebrated at Coney Island," a short film by Charles Denson. The film may be viewed on Saturday and Sunday, July 12th and 13th, from 12pm -6pm, at the History Project's exhibit center. Admission is free of charge.

Charles Denson's film was made on July 14, 2012, when the activist songwriter's daughter Nora Guthrie and family members including grandchildren, along with musicians Billy Bragg and Steve Earle and actor Tim Robbins (seen in above photo) made a pilgrimage to Coney Island, where Guthrie lived on Mermaid Avenue for a decade.

The film will be screened next year at the Brooklyn Center for the Performing Arts at Brooklyn College when the Klezmatics' "Woody Guthrie's Wonder Wheel Tour" performs there on March 8, 2015. This week, the arts center is commemorating Guthrie's birthday with a special discount offer for the Klezmatics' show, which features songs written during Guthrie's Coney Island years such as "Mermaid's Avenue." Use code WOODY20 and save $10 per ticket. The offer expires on Woody's birthday.

In 2008, Woody Guthrie was honored at the Coney Island Hall of Fame ceremony at the Coney Island History Project along with an exhibit "Woody Guthrie's Coney Island Years." History Project director Charles Denson also put up the commemorative plaque, seen in the photo above, at 3520 Mermaid Avenue, where the Guthries lived from 1943 to 1952. The building was demolished in 1972. When Guthrie died in 1967, his ashes were spread in the ocean one block from here, at the foot of West 36th Street. In 1928, when John F. Kennedy was a young boy living with his family in the Bronx (the Riverdale section, not the South Bronx), his father, Joe, was forming RKO studios and producing a movie called "Coney Island. " The flick starred silent picture queen Lois Wilson and was directed by Ralph Ince. The motion picture industry had recently moved from Brooklyn (Vitagraph Studios in Midwood) to Hollywood and most of the Coney scenes were shot in Los Angeles. Promotion for the film described it as the story of " a young woman swept up in the romantic magic of America's favorite fun destination. . . "

Joseph P. Kennedy sold his movie studios in the early 1930s, went into the liquor business, and then into politics as President Roosevelt's ambassador to Great Britain. The rest is history. 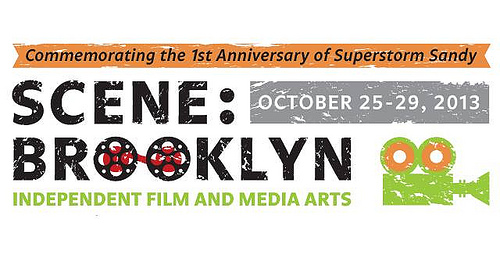 Remember the dunes that were created by the US Army Corps of Engineers on West 15th Street after Sandy? "Coney Island Dune: Leaving Sandy Behind" by Coney Island History Project director Charles Denson is a lyrical look at the temporary sand dunes. The sand was cleaned and then returned to the beach by the Parks Department after having been collected from the streets where it had been swept by the storm. You can see the film on Denson's Coneyologist channel on YouTube. Also on view are "Requiem for the Astrotower," "Woody Guthrie's 100th Birthday, Celebrated at Coney Island" and "Secrets of the Universe," a short that premiered at the 2010 Coney Island Film Festival.

Stanley Shapiro grew up in Coney Island in the 1940s. In this audio clip he recalls 25-cent excursions to the movie… https://t.co/2kcYoAgaWY
1 day 7 hours ago

RT @LaGuardiaWagner: In honor of #MLKDay
3 days 17 hours ago