Why are failed mayoral candidates so attracted to Coney Island development? “Failed” may not be not be the best description, as two of the former candidates with ongoing projects in the neighborhood may run again. Christine Quinn, John “Cats” Catsimatidis, and Jerome Kretchmer all ran unsuccessful campaigns for New York City mayor and are also very involved in Coney Island development. 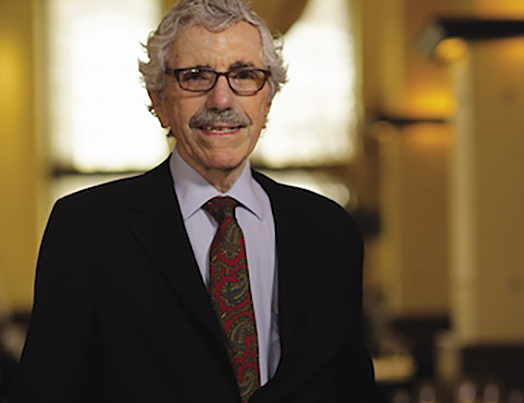 The first unsuccessful mayoral hopeful to land in Coney Island was Jerome “Jerry” Kretchmer, who ran for mayor in 1973. Forty years later, Kretchmer and daughter Andrea, of the Kretchmer Companies, were the lead developers of the 2013 Coney Island Commons project on Surf Avenue at West 29th Street. This affordable housing project was built on vacant city-owned land that was cleared of viable housing in the 1970s as part of the urban renewal program that leveled the West End section of Coney Island. Kretchmer’s colorfully clad Coney Island housing project is also the home of the new Coney Island YMCA. Back in 1969 Former assemblyman Kretchmer was appointed head of NYC Environmental Protection Agency by Mayor John Lindsay and used his position to propose the city’s pooper-scooper law, something that was controversial at the time, but a law that all New Yorkers should be grateful for. 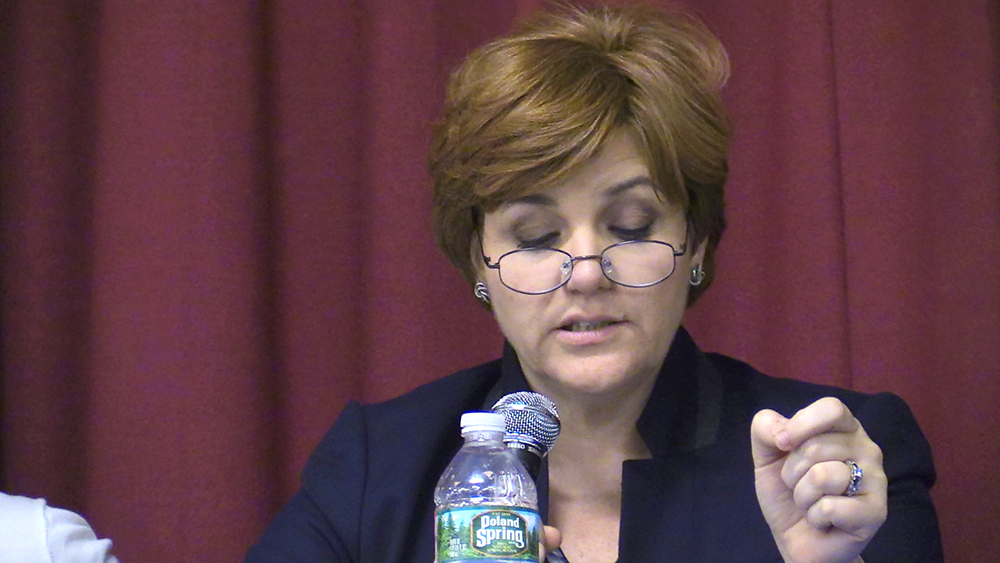 And then there is 2013’s mayoral candidate Christine Quinn, now the president and CEO of the nonprofit organization Women in Need (Win), who is seeking to build a homeless shelter on Neptune Avenue at West 20th Street. Quinn has chosen an industrial site on polluted Coney Island Creek to house homeless women and children. Her organization plans to demolish the former factory building of the Brooklyn Yarn and Dye Company, a facility that for decades poured toxic waste into adjacent Coney Island Creek, the neglected waterway that’s been listed in the past as having the highest coliform levels in the city as well as high levels of lead and arsenic.  In 2009, after the Coney Island rezoning plan was passed, City Council Speaker Quinn proclaimed, “Coney Island is one of the most recognizable icons in New York City. And that’s why we believe this plan will lead to the revitalization of this storied section of our city.” Quinn’s project, although well intentioned and not part of the rezoning, may not be the revitalization that the neighborhood had hoped for back in 2009, and a majority of local residents made their opposition clear in a December 2016 community meeting where the project was roundly criticized. 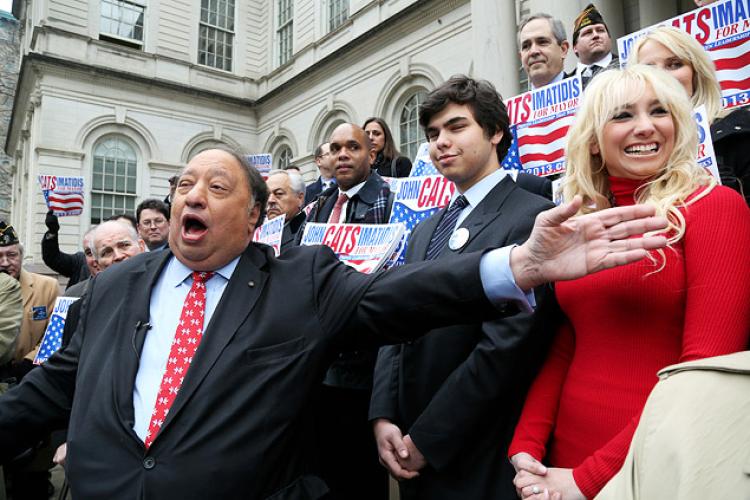 Billionaire mayoral candidate and Gristedes owner John “Cats” Catsimatidis and his Red Apple Group recently began development on two Boardwalk sites he owns in Coney Island’s West End. Cat’s ambitiously outlandish high-rise project dubbed "Ocean Dreams" at West 35th Street at Surf Avenue would make any Miami Beach developer proud. The development promises to bring a supermarket, retail space, and swimming pools to the neighborhood. Catsimatidis explored a mayoral bid in 2009 and later spent millions of his own money on his unsuccessful 2013 campaign only to lose the Republican nomination to Joseph Lhota. 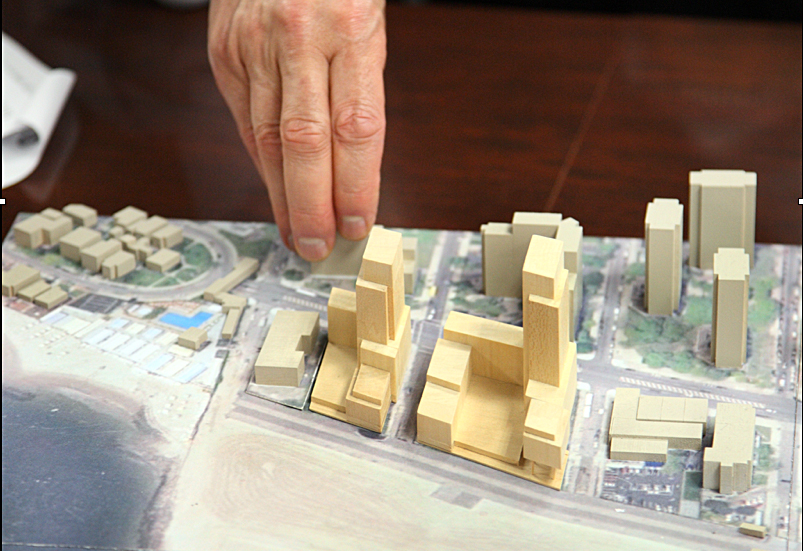 The Catsimatidis site is appropriately ironic, as it is located across the street from O’Dwyer Gardens, a NYCHA housing project named for a failed New York City mayor. Former Brooklyn District Attorney William O’Dwyer ran for mayor in 1941 but lost to Fiorello LaGuardia. In 1945 O’Dwyer went on to become New York’s 100th mayor after LaGuardia decided not to run, and he later won a second term in 1949 only to resign his office eight months later in the midst of a massive scandal.

The scandal, which dated back to O’Dwyer’s years as Brooklyn district attorney, involved allegations connecting the mayor to the mafia and the mysterious death of mobster Abe Reles. Hit man Reles, also known as “Kid Twist,” was tossed from a sixth-floor window of Coney Island’s Half Moon Hotel while under police protection before he could testify at trial against his fellow “Murder Incorporated” gangsters. O’Dwyer’s admitted friendship with mobster Frank Costello led to his 1950 resignation as mayor of New York City. Coincidentally, the Half Moon Hotel, which was demolished in 1994, was located on the Boardwalk, just two blocks from O’Dwyer Gardens. 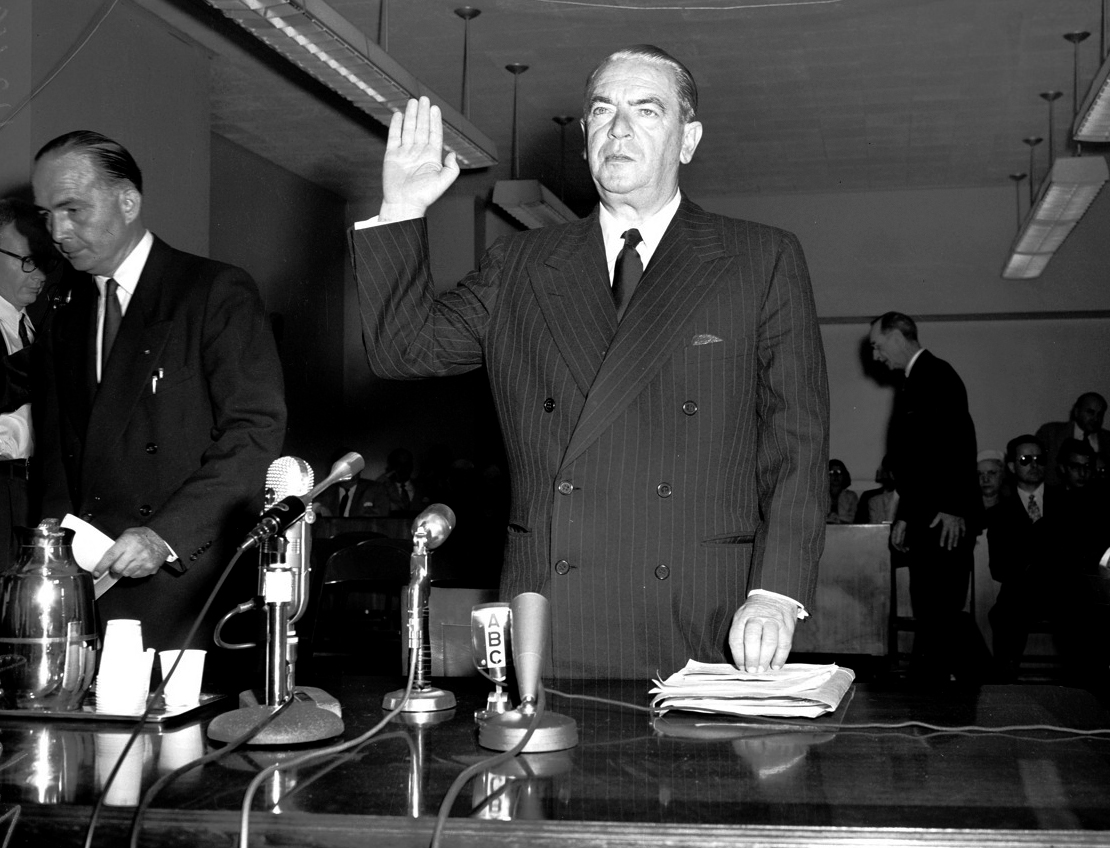 O’Dwyer had another Coney connection. Known as a passive mayor who liked to transfer power to unelected officials, he appointed Parks Commissioner Robert Moses to a newly created post called “New York City Coordinator of Construction.” Moses transformed the appointment into one of the most powerful positions in city government, one that gave him total and complete control over all city projects and funding. Moses would go on to implement ruinous slum clearance projects that destroyed entire neighborhoods, uprooted thousands of families, and left hundreds of blocks of vacant lots after development funding ran out. In 1949 Moses declared the residential West End of Coney Island an urban renewal site and used eminent domain to level the entire neighborhood, leaving a sea of high-rise housing projects surrounded by burning ruins. One of those high-rise projects would be named O’Dwyer Gardens. 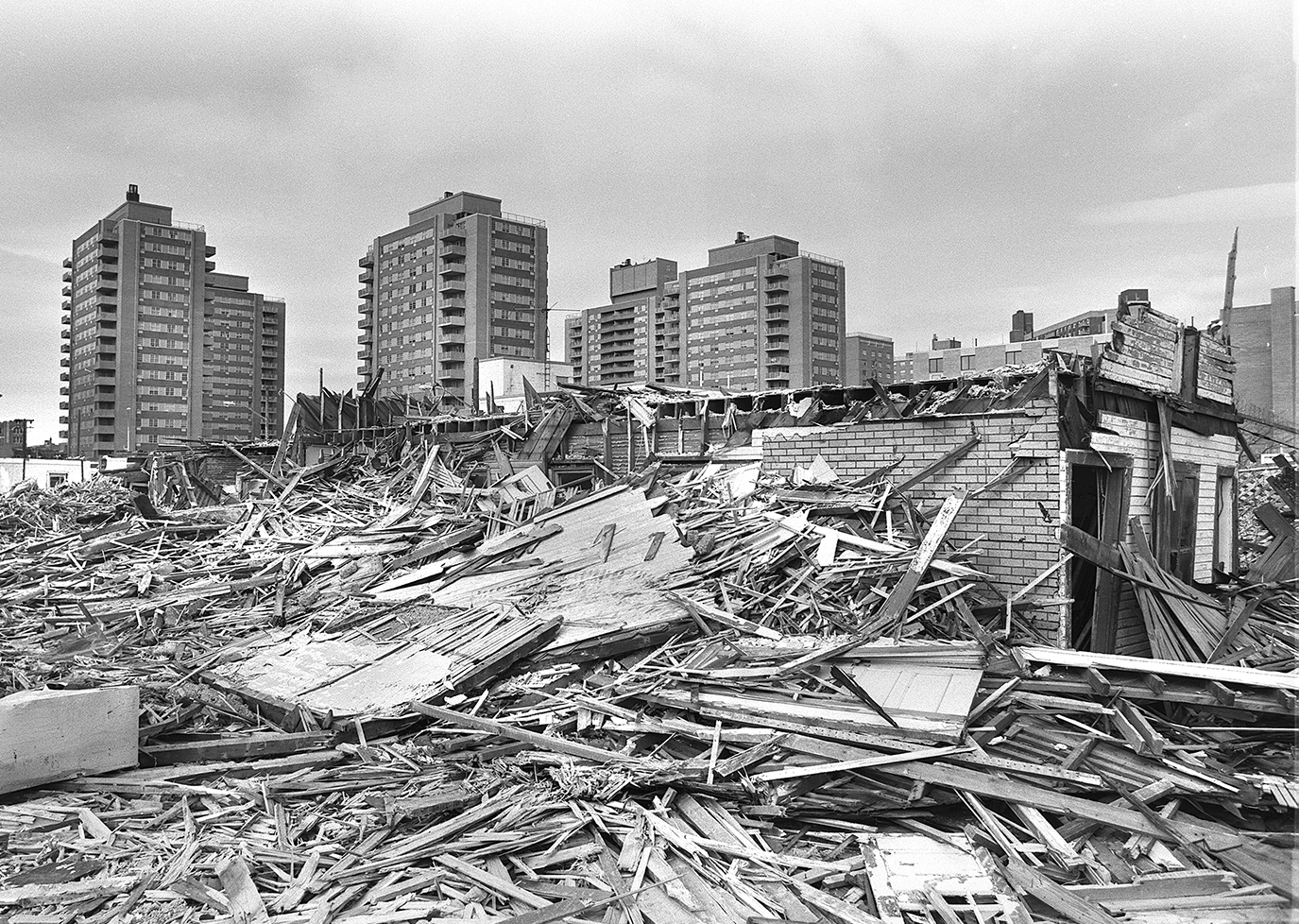 Coney Island spent decades making a shaky recovery from dubious urban planning. Now, after a 40-year hiatus, Coney is once again being flooded with high-rises. Construction has already begun at the vacant sites in the former amusement zone where Ravenhall and Washington baths were once located. It might seem counterintuitive to cram thousands of units of high-rise housing onto a vulnerable sandbar during a time of global warming and predictions of catastrophic sea level rise, but that seems to be Coney Island’s future. 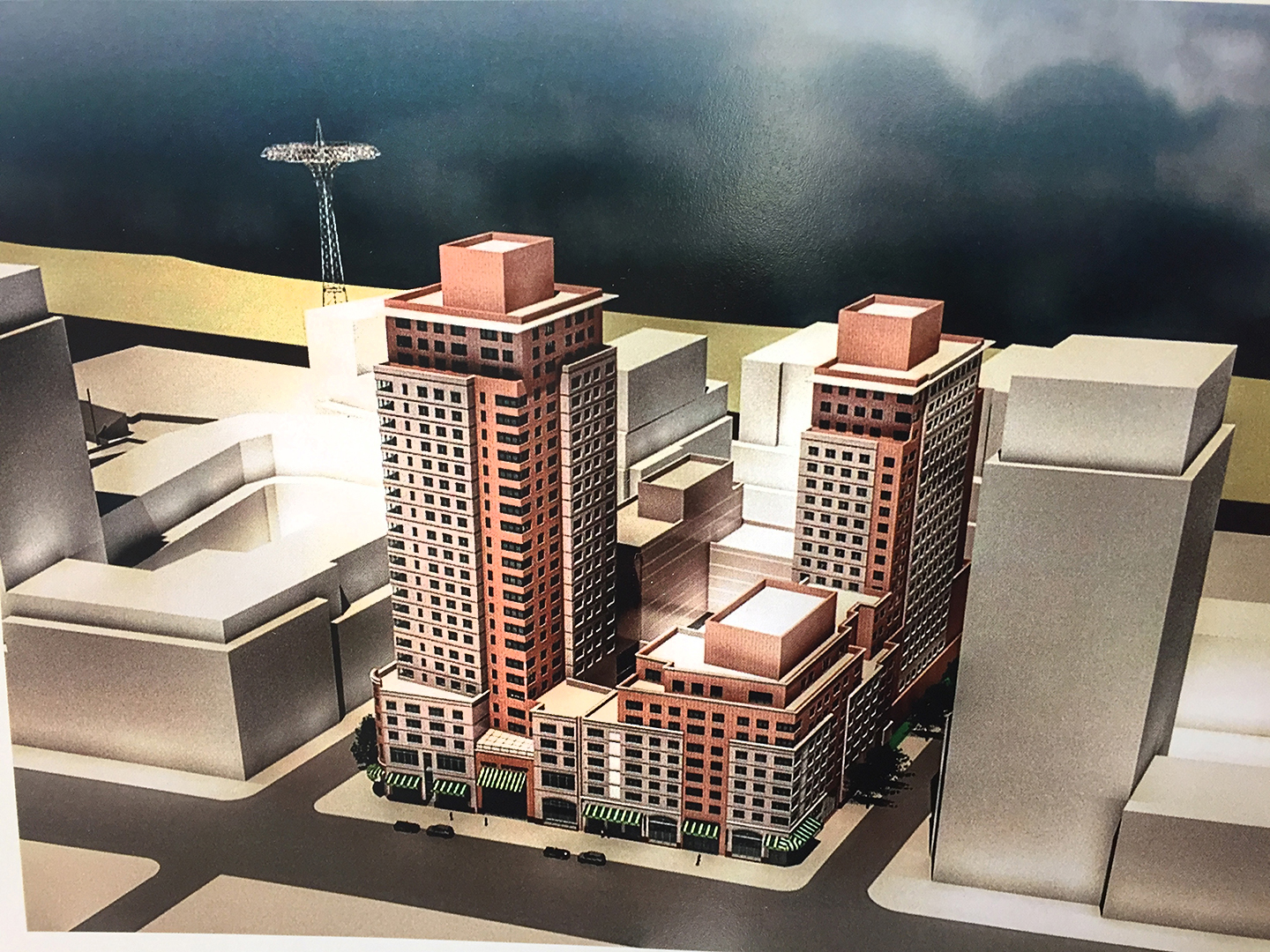 The new Surf Avenue: Surf Vets Place (at center) is now under construction. High-rises (at left) will soon replace the MCU Park parking lot and surround the Parachute Jump. The Abe Stark Skating Rink on the Boardwalk will also be demolished for residential development.

Farther east, at Trump Village, billionaire developer Ruby Schron is demolishing the Trump Shopping Center to build a glitzy 40-story high-rise in its place. Schron must have tower envy, as his building is twice the size of the dismal buildings that developer Fred Trump erected in the early 1960s. Schron’s erection will be twice the size of Fred Trump’s! Future residents will have views of Trump Village rooftops and the Atlantic Ocean but will also have a sweeping view of the sprawling 10-acre multi-district Sanitation Department garbage truck facility being planned a block away on Coney Island Creek at Shell Road. 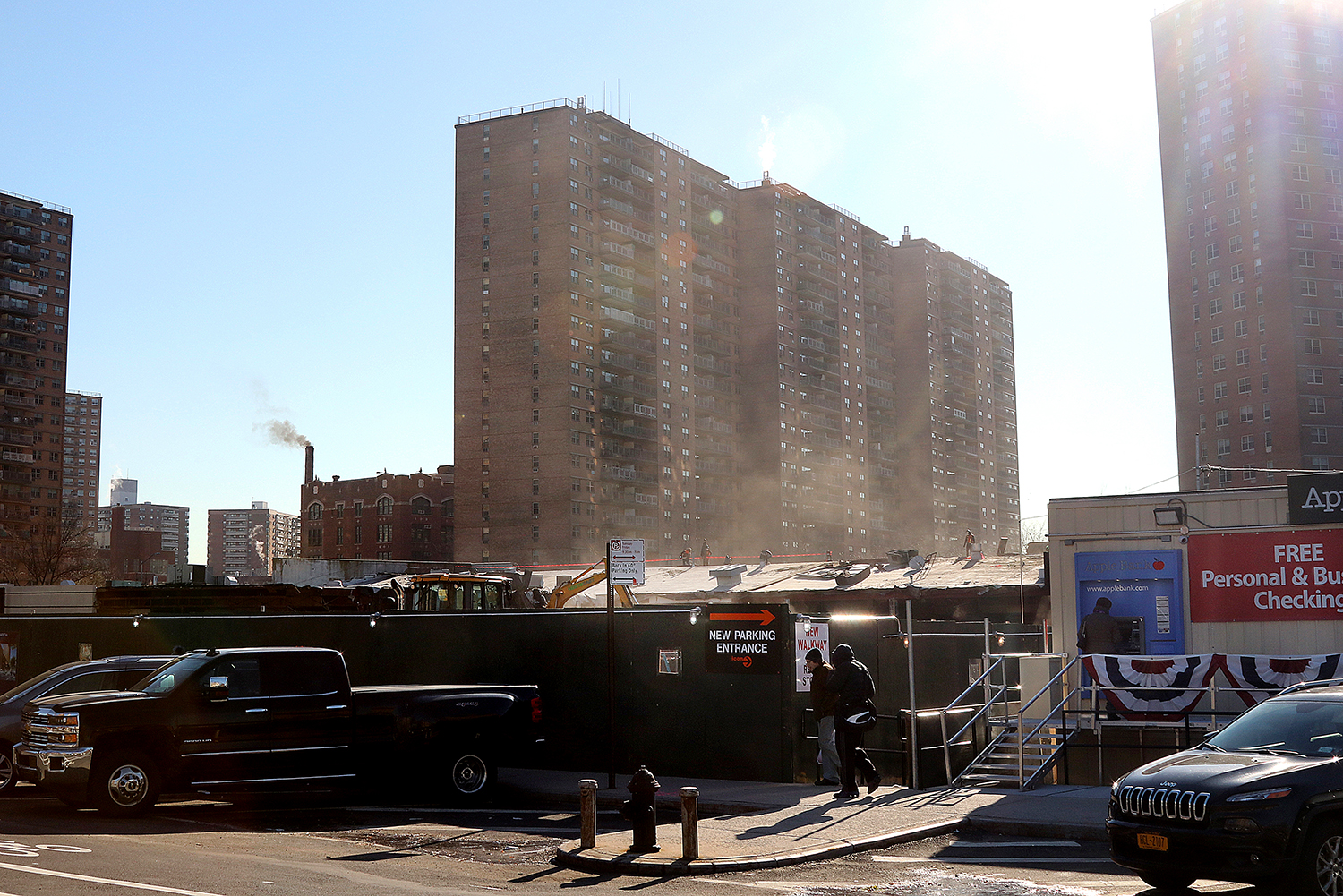 Long-neglected Coney Island Creek is also experiencing a bizarre series of developments. Cube Storage has already built two oversized public storage facilities on the banks of the creek, and a third big box is under construction at the Cropsey Avenue Bridge. Unfortunately, there is no master plan for future public access or maritime development along the Coney Island Creek estuary, and oversized big-box warehouses seem to be the waterway’s future. 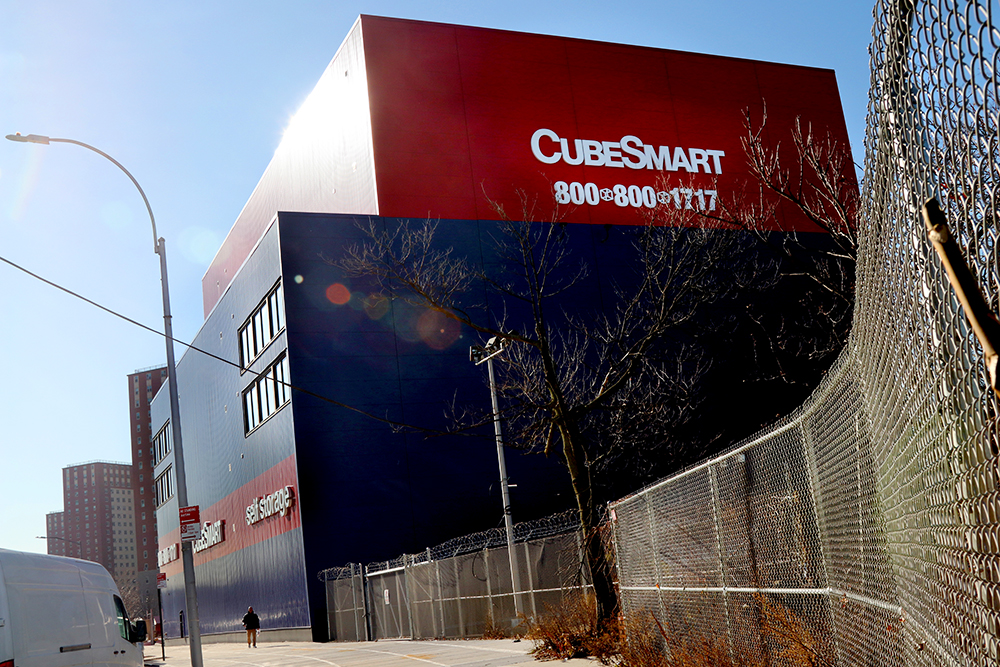 Some of these changes bring back memories. My family moved from Coney Island Houses to O’Dwyer Gardens when it opened in 1969, and I witnessed the area’s transformation during the 1970s. The Catsimatidis site includes the YM-YWHA building on Surf Avenue that was our beloved community center during the 1960s. Cats now owns the abandoned building, and its future is in doubt. Next to the Y was one of the last bungalow colonies in Coney Island, and I documented the demolition of that old complex in 1970. The site has been vacant ever since. It would be wonderful if the new Catsimatidis project actually improved the neighborhood with new stores and affordable housing. Time will tell if this is just another luxury high-rise, cut off from a neighborhood filled with broken promises.

Many believe that high-rise developments will benefit Coney Island in some way, but the unfortunate truth is that climate change will dictate the future of this neighborhood. If current predictions are correct, Coney Island may become an “underwater world” by the year 2100. 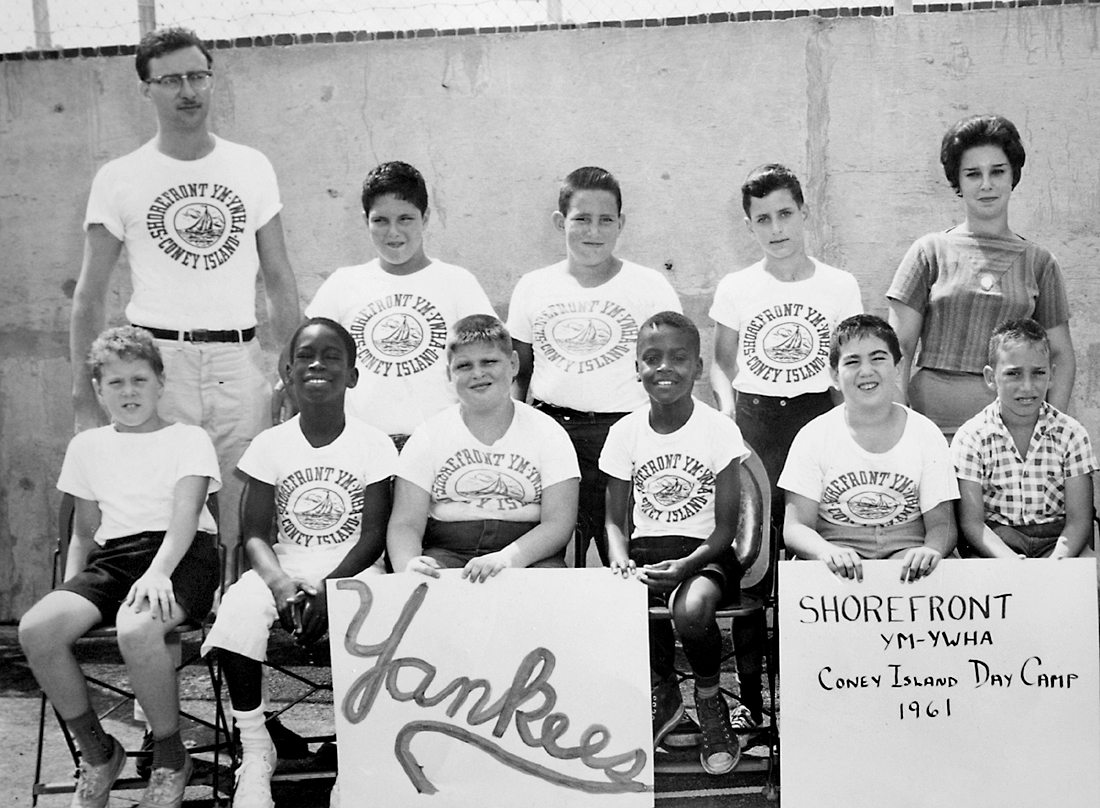 Summer campers at the Surf Avenue YM-YWHA in 1961 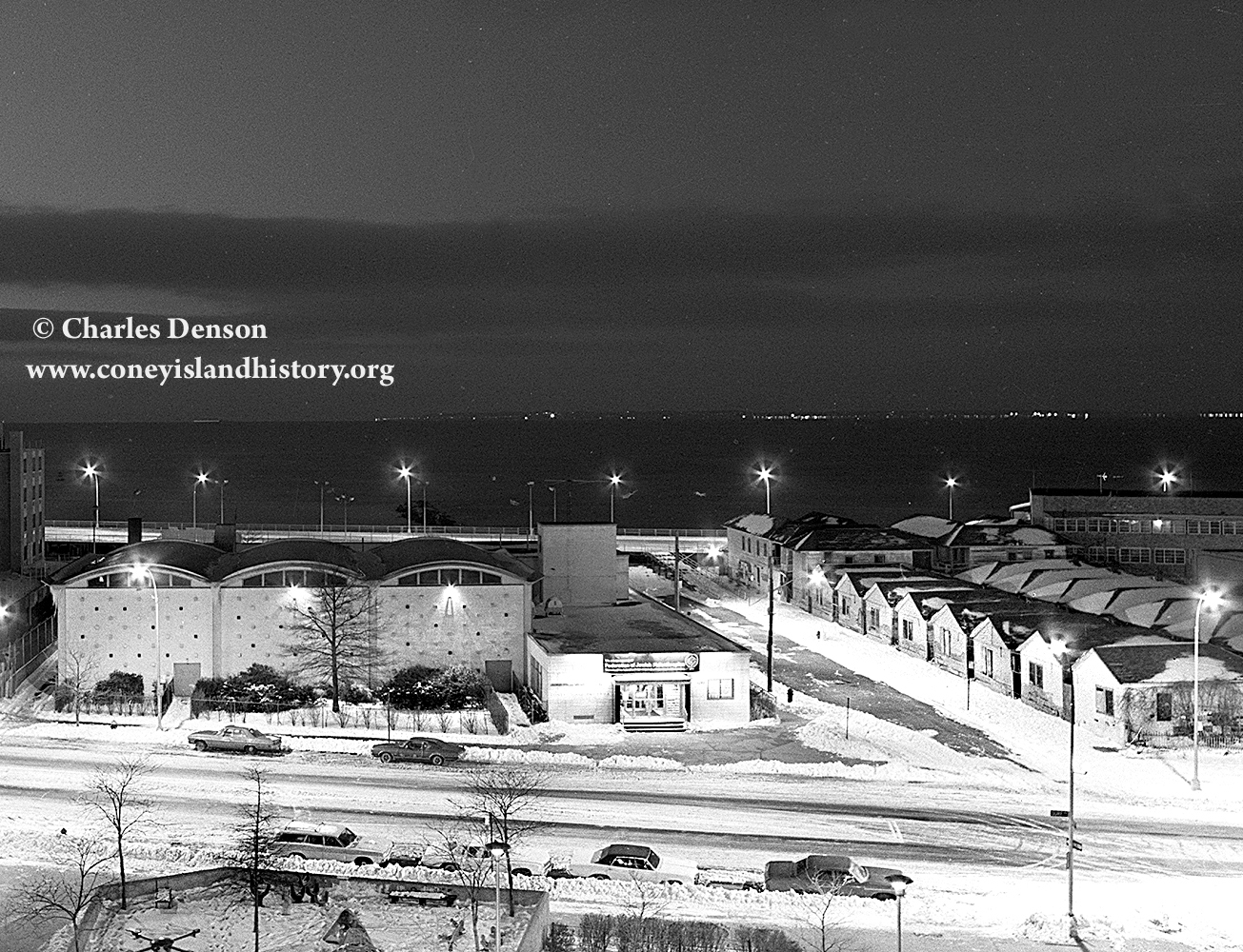 The view at dawn from O'Dwyer Gardens, 1970. The bungalows (at right) were demolished and the Y building (at left) is now owned by John Catsamitidis. © Charles Denson

posted Mar 13th, 2017 in By Charles Denson and tagged with
Add a commentPermalink