The Virginia Reel
posted on Aug 24th, 2008
Dear Mr. Coney Island...
Here I go again. trying to reconcile my vague memories with reality. rode a ride I think was called the virginia reel located just down the block from the bobsled on stillwell avenue near the boardwalk. it had a high red brick wall behind it round tub-like cars that careened down from top to bottom on circular thin tracks. the cars also spun independently . the seats were bench like positioned against the car. we sat side by side around the inside of the car with our legs and knees touching each other. there was a metal pole with a wheel set on top of it which the riders held onto. . this wheel may have been the mechanism for spinning the car on the track. it was a rough ride help me remember. could it be the old luna park reel moved to this location or did it exist at all?
- Joan of South Carolina 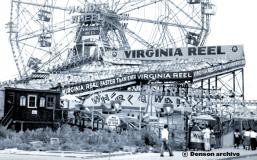 No, you were not imagining things. The Virginia Reel was located on the Bowery at West 12th Street and operated there until the mid 1960s. Elmer Riehl invented it at Coney Island and installed the first one in Luna Park in 1908. It was named for his daughter, Virginia.

Parachute Jump
posted on Aug 15th, 2008
Dear Mr. Coney Island...
Did anyone every get stuck on the parachute jump?
- Christina Noll 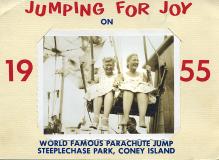 Yes, people got stuck, but it was a rare occasion. The Jump was well-maintained. The mechanics would occasionally stop the ride on purpose as a publicity gimmick -- the screams of riders dangling in the air was guaranteed to draw a crowd. If a parachute became tangled it required a worker to "ride the hook" and lower himself to the jammed cable from the top of the tower to fix the problem. No one was ever killed or seriously injured on the Parachute Jump.

Mystery Bath House
posted on Aug 15th, 2008
Dear Mr. Coney Island...
When I was in my teens during the early 50's I was a fanatic rider of the tornado roller coaster. I remember riding up the lift hill (which if I remember correctly faced toward the ocean) as I looked toward my left side and down into what looked like a narrow street there was a bath house where my girlfriends and I used to gawk at the customers going in and out and sunning themselves wrapped in towels and sometimes bare... would like to know something about the bath house when it closed or is it still there. or was it destroyed when the tornado burned.
- Lauren

The bathhouse you saw was Cook's baths (formerly Cox's Baths) which operated until 1973. It burned several years before the Tornado was destroyed by fire.

Remembering Ravenhall's
posted on Jun 12th, 2008
Dear Mr. Coney Island...
What became of the swimming pool known as raven hall? I remember passing it on my way to the beach. Wasn't it a salt water pool with access to the beach from the swimming pool through a gate near the boardwalk? I remember dancing under the boardwalk at Bay 12 . What a great time back in the early 50's.
- Joan 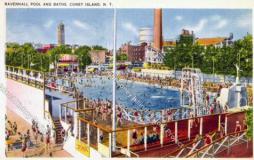 Yes, Ravenhall was a wonderful place that occupied the entire block at West 19th Street. The salt water pool was the largest in Coney Island. There was also a smaller pool next to the Boardwalk entrance, as well as a gym, handball courts, steam rooms, and a small private beach. Ravenhall opened in 1867 as a hotel and over the next century grew into a large resort that was destroyed by fire in 1963, a year before Steeplechase Park closed. The Abe Stark ice rink and parking lot occupies the site today.

Lost Landmarks
posted on Mar 13th, 2008
Dear Mr. Coney Island...
Could you post a map(s) that superimposes where Luna Park, Dreamland and Steeplechase Park were related to today's Coney Island structures? I'd love to see some maps showing where various Coney icons were relative to today, such as the main tower in Dreamland, etc.
- Rick Dauer 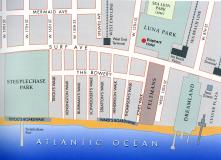 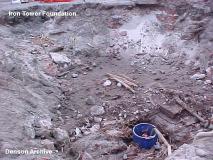 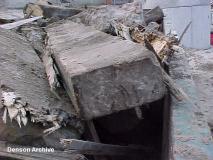 Here's a map from the book, "Coney Island: Lost and Found" that shows the location of the big parks. The Dreamland Tower was located on the site of the Boardwalk ramp to the Aquarium. Dreamland stretched from Surf Avenue to approximately halfway across the present beach; There was no boardwalk when Dreamland was in business.

The Iron Tower, built in 1878, was located adjacent to the site of the new Aquatic Animal Health Center. Many parts of old Dreamland still exist below grade. When the site was excavated a few years ago, the entire foundation of the Iron Tower was revealed, dismantled and carted off. The tower stood on a cribbing of brick and massive pine timbers which, when exposed, were still filled with sap and looked newly cut, perfectly preserved by salt water. The Coney Island History Project is locating and documenting many of these sites for the city, hoping to preserve historical artifacts when new development begins. Drop by our exhibit center this summer and you'll find a more detailed map on display. We're under the Cyclone.

Roller Rink
posted on Mar 7th, 2008
Dear Mr. Coney Island...
I heard about a new roller skating rink opening in Coney Island. Is this true and was there ever one here before?
- Gretchen Godmundsdotir 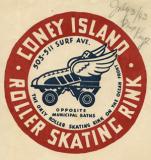 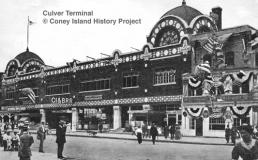 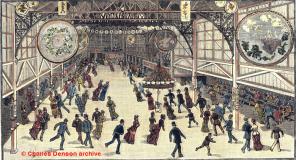 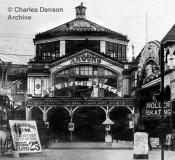 Roller skating has always been popular in Coney Island, dating back to the Sea Beach Palace Roller Rink of the 1890s. The Palace, located on Surf Avenue at West 8th Street, was transformed from a railroad terminal into a rink that hosted roller dancing and roller racing events (see engraving). There were also rinks at Dreamland, Luna Park, and Steeplechase. There are photos of Babe Ruth, dressed like a farmer, whirling around the Steeplechase Pavilion on roller skates.

The Coney Island Roller Rink (see decal and picture) operated in the old Culver Terminal building on the north side of Surf Avenue at West 5th Street during the 1930s-1940s. The Culver terminal was demolished around 1960 to make way for Brightwater Towers. The Coney Island History Project is working on a skating documentary with Dianna Carlin of Lola Staar, who will be opening a roller rink in the boardwalk Childs building this month. We'll also have a display at our exhibit center under the Cyclone. 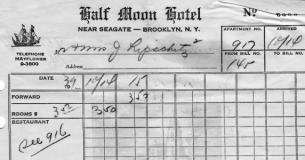 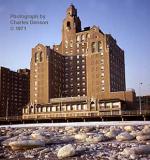 The Half Moon Hotel, with it's great mosaic dome, opened for business on May 5th, 1927 on the Boardwalk at West 29th Street. It was managed by the American Hotels Corporation and financed by prominent members Coney Island Chamber of Commerce, including William Ward, Charles Feltman, Edward Tilyou, and William Mangels. The Half Moon was sited at the outer fringe of the amusement area on the theory that the Boardwalk between the hotel and Stillwell Avenue would fill in with other luxury establishments. Many prominent guests visited the hotel and it remained a popular venue for weddings and banquets.

The Great Depression killed the Chamber's dream of greatness and the hotel sat exiled at the West End until the beginning of WW II when it was transformed into a naval hospital. In 1941 the hotel gained notoriety when mob turncoat Abe Reles fell to his death from a sixth floor window while under police protection shortly before he was due to testify in court. No one knows for sure whether he was pushed or slipped during an escape attempt. After the war the Half Moon became Harbor Hospital and in 1953, the Hebrew Home for the Aged. The elegant building was demolished in 1996 before it could be landmarked.

As you can see from this card, Charles Smith's Gold Dollar hotel was located at Surf Avenue and West 16th Street. The hotel had a telephone so was probably in business around the turn of the last century. 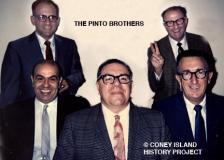 The Pinto Brothers ran an amusement factory on West 8th Street in Coney Island, specializing in kiddie rides. Silvio Pinto also operated the Cyclone Roller Coaster for a number of years before selling it to the Parks Department. All of the brothers have passed on but here is a picture of them. Silvio is in the center.

Indigenous Communities
posted on Feb 6th, 2008
Dear Mr. Coney Island...
I'm a PhD student here at UC San Diego working on a small research project related to indigenous communities in Latin America and have found an interesting connection to Coney Island. A good friend of mine who works with the humanities council in the city recommended that I contact your organization. I'm on the hunt for Â archives from Coney Island and a few other "fairs" in the city from the 1890's. The exhibit/show I'm looking for was a group of Bolivian and Peruvian men that was based at Coney Island during the summer of 1893. Does the museum keep information/archives of Â shows from the late 19th century? Are the archives open to researchers?
- Nancy Egan 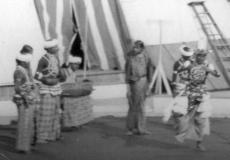 The Bolivian Indian Village exhibit was located on Tilyou Walk at the Ocean, at what would now be West 16th Street. Indigenous natives were common attractions at Coney Island at the end of the nineteenth century, and the humane treatment of the odd visitors became a cause for reformers who monitored the shows for abuses. American Indians, Philippine tribesmen, and Eskimos were were among those displayed in re-creations of their native habitats.

The Bolivian exhibit came to a sad end on August 24th, 1893 when a freak wave during a storm wiped out the entire village as the natives slept in their beachfront huts. The extent of injuries to the indians is unknown and the show did not reopen.