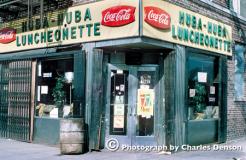 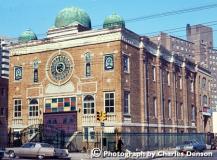 Sorry to hear of your loss. Here are some photographs from the past that will refresh your memory: The Mermaid Theater marquee and owners Sam and Estelle Horwitz posing in front; the Huba, and the Yeshiva.

Magic Carpet Ride and Dragon Cave
posted on Jul 25th, 2011
Dear Mr. Coney Island...
Can you please tell me who ran the Magic Carpet Ride in Coney Island. Also where did the fat laughing lady Minnie Ha Ha come from. Where was she made. Are there some oictures of her that I can purchase? What about her voice? I am also interested in pictures of the dragons cave and the donkey game next to the Magic Carpet Ride. What information can you give me on the man that painted the inside of Playland. I remember the beautiful pictures painted on the walls as well as all over.
- Sal 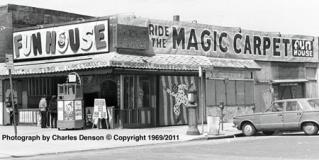 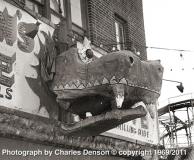 Here's a photo of the Magic Carpet Fun House on the Bowery at West 15th Street. The attraction was run by Edie and Seymour Maxim who also operated the Donkey Game next door. The last version of the robotic laughing lady was actually a German-made laughing male figure in drag. The Coney Island History Project is planning an exhibition of work by the artist who painted the Playland murals. Keep checking our web site for more information.

Abandoned ferry boat in Gravesend Bay
posted on Jul 19th, 2011
Dear Mr. Coney Island...
I lived in Coney Island from 1930's to 1950's. As a boy I often swam in Gravesend bay where Sea Gate began. There was an abandoned ferry boat stuck in the sand alongside what was left of a pier. Do you know anything about it or some pictures of it? Boy do I have memories of the garbage dump at the end of Sea Gate where they used to burn the garbage. I now live in the San Diego, California area with my family.
- David Moses 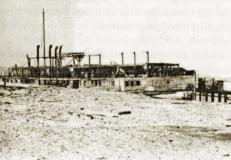 The 123-foot ferryboat was named the Sylph and her scant remains are sometimes revealed when the beach at West 37th Street becomes eroded after storms. A few weathered pilings from the pier also can be seen and they mark the boat's location just to the west of the pier.

The ferry made scheduled commuter runs from Sea Gate to Manhattan until around 1950 when the service ended and the ferryboat was abandoned at the pier.

The Sylph was commissioned in 1898 as a naval patrol boat and also served briefly as the presidential yacht in the 1920s before being sold in 1929 for use as a party fishing boat out of Sheepshead Bay. The Sea Gate run began in 1939.

The boat was a fixture of my childhood and I remember playing on the wreck in the early 1960s, before a series of fires and storms leveled it to the waterline and it was buried beneath the beach. Here is a photo of the boat taken circa 1938 and one of the ruins at the pier taken in 1950 by Phil Horn.

Coney Island Shooting
posted on May 12th, 2011
Dear Mr. Coney Island...
I used to stay part of the summer with my aunt in Greenpoint. One day she gave me a choice of going to the movies or going to Coney Island. Although I loved Coney Island, I hated the train ride so I chose the movies. The next day, she told me that it was good that I chose the movies because somebody shot-up Coney Island and nine people died. This would have been 1960 or so. Did this shooting really happen? I've googled it with no results. Thank you!
- Elaine

The shooting took place in 1962. Two policemen died and six others were shot. It was a turning point for Coney's reputation. I remember it well. The incident is mentioned in the book: Coney Island Lost and Found. Here is a partial clipping:

Riding the Steeplechase
posted on May 12th, 2011
Dear Mr. Coney Island...
Did female riders on the Steeplechase horses ride sidesaddle or astride during the early years of the ride?
- J. Bowers

Painting the Elephant
posted on Mar 28th, 2011
Dear Mr. Coney Island...
Could you tell me where the giant wooden elephant hotel was located? There is a painting by William Merrit Chase, entitled Landscape Near Coney Island, that depicts a couple of ladies in Victorian garb, picking berries along the seashore (see attacvhed). In the background, on a barrier beach across a narrow bay, is the elephant. I suspect the ladies are picking berries where the Belt Parkway is now, somewhere around Dreier Offerman Park. I’d like a more precise location for the hotel to confirm my hunch on where the scene is located or getting a better bearing. Thanks!
- Mike 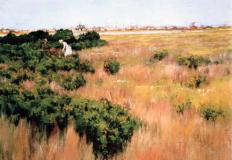 No attachment came in with your email but I know the painting and have used it in my presentations. The view is looking east and the women are standing at Coney Hook at the border of Sea Gate (roughly where Coney Creek Park is located).

The bay behind them was later filled in to create Kaiser Park. The Elephant Hotel was located on the north side of Surf Avenue near 12th Street. 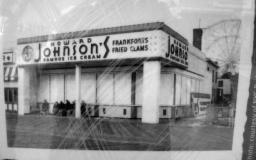 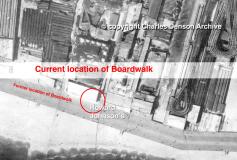 That building was on the Ward property at the corner of Jones Walk at the Boardwalk. It was demolished when the Boardwalk was moved inland in 1941. Here's an aerial view: Hope this helps.

The Health House, 1917
posted on Mar 18th, 2011
Dear Mr. Coney Island...
I have some letters from a great aunt written in 1917 when she was working for the summer at Health House, on Surf and W. 23rd street. It seems to have been a place for mothers to send their children. She wrote of a measles quarantine, which was unexpected. Any idea of what this place was? Thanks!
- Susan 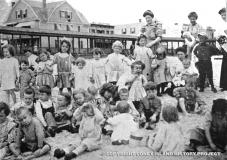 The facility was the Children's Aid Society. It was located in Coney Island from the 1870s until 1924. There were four other similar organizations. Mothers and their children, mostly from poor neighborhoods, were invited to stay in beachside bungalows or the Surf Avenue hospital to learn about child-rearing, health care, and good hygiene.

Men were not allowed to stay but could visit on weekends. Here is a picture of the facility.

Carleton Court
posted on Jan 7th, 2011
Dear Mr. Coney Island...
I just read your answer to an inquiry about a bungalow colony called Villanove Court. My family rented a bungalow in a place called Carlton Court in the summer of 1954. Do you have any info on that place?
- Chef Henry 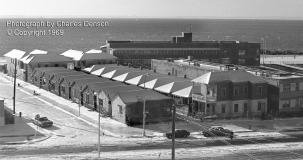 Carlton Court was located on West 35th Street between Surf Avenue and the Boardwalk. The resort was owned and operated by Agnes Stephenson and then sold in the 1930s to Herman Berman and Joe Feld of B&F Bungalows. They also operated the adjacent Sea Gate (Villa) Casino on West 36th. Carlton operated from around 1910 until 1966 when the property was sold to Max Berman who demolished the bungalows in 1972.

The furnished bungalows were rented for the whole season, the most expensive being the two story boardwalk structures that offered a view of the ocean. There was a central path that led to a "pavilion" by the Boardwalk that had handball courts and tables and chairs where people gathered to play cards or Mah-Jong. Sometimes B&F hired bands to play at the pavilion dances. Carlton tenants were mostly repeat seasonal customers who considered themselves one big Coney Island family!

Family Photo
posted on Dec 22nd, 2010
Dear Mr. Coney Island...
I have a family photo that I have guessed is at Coney Island, but I can't seem to find any images online that show the landmarks in it or the right angle for me to identify it properly. Can you tell if it is at Coney? From the ages of my grandparents and the some of the children (my aunts & uncle) in it, my guess is that the photo is circa 1920 - 1922. (More likely the earlier year.) From what I have read, if it is Coney at that time then the roller coaster could possibly be the Giant Racer?
- John 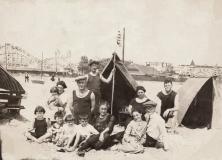 The photograph was taken between West 8th Street and West 5th on the public beach at the former site of Dreamland. The turreted building on the right is the Sagamore Hotel, on the corner of West 8th and Surf Avenue. The coaster is the Giant Racer, and the two towers behind it belong to Luna's Aquadrome entrance at West 10th Street. The tent-like structure behind the tent in foreground houses the Dreamland Circus Sideshow and the billboard just behind the tent was located above the L.A. Thompson Scenic Railway. Nice photo!