Dear Mr. Coney Island...
My Great grand uncle was Lazar Hann. According to family history, he and his wife, Fannie, owned and operated a restaurant at Coney Island around 1910-1920. We were told that it was the first Romanian restaurant at that location. Can you confirm this? Or, provide the name of the cafe ? Thanks so much for your help.
- D. Preston 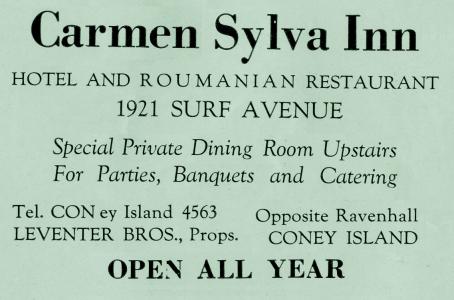 My parents lived in Coney Island and then Sea Gate from the 30's until the late 60's. Carmen Sylva's was one of their favorite restaurants and I went there as a young boy.
My grandmother was Roumanian so it was a place for family celebrations. I vaguely remember it having elegant with furnishings, dark wood, a long bar.
My parents were friendly with the owner Sam Puritz (?) and had a brother Leo. They were European born. I assumed the place was named after Sam's wife who I don't recall. But today, Carmen Sylva was mentioned in a book I am reading set in France in the late 1900's. I googled the name and found it to be the pen name for Elizabeth, Queen of Roumania 1843-1916 who wrote poems and novels.

My father's Aunt Fannie (same name) and her husband had a Romanian restaurant at Coney Island, that we thought was one of the first ones there.

But my Aunt Fannie, born Gruber, married a man named Singer. Otherwise I would have thought that it was the same people.

Fannie was born in Romania in the 1890's and came with her large family to the USA in 1900.
I am not sure exactly when her husband and she had the restaurant but thought it would have been started in the 1910's, or 1920's and also still operating in the 1930's.

My father might have had an arguement with his aunt's husband and not gone there after I was born in 1945, but I remember him taking me to Coney Island to see someone in his family when I was younger than 10. I think it was this family. I could see the amusement park from the address where my dad went.

And there was an incident, possibly about a car accident where a young boy was maybe hit and died, near this restaurant according to an older brother of mine, perhaps also about this time.

I and my daughter do the family tree work for my family, but not just family tree, also about the people's actual lives, and we are both very interested in anything we could find out about this family, this restaurant and also about the Romanian communtity on Coney Island.

Was Coney Island originally a very mixed community of people from different cultures, or was it more people who came from Europe who settled there where they had friends already there?