Dear Mr. Coney Island...
About 1946 my family visited Coney Island. My older brother and I made some records there. Both of us sang a song and it was broadcast over the loud speaker and recorded on records. The records have long since disappeared but I wonder if you might have any information about this recording booth? Thank you!
- Ann Marie

"Voice-O-Graph" machines resembled phone booths and there were at least two dozen of them located in arcades all over Coney Island in the 1940s. The machines were manufactured by International Mutoscope. The company also made the Photomatic photo booths that printed black and white photos in a small metal frame. In the 1940s it would have cost 25 cents to record a record and a personalized label with your name on it was extra. You could sing a song or record a birthday message.

Your voice was recorded at 78 RPM, a technology that's hard to find today. The machines switched to 33 RPM in 1957 and some were still operating in Coney Island through the mid-1960s. Here is a picture of a record that was recorded at AmuseOMat arcade on Surf Avenue.

Would love to hear your recording! 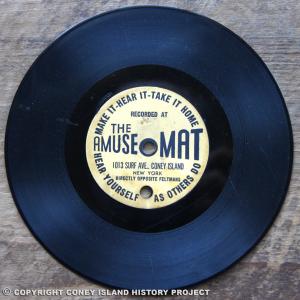 Do you know of the company that designed,created,build and distributed The
Movie mutoscope machines that showed old movie comedies,cartoons,serials
etc to the patrons of Coney's penny arcades?

My mother made a record in 1947 at Coney Island and I have the record. Thank you for your post because I could not remember the speed and I want to save it to dvd. Do you know anyone that can help me with this or is it that I just have to find a record player with a 78 speed. I remember hearing it played in about 1965 and I don't know if it has been played since.
Nancy Folk
Ft. McCoy, Florida

I did the same on my 10th birthday in 1952. You can indeed play them on any 78 rpm turntable; it will work better if you can find one that uses an older mono cartridge.