I love your website. What a treasure trove of memories! Could you tell me where the building in this photo is (was?) located on Coney Island? I assume that we are looking at the front of the building as it faces the beach. Do you have any info about it?
Many thanks,
Elaine Marino

Thank you for contacting the Coney Island History Project! The building in the background was located at West 32nd Street and the Boardwalk. It was an extension of Lincoln Baths that was added when the Boardwalk was built in 1923. There were apartments on the second floor and a great restaurant at the  Boardwalk level called Sam's Knishes. Next door was Larry and Vinny's Pizza restaurant. Lincoln Baths was demolished in 1981. Looks everyone in the photo was having fun! 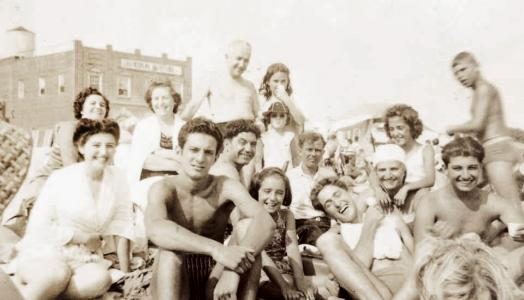