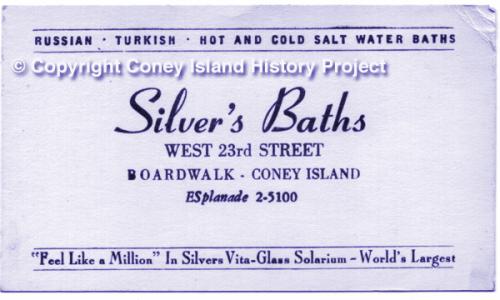 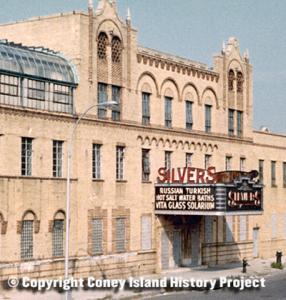 My great grandfather on my mom’s side was Barne Silver who was the founder of Silver’s Baths (his name did not end in a “y”). This business did not pass down to his son, Harry Silver, who was my grandfather, so by the time I was born in 1965 it was long gone from the family.

I too remember my father, uncles and Zeda (all immigrants fromEastern Poland) taking me to Silvers in the 50’s as a young teenager on weekends. My memories are similar to those already posted. My family had a certain order to the day. After checking in and stoing our clothes in a locker, covering ourselves with a sheet, we would head down to the baths. First was the dry heat room (somewhat like a sauna but white tiles lined). Then, as I was about to pass out I was taken to the small ice cold salt water pool to be revived. Then came a series of stem rooms. Salt steam, pine steam and sweet water steam. Another dunk in the ice pool and then a session in the room with the high power hoses sprayed on me with delight be my laughing uncles and grandfather. At the end of the process was a rubdown, called a plaitza, with short handled broom of leaves and twigs. This was apparently meant as either as a form of torture or deep cleanser. At this point I could hardly walk but my father said it was time for lunch in the cafeteria. Mostly Eastern European delights. Schmaltz herring, smoked fish and lots of rye or scotch whiskey. After lunch I would lay down on one of the lounges, covered myself with a sheet, while the old guys played pinochle or gin rummy. The memories are fresh and wonderful.

Would go once a month with my Dad and his 2 brothers. First time I was about 9. I loved everything about the place. Would walk around wearing a white sheet (towel) and we would eat at communal tables. Some of my best memories.