Dear Mr. Coney Island...
I was born and raised on W 33rd Street and Surf Avenue. Growing up in the early 1970's there was a large brick house along the boardwalk, which was razed to make way for the Sea Bay Manor, the nursing home on 33rd Street. I recall the building being called the "Jefferson House" but don't know what it's origins were. I remember being about 4 years old and being inadvertently pelted by debris being tossed out of the windows by the wreckers who were clearing out the building before it was destroyed. PS: My family lived in building 1 of O'dwyer Gardens, first on the 13th floor, then the 8th floor. My mother still lives there. Thank you.
- Gerard

The building was Jefferson Baths, a bathhouse and summer resort built around 1910. The establishment had rental lockers, a tree-lined courtyard, bungalows, summer apartments, and a bar on the boardwalk. The complex was demolished in 1970. It was one of Coney's "presidential" bathhouses: Lincoln Baths was on West 32nd; Roosevelt Baths was on West 30th; Washington Baths was on West 21st. 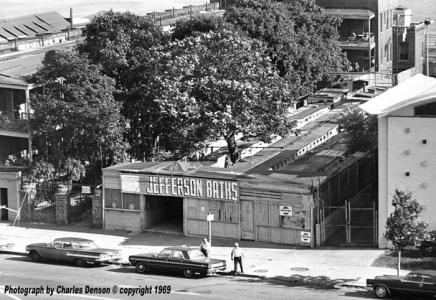 Dear Mr. Coney Island,
My family were regulars at Jefferson Baths during the 30's, 40's and 50's. We gathered every week end and enjoyed the gathering of friends and family. The steam room was wonderful and the long term attendant was always looking after us children. I can't remember his name; do you?
The beer garden across the street, Dalton's was the favorite after beach gathering place. I think they ran Jefferson during this period.
Thanks for the memory.

If I recall the Jefferson was owned by the Shavin family. They lived in the 2nd floor all year. It was one of the best looking bungalows in the Island. Remember Sam's

Hi Mr Coney Island
My Father & Grandfather owned a bar on W 35th & Surf , called the "Mayors Place " My Father ran the Bar and my Grandfather ran the " people " as a kid my Grandfather would take me & my 2 cousins across the street to the bath house .... memories I just can't write for everyone to view ....but what a blast spending my summers in CI
We had Mary's sandwich shop on W 36th St and Larry & Vinny's pizza up on the boardwalk at W 33rd St.... great memories !!

Yes, it was owned by the Shavins. The old lady Shavin ran it with a iron fist. How do I know.? They were friends of my mother. My sister and the Shavin daughter went to school together. Actually they were in the first graduating class at Lincoln H.S.. ( maybe second).
We played stickball on west 35th street and went to Mary’s for a great ham on a long Italian bread with mustard. Of course you had to stick your hand into her ice cold soda box for a Pepsi that I can still taste... love those memories. Thanks for not letting them fade away. Jerry