Dear Mr. Coney Island...
I have a picture of my husband's grandparents taken when they were "courting" sometime between 1909 - 1911. The post card-photo was taken at Dream Studio in Coney Island. Is there anything you can tell me about the studio or proprietor: H. Tarr? They are in a car. she is behind the wheel on the right side of the auto, both are wearing hats) hers is a large flowery one, his is a straw hat and there appears to be a "fake" white dog on the hood of the "car". Anything you can tell me about the studio. photographer or picture would be appreciated. I can forward a copy if that would help. Thank you.
- Cathy Sperling

Mr. Tarr operated a souvenir photo postcard business called the Dream Studio on Surf Avenue at West 6th Street below the Pike's Peak Roller Coaster. The studio had numerous full size props including an early automobile and a Wright Brothers style airplane. We have many of his images in our archive and the little white shaggy dog is a constant in these photos. Many of the studios had silly toy props that were used to loosen up the subjects as their photo was taken.

The Dream Studio was destroyed in the 1911 Dreamland fire but reopened shortly after with a new painted backdrop that depicted the burned out ruins of the park. The enclosed photo shows the Dream Studio below the Pike's Peak Railway (circled). The entrance to Dreamland is at right and the Iron Tower is behind Pike's.

Attached is another photo of the little white dog! 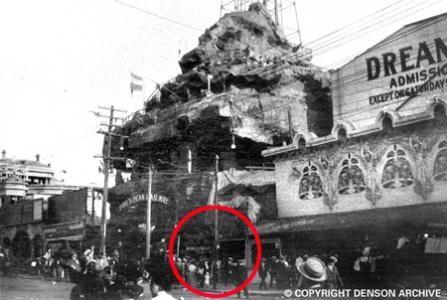 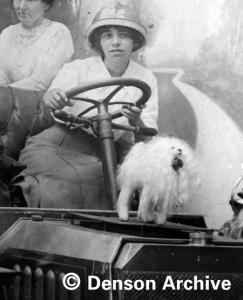 I have been collecting RPPCs of studio portraits, presumably from Coney Island. I have wondered about matching the prop automobiles (and their fake license plates) to the specific studio. This is a great hint to the Dream Studio, thanks! Any chance of tracking down the others?

Hello,
I have a small photo of my great grandmother. It is undated, but on the back, in, I assume, the photography studios print, it says:

Can you tell me anything about this studio?

Thank you so much,
Lynda Arledge

The only known photo of my great grandfather is in that famous car and white dog. A postcard sent to my grandmother while courting. They married, had three sons, and he died during the 1918 flu epidemic when my Dad was two years old. My grandfather apparently had a few photos done that day, which he mailed to my grandmother. She never received any except the one in my possession. Since this turns out to be the only photo of him, it would be wonderful if there were any photos saved from those days. Are you aware of any archived photos?
Thank you.

H. Tarr, I believe is my great great grandfather.

You say H. Tarr, do you mean Halley Tarr? As in H. Tarr, INC.? If so, what other information do you have on him? I would like to learn more.

I have a photograph that says “H. Tarr 500 Fulton Street Brooklyn, NY”.

Is there any way to get a timeframe for this one? Thanks.