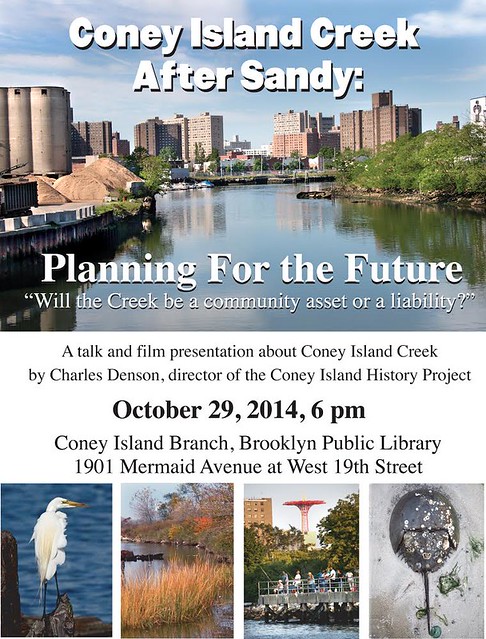 On October 29, 2014, the second anniversary of Hurricane Sandy, Charles Denson, director of the Coney Island History Project, will present "Coney Island Creek After Sandy: Planning for the Future." The talk and film screening will be at the Coney Island Branch of the Brooklyn Public Library at 6pm and is free and open to the public. The Library is located at 1901 Mermaid Avenue at the corner of West 19th Street.

"Coney Island suffered major flooding during Hurricane Sandy, prompting a city proposal to transform Coney Island Creek by building a dam and flood gates at the creek's mouth to prevent damage from future storm surges," writes Charles Denson. "A feasibility study that will soon get underway also calls for a long-needed restoration of the creek's wetlands. The main problem with the proposed dam is that it would turn Coney Island Creek into a toxic cesspool fed by storm sewers and would do little to prevent flooding. The tidal barrier idea is an expedient fix conceived at a time of crisis but is not the best long-term solution."

"Coney Island's first attraction wasn't the beach or amusements: it was the thousand-acre tidal estuary known as Coney Island Creek. The first hotels and resorts in the 1820s grew up around this pristine tidal creek known for its hunting and fishing. The next century would see the wetlands filled and the creek fouled by industrial waste, garbage dumps, and sewage. The wetlands that protected the area from flooding were filled in and developed."

"When I began documenting Coney Island Creek in the 1960s, the waterway was at its lowest point, polluted and neglected and used as a dumping ground. The creek has improved greatly since then, the result of the Clean Water Act of 1972 and a new awareness of the creek's potential. Three beautiful parks now surround the wide entrance to the creek, and a major clean-up of the creek's narrow headwaters in 2006 removed mountains of toxic industrial sludge. It would be a shame to see these improvements reversed." 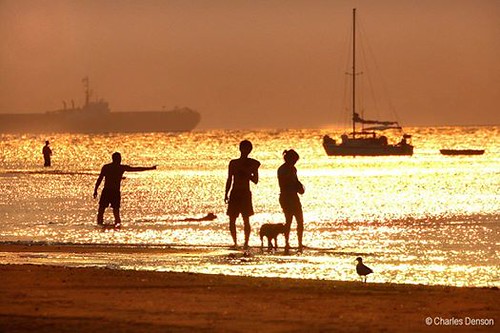 "My documentary will tell the history of Coney Island Creek and demonstrate its ecological, educational, and recreational importance to the surrounding community. The public needs to learn what's at stake and to have an informed voice in the future of this resource and an awareness of the successes and failures of past projects that have led to the city's current call for a tidal barrier. Passive, natural protections, such as oyster beds and sand dunes, will provide more reliable protection than dams and culverts."

"Two years ago I had a photo exhibit about Coney Island Creek at the Coney Island Library. It showed 40 years of my documentation. On the night of October 29, the library was destroyed by Hurricane Sandy and, along with it, my photos and displays. It's a wonderful feeling to be back at the restored library and to continue my story." 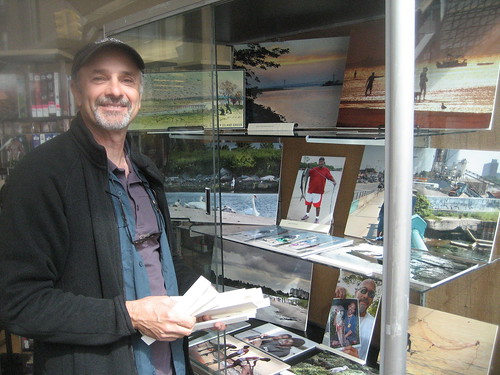 Charles Denson at his Coney Island Library exhibit "The Secrets of Coney Island Creek," which was swept away when the library was destroyed by Sandy

Charles Denson, a Coney Island native, has been documenting the Creek for over 40 years and is working on a book and film about the waterway. He has given numerous lectures and presentations concerning the Creek at venues that include the New York Aquarium, The Coney Island Library, Kingsborough College, Brooklyn College, and at various locations in the Coney Island community. In 2013 Denson received the Herman Melville Award from the New York State Marine Education Association for his contributions to marine education through his work.

Today in 1898 Edwin Prescott patented his #LoopTheLoop #RollerCoaster. In 1901, he built this one in #ConeyIsland a… https://t.co/CsZcCvGsLR
16 hours 27 min ago

RT @ConeyIslandFun: It's #NationalRollerCoasterDay! Check out the thrilling rides in Coney Island🎢 Deno's @WonderWheelPark is offering FRE…
16 hours 41 min ago