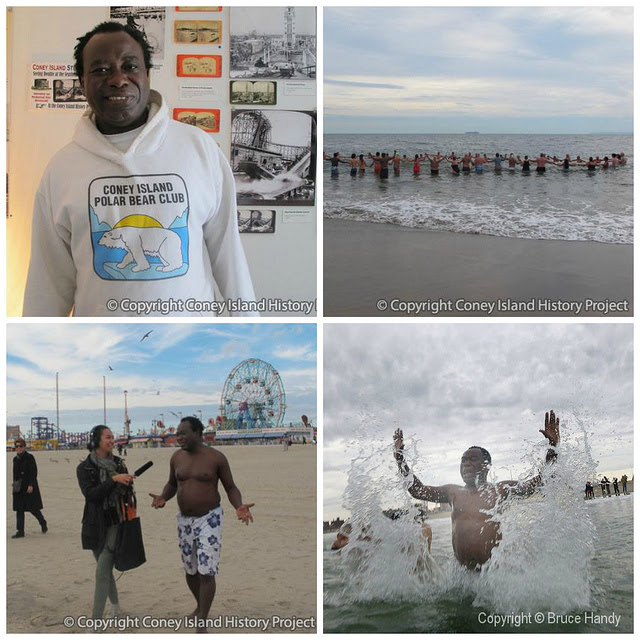 On January 1st, the Coney Island Polar Bears will kick off their 113th year of winter swimming with the New Year's Day Plunge into the Atlantic. Among the recent additions to the Coney Island History Project's Oral History Archive is an interview with Polar Bear Club member Abiodun "Abi" Bello, which you can listen to on our website.

Interviewer Samira Tazari mixed audio recorded on November 1st at the first swim of the season and at the Coney Island History Project's recording studio. "What most people don't know is the Polar Bears swim every Sunday from November," says Bello. "Trust me, try it one day, you're going to like it." The native of Lagos, Nigeria, has been swimming with the Bears since 2010.

After moving to New York City in 1988, Abi Bello lived in Coney Island for two years, but did not swim here until a running injury sent him in search of "the best therapy." He speaks enthusiastically about the health benefits of cold water swimming, the camaraderie of the club, being the last one out of the water, and how you can join and support the January 1st Polar Bear Plunge. The Club's New Year's Day swim is a fundraiser for Camp Sunshine, which provides recreational programs for children with cancer and their families.

RT @lotuswinnielee: No, this is not Superman, it’s the Iceland Gull in Sheepshead Bay in Brooklyn! #icelandgull #birdinflight #birdwatching…
1 day 16 hours ago