To anyone who spends time on Coney Island Creek, the revelation that 16 buildings at the Beach Haven complex were illegally pouring 200,000 gallons of raw sewage into the creek on a daily basis came as a shock. We were assured in the past that the Avenue V Pumping Station, recently renovated at a cost of $210 million, would prevent this sort of pollution. The storm sewer outlet at Shell Road, designated CI-641, has been a notorious source of pollution for decades. What’s particularly disturbing is that this latest incident was not reported to the community when discovered. The many people who were using the creek for food and recreation during the summer never received a warning. 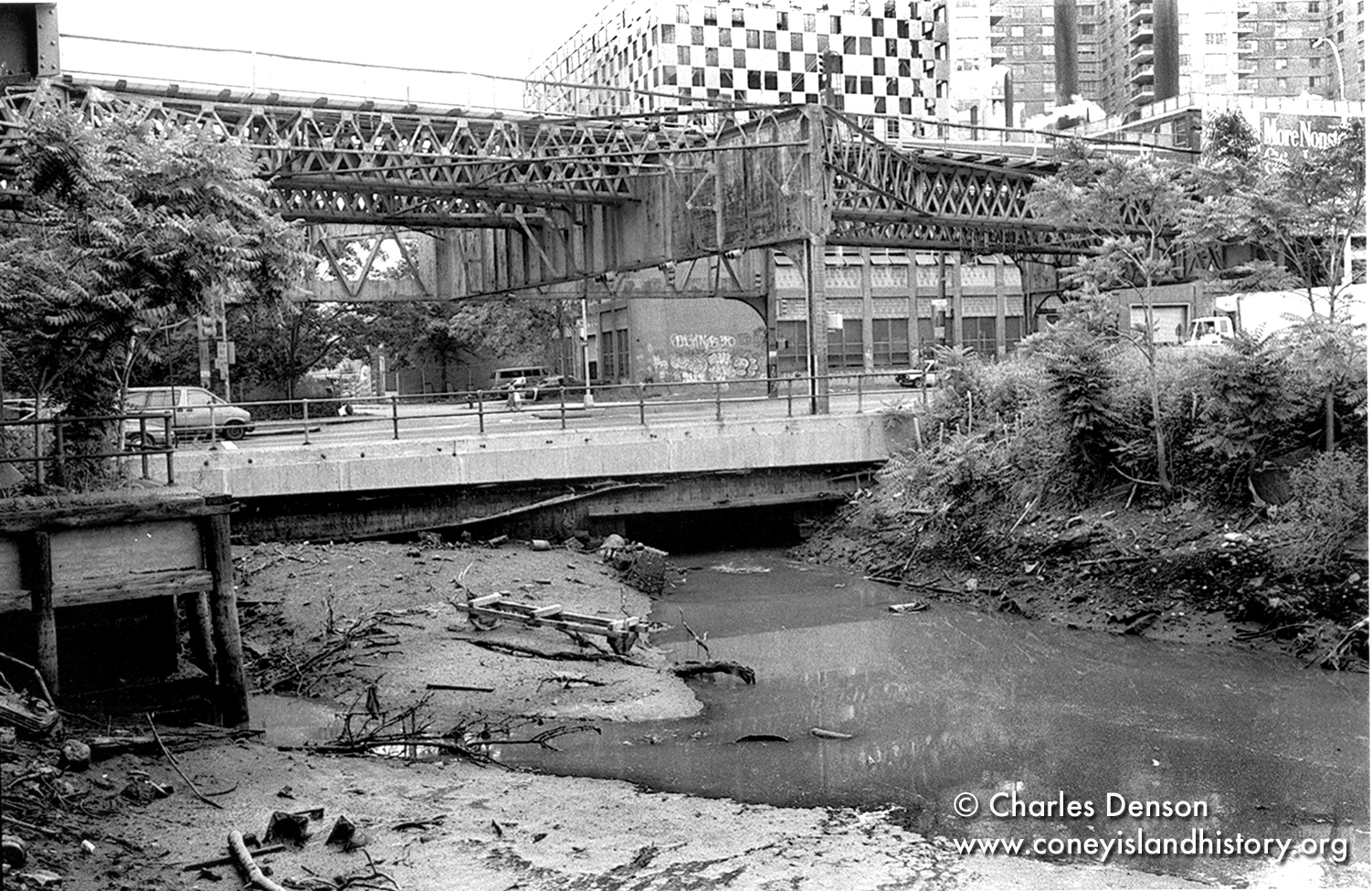 The storm sewer at the headwaters of Coney Island Creek at Shell Road was found to be spewing 1.4 million gallons of raw sewage into the waterway every week. The source was an illegal sewer hook-up at the Beach Haven housing complex.

It’s ironic that Beach Haven, built by Fred Trump 60 years ago, was the source of this latest fiasco. The Trump Organization, led by Fred and son Donald, had its headquarters at Beach Haven, and Fred Trump was fined in the past for filling and polluting the creek. We pointed out these facts in our recent exhibit about Fred Trump’s scandalous 1966 demolition of Coney Island’s Steeplechase Park. The Trumps no longer own the buildings. 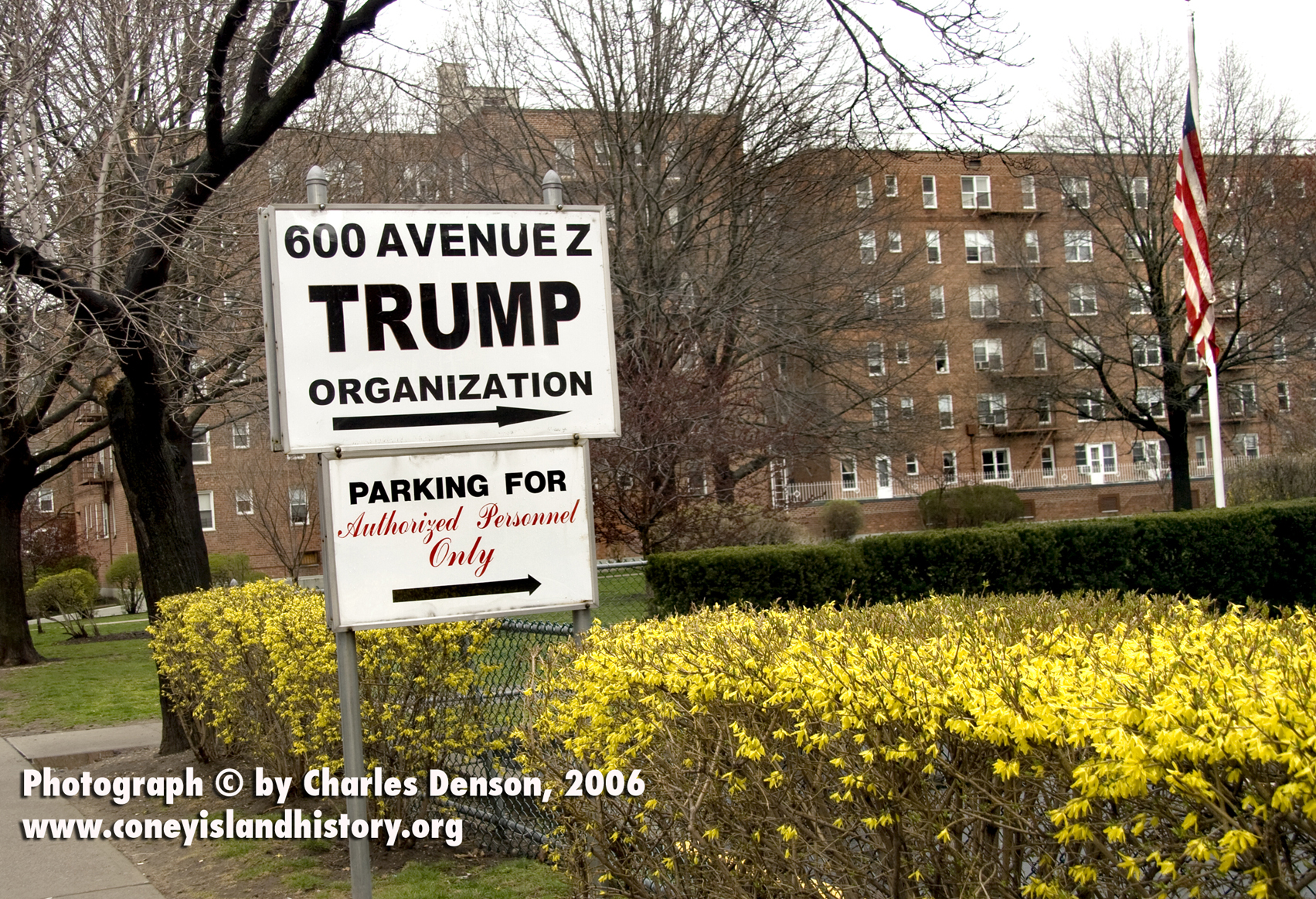 The Trump Organization offices at Beach Haven, 2006. The Trump's have since sold and the housing complex is now reportedly owned by controversial developer Rubin Schron.

In the 1960s Fred Trump was fined for dumping in the creek and damaging sewers and drains.

Unfortunately, this recent discovery is not unusual. Many other illegal sewage hook-ups to the creek’s storm sewers have been discovered in the past, most recently at the OH-021 CSO outfall at West 15th street.  Another notorious outlet is the mysterious one at the end of the mudflat at Shore Road in Calvert Vaux Park. It’s a direct drainage outfall, and its source is still unknown.

On September 15th I was taking a water-quality sample at the site in Calvert Vaux Park and was nearly overcome by toxic fumes. I had to dispose of the “mud shoes” that I’d worn into the creek, as it was impossible to remove the black oily substance that permeated them. Environmental activist Ida Sanoff had also noticed the stench the day before when she and her husband were driving along Shore Parkway. She reported it to Steven Zahn at DEC on September 14, noting that this was a “dry weather” incident and not related to runoff or overflow. This wasn’t the first time Sanoff had reported this problem. We’re still awaiting an answer as to the source of these noxious incidents on the creek.

Water sample from Coney Island Creek for the Citizens Water Quality Testing Program of the Department of Earth and Environmental Sciences at Brooklyn College, September, 2016. Partnership for Parks, Coney Island Beautification Project, and the Coney Island History Project have been sampling.

These unfortunate incidents and many others highlight the problems with the city’s proposal to install a flood control dam on Coney Island Creek before a cleanup of the waterway takes place. The EDC’s dam project is still in the planning stage, and was recently added to the Army Corps Jamaica Bay Reformulation Study for flood control. It’s obvious that the gates of this flood barrier will clog up with floatables and silt and block the normal flushing action of the tides. This dam could create a toxic cesspool that might back up into the surrounding neighborhoods during a heavy rainstorm. The pollution problems concerning the creek need to be addressed and corrected as part of any flood control construction plan. Time is running out. 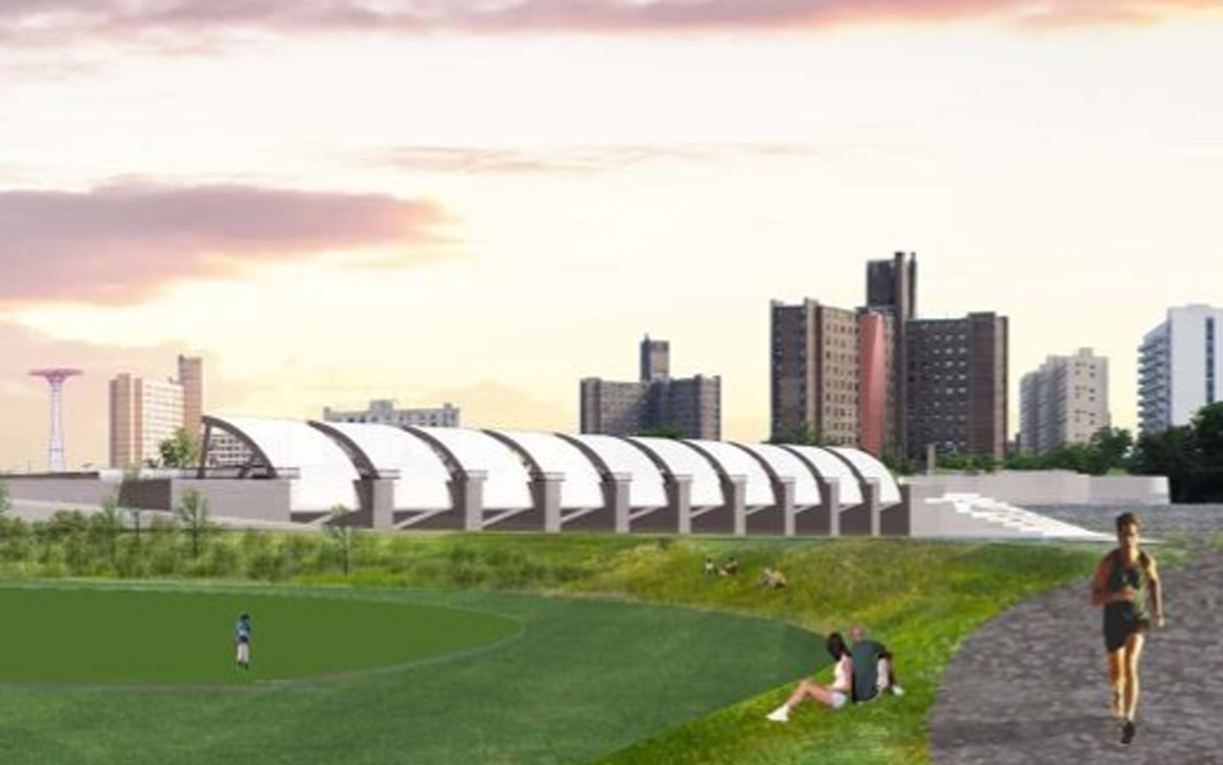 The shoreline of the creek is now undergoing rapid change by developers, none of it maritime related. A demolition permit has been issued for what may be Coney Island ‘s oldest structure.  The Shell Road House, one of the last private homes located on the banks of the creek and believed to date back to the 1870s or earlier, will soon fall to an oversized development. The historic Great Eastern Company’s coal silos on Neptune Avenue were recently demolished for yet another Cube storage warehouse. And now Christine Quinn is planning a homeless shelter on the toxic site formerly occupied by Brooklyn Yarn and Dye Company, the factory that poured toxic aniline and chromium dye waste into the creek for several decades. There seems to be no master plan or guidance for the future of Coney Island Creek. 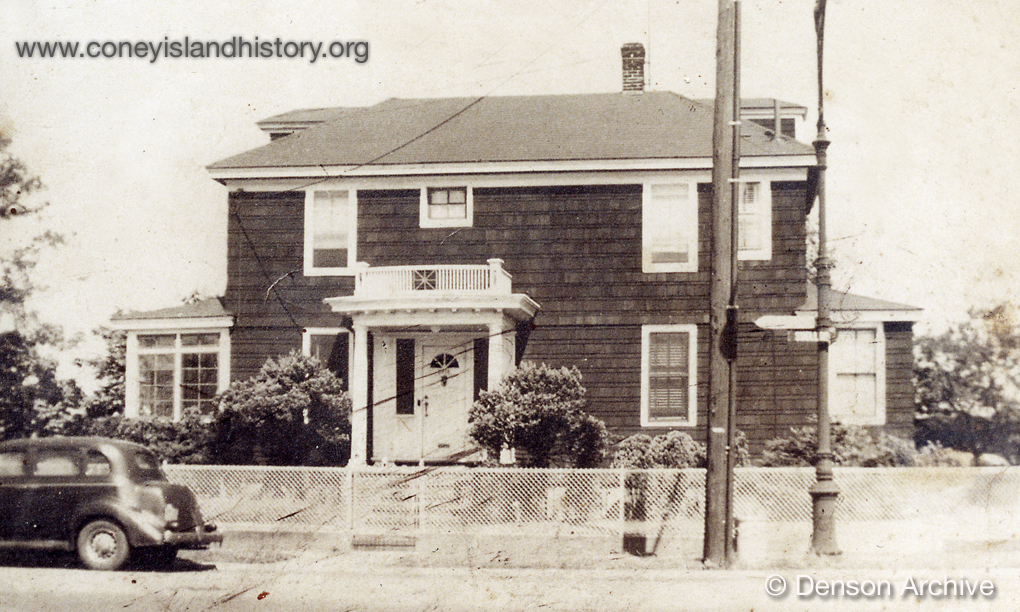 The soon-to-be-demolished Shell Road House on Coney Island Creek, 1940s. The house was moved slightly and turned sideways in 1928 when Shell Road was widened and realigned​. 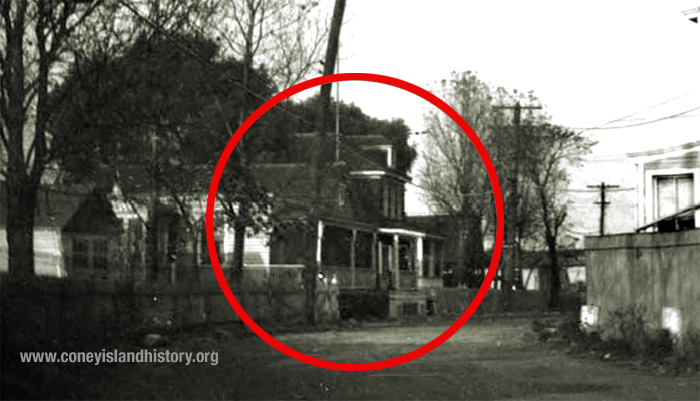 The house at 2916 Shell Road circa 1920, before the street was paved and widened. The Van Sicklen farm house and Coney Island Toll House were next door. Both were demolished at the time the street realignment was done. The old Coney Island Plank Road terminated at this location. A stub of the old road was later renamed Triton Avenue.

The only good news is the city’s $32 million wetland restoration plan that is out for an RFP. This project restores marshland and provides improved public access along the shores of Calvert Vaux Park and Kaiser Park at the mouth of the creek. “Passive flood control” rather than mechanical solutions is what we now need to focus on.

Today in 1898 Edwin Prescott patented his #LoopTheLoop #RollerCoaster. In 1901, he built this one in #ConeyIsland a… https://t.co/CsZcCvGsLR
15 hours 55 min ago

RT @ConeyIslandFun: It's #NationalRollerCoasterDay! Check out the thrilling rides in Coney Island🎢 Deno's @WonderWheelPark is offering FRE…
16 hours 9 min ago