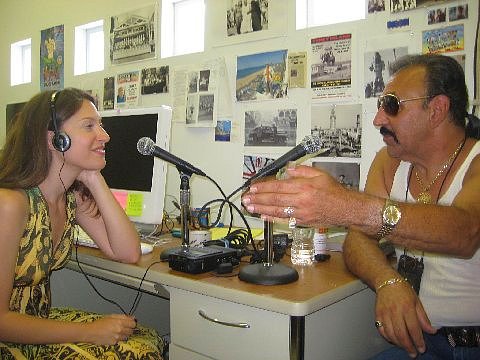 Ron Rossi, whose interview is part of the NEH on the Road's traveling Coney Island exhibit, being interviewed by Natalie Milbrodt for the Coney Island History Project Oral History Archive in 2010

We're proud to announce that selections from the Coney Island History Project's Oral History Archive will be part of the NEH on the Road exhibit "Coney Island: Visions of an American Dreamland" touring the U.S. from April 2017 through March 2022.

The NEH-funded exhibit, which first opened at the Wadsworth Atheneum Museum of Art and traveled to the Brooklyn Museum and San Diego Museum of Art, was adapted from its original format to make it available to smaller venues in communities large and small across the country. This new traveling exhibition from NEH on the Road will explore America's playground as a place and as an idea, examining its persistent presence in the American imagination.

Among the Coney Island History Project interviews featured in the exhibit are Beth Allen, who was an incubator baby in Dr. Martin Couney's sideshow in Luna Park; Joseph Albanese, who recalls a time when police didn't allow bathing suits on the boardwalk even though bathing suits were very modest; and Ron Rossi and Ronald Ruiz, who talk about their experiences riding the Parachute Jump, the Cyclone and Steeplechase Horse Race at Steeplechase Park. Clips from these interviews and several others will be running on a loop at one of the listening stations in the exhibition.

NEH on the Road is a special initiative of the National Endowment for the Humanities designed to create wider national access to the ideas, themes, and stories explored in major grant-funded NEH exhibitions. The program is funded by the NEH and run by Mid-America Arts Alliance, a non-profit regional arts organization located in Kansas City. If you would like to bring the Coney Island exhibit to a venue near you, check the NEH on the Road website for details.