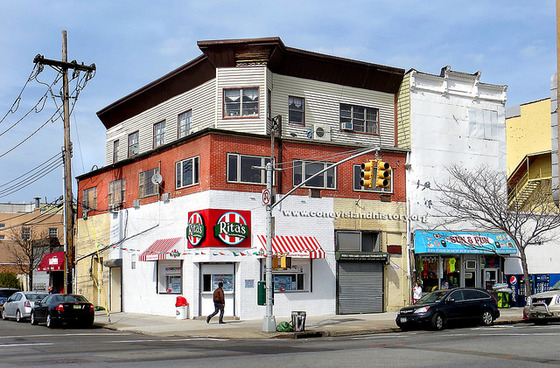 Coney Island fell victim to devastating urban renewal projects in the 1950s and 1960s. More than a thousand viable apartment buildings, homes, and businesses were condemned and demolished by the city during this terrible period. A few buildings were fortunate to escape the urban renewal onslaught. Some can be found in the West End, and a few are located in the amusement zone.

Most of the surviving structures in the amusement area are hidden behind altered facades, having been repurposed dozens of times during the last century. The fascinating histories of these structures are not known to the public or even to the buildings’ owners. I’ve created this survey of these buildings to show how the structures were transformed through the decades. This will be the first in a series. 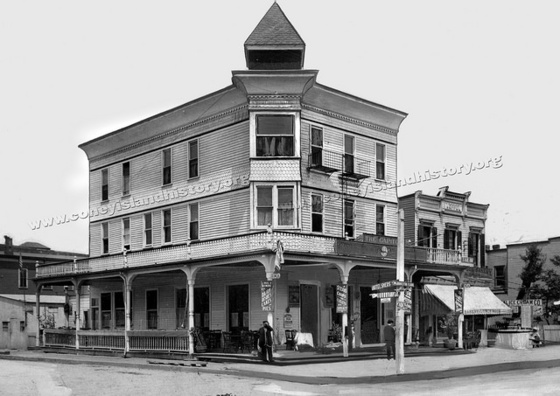 The Capitol Hotel and Korbel Bakery, West 15th Street and Surf Avenue circa 1899

We begin with two buildings located at Surf Avenue on West 15th Street. The three-story frame building on the corner, erected in the 1890s, was once the Capitol Hotel. Hand-lettered signs in the oldest photo point to the hotel’s horse stables on West 15th Street and list the hotel restaurant’s specialties: “Clams, Oysters, Chops and Roast Game.” Next to the signs is an advertisement for Steeplechase Park. The smaller two-story building to the right is Korbel’s Bakery. The bakery building was later raised and a third story added. 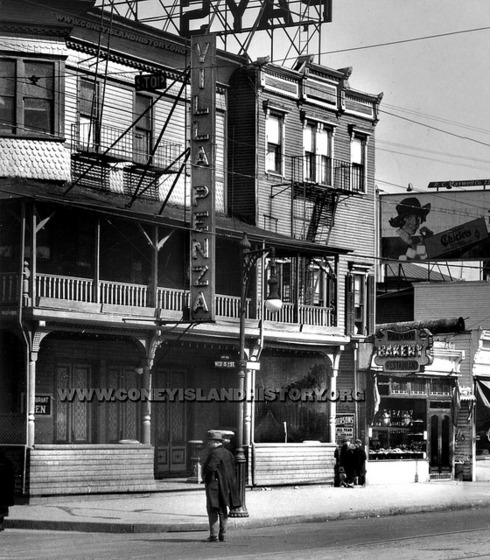 The Capitol and bakery buildings in 1921

In the 1920s photo, the Capitol has changed its name to Villa Penza, and the bakery has become the Parkway Bakery and Restaurant. Over the years the Capitol building has been occupied by a variety of tenants including the Draft Board and the Coney Island Chamber of Commerce. During the last two decades, the corner was home to an old-style Coney Island “social club” that recently relocated up the block to make way for Rita’s Italian Ices, a new business that opened in April 2014. Both buildings have undergone enormous changes during the last century, losing their covered wooden porches, shutters, and clapboard and shingle exteriors. Luckily, the buildings are viable and can still be identified by their existing rooftop cornices.

The Capitol Hotel and Korbel Bakery circa 1899 (left). The Capitol building in 2003 (right)

Thanks Charlie. Very interesting. I look forward to more installments.

Hey Charles, thanx for possibly elucidating something for me. Per my investigation re "dislocation of relatives, the Tilyou-family in the first

Charles Denson (Gads, I'm hoping you're alive, having seen posted some gravestone---worried too re my [distant] cousin in WSanibel)---only haave a minute or two to write. Had tried to trace relocations of ancestral-relatives in first-decade of 1900s, amid address often given being W.15th St. and Surf Ave., which was Villa Eileen (she died in 1895), but I see could've been instead Capitol Hotel, when Villa Eileen [across W.15th???] was usurped by George Tilyou's brood (long story leading to a elocated-ShootingGallery [1906] in First Steeplechace) ..... yours, EdT.

Does anyone know how or why this building was able to avoid being destroyed in urban renewal in 50's and 60's?

@joshdone1970 We're sorry your grandfather didn't get to tell you his stories. A few of our oral histories are with… https://t.co/Q9GMj71Koj
1 day 15 hours ago