The Astroland Rocket Has Landed Back Home In Coney Island! 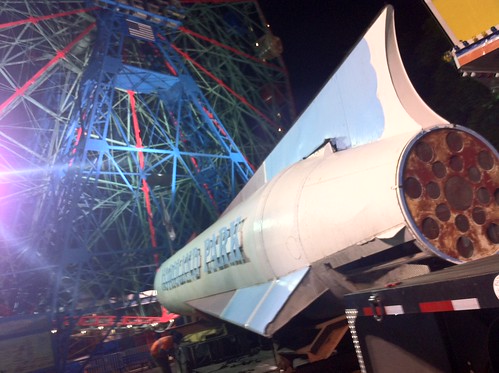 The famed Astroland Rocket Ship, one of the first and only surviving early amusement park “simulators,” returned home to Coney Island today after five years in storage at Staten Island's Homeport. It debuted in 1962 at Astroland Park as one of the first of the “imaginary” space voyage simulators constructed during the Space Race. The Rocket showed simulator films of “rocket rides” while the chassis “rocked” its viewers to outer space. The Ride, which has 26 seats, lasted about three minutes, the length of the film.

Originally built as the “Star Flyer,” the Astroland Rocket later sat atop the boardwalk restaurant Gregory and Paul’s. After Astroland closed in 2008, Carol and Jerry Albert, owners of Astroland Park, donated the Rocket to the City, which promised to make it a centerpiece of the new, revitalized amusement and entertainment district. 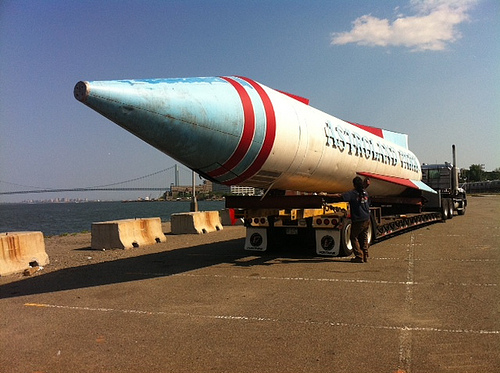 In November, the Coney Island History Project answered an RFP by the City’s Economic Development Corporation to bring the Astroland Rocket back to Coney Island. Our proposal was accepted and a few days ago we assumed ownership of the Rocket. Just after midnight, the Rocket began its journey home from Staten Island to a location near our exhibit center in Deno’s Wonder Wheel Park provided by the park’s owners, Steve and Dennis Vourderis. History Project co-founder and Astroland owner Carol Albert has paid the cost of moving the Rocket back to Coney Island.

“The Rocket has finally landed back home in Coney Island where it belongs. Thanks to the History Project and Carol Albert for making it happen,” said Steve Vourderis, co-owner of Deno’s Wonder Wheel Park, who with his wife Stacy spearheaded the park’s annual History Day. They hope to make the Rocket the centerpiece of this year’s celebration on August 9.

"The Coney Island History project has found a safe new place to house the Rocket at Wonder Wheel Park," said Carol Hill Albert, co-founder of the History Project with Jerry Albert, whose family owned and operated Astroland Park from 1962 until its closing in 2008. "Stacey and Steve Vouderis are the proud new caretakers of this classic ride which they will restore and will be used as an exhibition space." 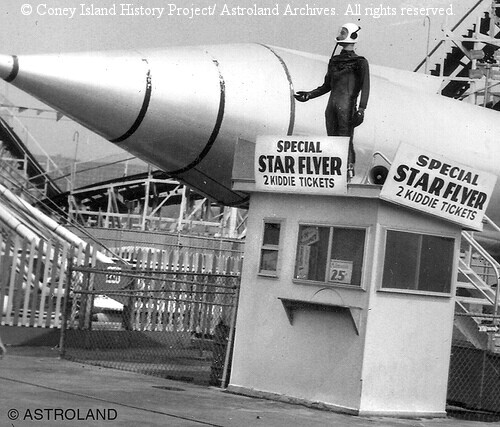 "Outer space simulators have played a prominent role in Coney's amusement history,” said Charles Denson, director of the Coney Island History Project and author of Coney Island: Lost and Found. “It began when Thompson and Dundy brought 'A Trip to the Moon' to Steeplechase Park in 1902 and culminated in 1962, at the height of the space race, with Astroland's Moon Rocket . The ride provided visitors with an exciting taste of intergalactic travel. The Astroland Rocket has now returned to a place of honor beside the landmark Wonder Wheel, where it will be restored as an exhibit showcasing Coney Island's fascination with space travel."

The restoration of the Rocket, which was seriously damaged during Superstorm Sandy, will be overseen by Steve Vourderis and it will become an educational exhibit designed by Charles Denson. The Rocket exhibit will cover the history of flight-themed attractions in Coney Island, encompassing science, amusements, photos and films.

When the Star Flyer Rocket debuted in 1962 as the first ride in Coney’s new space-age theme park, it was called the “Cape Canaveral Satellite Jet” (TIME), “The Spaceship Auditorium” (Billboard) and the “Cannonball Adderley Rocket” in anticipation of Adderly dedicating the rocket for Astroland’s official opening on July 1, 1962. The rocket was rechristened the “Astroland Moon Rocket” in 1963. 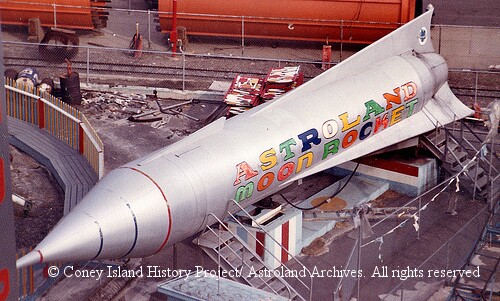 has it been repainted or still the same?

I just had to run and see it for myself, even just seeing the nose cone from 12 street was exciting, cant wait to see the whole thing up close.