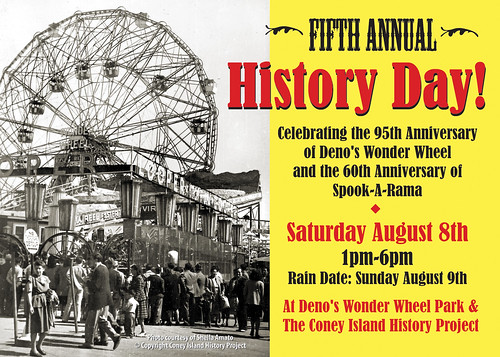 Enjoy live music, dancing and history at the 5th Annual History Day at Deno's Wonder Wheel Park, Coney Island's oldest amusement park, and the Coney Island History Project. This year's festivities are a celebration of the 95th anniversary of the 1920 landmark Deno's Wonder Wheel and the 60th anniversary of the 1955 Spook-A-Rama, Coney's last classic dark ride. The free event will be held from 1-6pm on Saturday, August 8. The rain date is August 9.

Pick up a schedule and souvenir map of the historic attractions in Deno’s Wonder Wheel Park at locations throughout the park and at the Coney Island History Project. PLUS see our Stilt Walker for a 95th Anniversary Balloon!

History Day activities will be at the following locations:

Brooklyn Swings performing and showing us the steps to popular dances of the 1920s and 1950s. Dance the Charleston and the Bop in a public salute to the Wonder Wheel and Spook-A-Rama! 1:30-3:30pm

Magician Bob Yorburg, performing "Professor Phineas Feelgood's World of Magic" and presenting a band organ tribute to the Wonder Wheel with friends from the Carousel Organ Association of America 4-5pm

Be part of living history! Tell your story! The History Project will record visitors who have Coney Island stories for its Oral History Archive. View historic artifacts, photographs, maps, ephemera and films of Coney Island's colorful past at the History Project's exhibit center. Visitors are invited to take free souvenir photos with a 'Skully' from Spookhouse and Spook-A-Rama and an original Steeplechase horse from the legendary ride that gave Steeplechase park its name. 1-7pm

Walk inside the iconic 1960s Astroland Rocket, which was brought home to Coney Island last summer and has a new home in Wonder Wheel Park! 1-6pm

Plus: The first 100 people who ride the Wonder Wheel will receive a Limited Edition Commemorative Button as a gift. Dress in 1920s garb and get one Free Ride on the Wheel! The Wonder Wheel opens at 12pm

One of the 1000 names on today's NYT front page devoted to people who died from Covid-19 is "Jennifer Robin Arnold,… https://t.co/lFqvQOLVUe
12 hours 31 min ago
RT @ChristoSpinelli: Happy 100th Birthday to a true Brooklyn original- @WonderWheelPark which has appeared in more of my paintings and phot…
1 day 7 hours ago
@ParachuteArts @WonderWheelPark Thank you, @ParachuteArts ♥️🎡
1 day 7 hours ago