Coney’s Boardwalk Should Be A Landmark 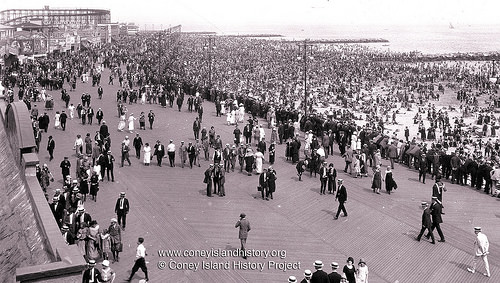 Last December Councilmembers Mark Treyger and Chaim M. Deutsch sent a petition to the Landmarks Preservation Commission asking that the Coney Island Boardwalk be declared a scenic landmark. On December 17 the council members received a condescending and dismissive rejection letter from LPC Director of Research Mary Beth Betts. The letter outlined the reasons for refusal to grant Scenic Landmark status.

The commission’s response to Councilmember Treyger is troubling on many levels, the first being that the contents of the letter were lifted from a 2012 letter written by then LPC Chairman and Bloomberg appointee Robert Tierney. In addition to the “form letter” being an inappropriate response to the two elected officials, all of the reasons stated for the refusal do not apply to the Boardwalk.

Ms. Betts gave the following reasons for denying scenic landmark status: “The boardwalk was substantially altered by Robert Moses in 1939-41 from its original location and configuration. [And was] at this time straightened and extended east. The planks of the Boardwalk have been replaced numerous times over the years. . .”

To understand how ludicrous this reasoning is, one has to look at Ocean Parkway, a local Scenic Landmark granted landmark status in 1975. Ocean Parkway was originally a dirt road lighted by gas lamps. By the time it became a Scenic Landmark, the parkway had been resurfaced with asphalt, had its bridle path removed, and had been significantly altered when its northern end was cut off and put below grade as the entrance to the Prospect Expressway. Despite these alterations, Ocean Parkway still became a landmark. Therefore, a surfacing change and alterations should not affect the landmark status of the Boardwalk. 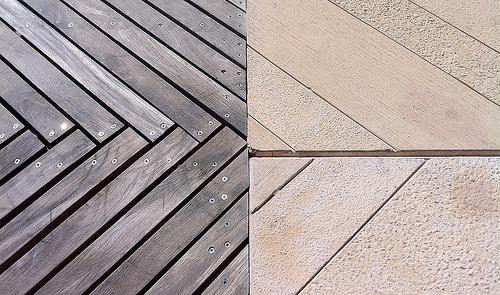 The LPC’s statement that “the Boardwalk was substantially altered” and moved from its original location is also untrue. Only a five-block section of the 2.7-mile structure was moved, and the new section was built to the original specifications.

Perhaps the most shocking reason for denying landmark status was the staff’s incredulous statement that the Boardwalk has no historical or cultural significance. “In the opinion of the staff,” they pompously declare, “the most important period of significance in the history of Coney Island as a seaside resort pre-dates the construction of the boardwalk.”

While the staff’s inaccurate reasoning about “alterations and surfaces” can be attributed to sloppy research, their statement that the 1920s were not a “significant” period in Coney Island’s history shows an astounding display of ignorance. For some unknown reason, the staff has decided to downplay Coney Island’s important post-World War I history. And this despite the fact that nearly all of Coney’s designated landmarks are from that period.

During the 1920s, following the closure of the race tracks and elite hotels, Coney Island became the “People’s Playground.” The shorefront was expanded and reclaimed by the city and opened to the public, and the Boardwalk was opened and became the island’s Main Street, celebrated in legend and song. New theaters and hotels were constructed, public transit brought millions to the shore, and the Boardwalk, free to all, was the centerpiece. It was the symbol of Coney Island’s resurrection. Even from an engineering viewpoint, the Boardwalk has great importance. The structure was built in the ocean surf and the beach built around it, the first time hydraulic pumping had been used to create an artificial beach.

The following are the Landmark Commission’s stated criteria for a scenic landmark:

To become a scenic landmark, an outdoor site must be: At least 30 years old and have "a special character or special historical or aesthetic interest or value as part of the development, heritage, or cultural characteristics of the City, state, or nation" Any landscape feature or aggregate of landscape features

The Boardwalk meets every one of these requirements. It’s certainly one of the most scenic locations in New York City. The historic battle to reclaim the shorefront it stands on, the engineering breakthroughs enabled its construction, and the important role it plays in the lives of both visitors and residents are indisputable. In denying scenic landmark status to the Boardwalk, the landmarks commission seems to be failing in both mission and competence.

Granting landmark status can be a very political and controversial subject. We are all aware of that. But sending public officials a hackneyed, ill-informed retread opinion is insulting and discourteous. Commissioner Srinivasan and her research staff should be ashamed. 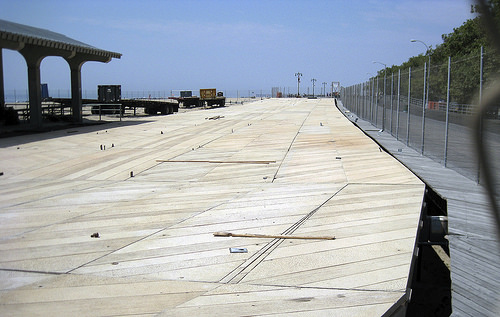 Coney Island’s Boardwalk is under attack on many fronts. The recent decision to create a concrete Boardwalk will turn out to be a tremendous failure. Individual wooden boards can be replaced, but the massive concrete panels being installed cannot be removed and will have to be patched as the surface cracks from weathering over the next few decades. This pockmarked concrete surface will create hazards much greater than the ones now experienced by Boardwalk strollers and will be harder to repair. Alternatives to concrete must be explored before it is too late. Coney Island’s iconic wooden Boardwalk must be protected, restored, and preserved for future generations.

To take away the boardwalk,is cutting the arm to the body of Coney Island. We can not let this happen. If so it it is an atrocity. Stop taking the essence of Coney Island away. Thank you .

Unfortunately, LPC staff and researchers take their marching orders from the Chair. Both Tierney and the new Chair Srinivasan have no formal background in preservation, and, as a result, many of their decisions have been exceedingly arbitrary and based solely on the discretion of local politicians or real estate developers. At this point, if you want to save the Coney Island board walk, you're going to need to find a good attorney and file a lawsuit.