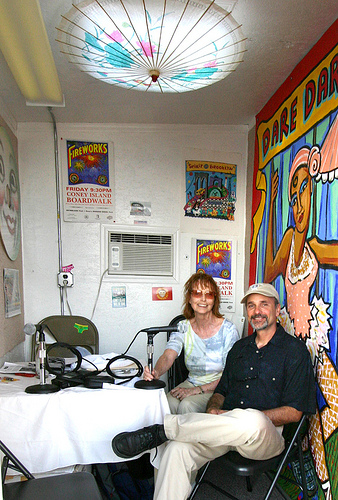 A New Look and A New Project

Eleven years ago Astroland owner Carol Albert and author Charles Denson founded the Coney Island History Project as an oral history program whose mission was to record Coney Island in living memory. Little did we know that we would be capturing the last days of an important era in Coney history.

Since our founding, Coney Island has undergone a dramatic revival and been transformed. During the last tumultuous decade we were able to record important oral histories, including those of the last members of Coney's pioneer families as well as an extensive cast of characters who contributed to Coney's illustrious past. Some of the subjects, such as Matt Kennedy and Joe Rollino, were centenarians who vividly recalled and shared a hundred years of memories. Many other subjects passed away during the last decade but not before sharing their fascinating stories with us.

With the launch of our new website we strengthen our mission of recording and archiving oral histories. The improved format and mobile-friendly web design provide a quicker and easier way to navigate and access our extensive library of archival materials and important information regarding Coney Island and our public programs. The expanded architecture allows us to add to the archive hundreds of interviews and unseen photographs, maps, and ephemera. New technology enables us to clean and restore older recordings, including two decades of recordings made by Charles Denson for his book Coney Island: Lost and Found. We can now begin sharing our vast archive of materials.

Also highlighted is our latest project: Immigrant Narratives of Southern Brooklyn. This project is an oral history initiative that records interviews with immigrants in both English and other languages in the Southern Brooklyn neighborhoods of Coney Island, Gravesend, and Bensonhurst. You can listen to the first oral histories from the series with New Yorkers who emigrated from Hong Kong, Japan, Vietnam, Pakistan, Cyprus, Turkey, Russia, Georgia, Poland and Mexico. The first interviews were conducted in English, Russian, Cantonese and Turkish. This program is part of the Cultural Immigrant Initiative supported, in part, by the New York City Department of Cultural Affairs in partnership with the City Council, and New York City Councilman Mark Treyger.

Thanks to CM @MarkTreyger718 for his continued efforts to preserve the #ConeyIsland #Boardwalk! His bill would bar… https://t.co/r7oF2kCSLy
9 hours 44 min ago

RT @Nurelah: Not everyone was paying attention at this morning's staff meeting at Coney Island 😊❤️❤️❤️❤️❤️ https://t.co/GKwuAoKcGc
1 day 3 hours ago