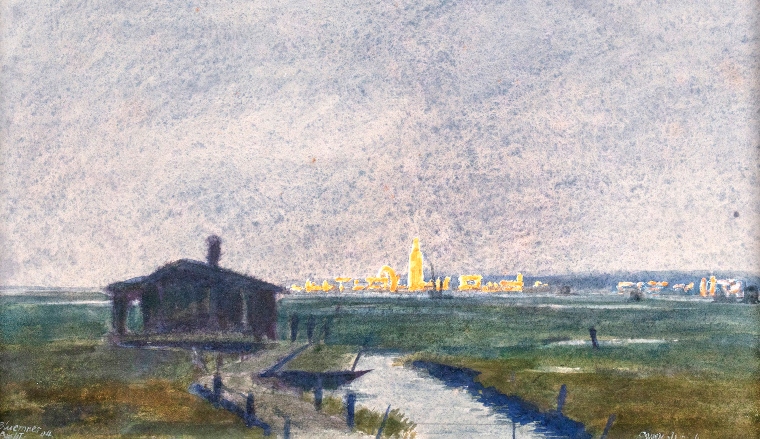 Last June, Wendy Ikemoto, Curator of American Art at the New-York Historical Society, asked me to write a short descriptive label for a painting in a new exhibition at the Society. When I saw the image she sent me, I was shocked. The painting was beautiful, but also one of the saddest images I’d ever seen. The timing of the request was amazingly serendipitous. In 1904 the painter Oscar Bluemner captured the natural world of Coney Island Creek shortly before it was destroyed by development of the "World’s Playground." Exhibiting this painting could not be more timely, as history is now repeating itself.

Right now, Coney Island Creek’s most vulnerable, recovering shoreline, a tiny cove located at Kaiser Park, is being callously destroyed and degraded by a dubious ferry project. It’s as if the painting appeared as a cry for help, shouting from the past, asking us to save a last remnant of Coney Island’s natural world.

The city’s ferry dock, currently under construction, will end a half century of environmental improvements at Kaiser Park. Future operation of the ferry at this site will eliminate public access, degrade water quality, destroy natural habitat, and end educational and recreational use of the shoreline. City officials have pushed this project through by using a flawed and false narrative. It did not have to be this way.

Bluemner’s painting provides us with a warning. It depicts the "nursery of the sea,” thousands of acres of vibrant salt marsh environment shortly before it was filled and lost forever. The caption I wrote cannot adequately describe the sense of loss I felt when I first saw the painting:

This sublime view of Coney Island Creek’s lost marshland is poignant. Shortly after this scene was painted, the gaudy “magnificent artifice” rising in the background would overwhelm and replace the natural world. The true essence of Coney Island has been captured here beautifully but sadly. I still spend time on Coney Island Creek searching for hidden remnants of this scene that can be resurrected and appreciated. -- Charles Denson

NEW in the Coney Island History Project #OralHistory Archive: Ansen Tang, ED of the United Chinese Association of B… https://t.co/c9Z6o7HM5T
6 days 17 hours ago