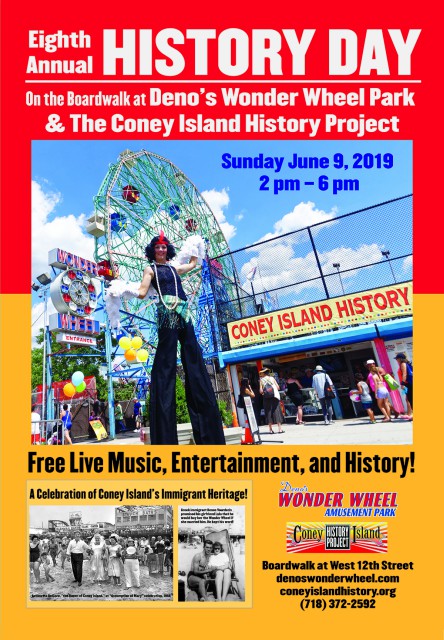 Enjoy Free Live Music, Entertainment and History, including performances by musicians and dancers representing the traditional culture of countries from which people have emigrated to Coney Island:

4:15PM: Jenny Luna: Songs in the Turkish and Rumeli traditions 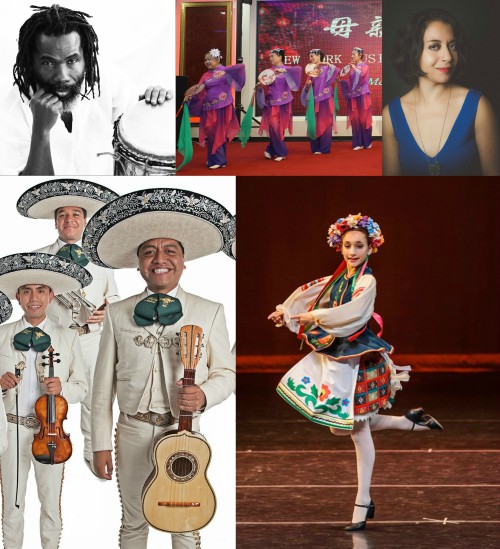 "I love Coney Island," said Deno John Vourderis, a third generation member of the family that owns and operates the world famous Deno's Wonder Wheel. "We are what we have always been, a place where all people come to play. And my favorite part about working here is seeing people who half a world away are at war but in Coney Island stand next to each other in line, their children smiling at each other in mutual excitement before stepping into a ride together."

"For more than a century, Coney Island served as the true historic 'melting pot' for New York City's immigrant population," said Charles Denson, author of Coney Island: Lost and Found and director of the Coney Island History Project. "It remains a place of great diversity, where people of small means enjoy an affordable day of free recreation on the beach and Boardwalk. Coney Island continues to be a destination for immigrants, the place to assimilate with people of all nationalities. It's where they finally find true freedom and become Americans."

About Deno's Wonder Wheel Amusement Park
Built in 1920, the NYC landmark Deno's Wonder Wheel turned 99 on Memorial Day and will celebrate its 100th birthday in 2020. Deno's Wonder Wheel Amusement Park founder Denos D. Vourderis, the 8th of 22 children, immigrated to the United States at age 14 to pursue the American Dream. He was born in Greece in 1920, the same year as the Wonder Wheel that he would buy in 1983 as a wedding ring for his wife Lula, restore to its original state, and build his amusement park around. The park now features 21 rides as well as arcades, games, Famiglia Pizzeria and an old fashioned Sweet Shoppe, and proudly hosts the Coney Island History Project. It is owned and operated by Dennis and Steve Vourderis and their sons, the second and third generations of the Vourderis family. West 12th Street, between Surf Avenue and the Boardwalk, was co-named Denos D. Vourderis Place in 2001.

About the Coney Island History Project
Founded in 2004 by Carol Hill Albert and Jerome Albert in honor of Dewey Albert, creator of Astroland Park, the Coney Island History Project is a not-for-profit organization that aims to increase awareness of Coney Island's legendary past and to encourage appreciation of the Coney Island neighborhood of today. Admission is free of charge to our exhibition center located on West 12th Street at the entrance to Deno's Wonder Wheel Park. Hours are 1-7 PM on weekends and holidays from Memorial Day Weekend through Labor Day. This season's special exhibit is "Salvation by the Sea: Coney Island's 19th Century Fresh Air Cure and Immigrant Aid Societies," curated by executive director Charles Denson. Our multilingual offerings include a brochure in 10 languages, English and Chinese language walking tours, and oral history interviews recorded in several languages.