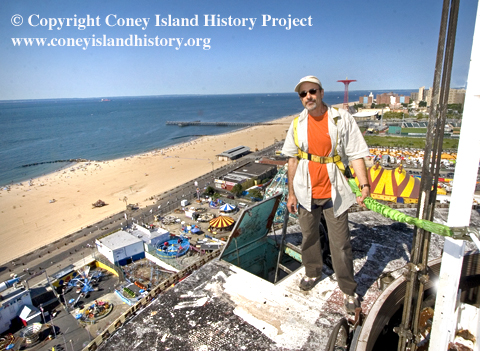 Coney Island’s Astrotower was much more than an amusement ride. It served as a symbol of hope. To those of us living in Coney Island in the early 1960s, the tower represented the future of Coney Island, a sign that the neighborhood would survive the city’s urban renewal schemes.

At that time, most of the neighborhood was slated for demolition, and former amusement sites were being converted to housing. Venerable Steeplechase Park closed down the same year that the tower went up. The Albert family took a huge personal risk when they built Astroland and the Astrotower. When the tower was completed in 1964, Coney Island had a bright new landmark proclaiming that the amusement zone would not be wiped away.

The tower was never a thrill ride. It provided an overview, an aerial perspective on Coney Island. The Astrotower was not an ornate or baroque tower like the ones at Dreamland and the old Luna. It was a utilitarian structure, much like Coney’s first tall attraction, the 300-foot Iron Tower, built in the 1870s to resemble a giant oil rig. The Astrotower had idiosyncrasies: it liked to sing and dance, to sway in the wind as the cables hummed a mournful tune. This proved to be its undoing.

Back in the 1970s, when the iconic Parachute Jump was a rusting abandoned relic, there were constant calls for its demolition. But it survived its critics and is now restored as the Eiffel Tower of Brooklyn. The Astrotower would not be so lucky.

When the Coney Island History Project exhibit center opened below the Cyclone in 2007, I got to know the Astrotower’s longtime caretaker, Frank Pugliesi. On Sunday mornings I’d accompany him to the top while he did the weekly maintenance. Frank was an elevator mechanic, and he kept the tower in top shape. The motor room atop the tower looked like new, always clean and freshly painted in bright colors.

Toward the end, some saw the Astrotower as a relic, a leftover that did not belong in the “new” Coney Island. But the truth is that there might not have been a Coney Island for the latest regime to “rescue” if not for the enormous personal investment made by the Albert family in the early 1960s. The tower was a lasting reminder of the optimism that investment represented.

There was a recent plan to decorate the tower with pinwheels and lights, in sync with the new lighting on the Parachute Jump. It would have been beautifully repurposed. But it was not to be, and the Astrotower joins Coney’s towers of the past, a page in history. The tower went out in a dramatic fashion on the Fourth of July weekend 2013 in a fog of hysteria, false rumors, and conflicting reports. It was condemned and cut into pieces and unceremoniously hauled off to a junkyard. Was Hurricane Sandy to blame, or the removal of the observation car and counterweights that always kept it balanced? Or was the tower just trying to escape, its mission accomplished?

The Astrotower cannot be replaced, but another symbol of optimism is waiting in the wings. Now is the time to bring back the Astroland Rocket! --- Charles Denson

Community Board 13 Meeting about the City's plan to land its ferry at Coney Island Creek in Kaiser Park. Wednesday,… https://t.co/nbNGxuJejM
2 days 15 hours ago

It's #knish time at #PaulsDaughter on the Coney Island Boardwalk! In this clip from Ep 10 of our #oralhistory… https://t.co/gjKkMVo7t5
3 days 18 hours ago