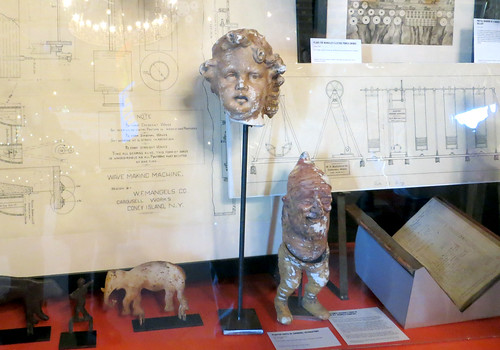 Objects on loan from the Coney Island History Project

William F. Mangels, the "Wizard of Eighth Street," was a pioneering ride inventor and amusement manufacturer who was among the first inductees into the Coney Island History Project's Hall of Fame. This fall, Mangels and his work is being celebrated with a special exhibit at the Chapel at Green-Wood Cemetery, where he is interred. "William F. Mangels: Amusing the Masses on Coney Island and Beyond" features a vintage shooting gallery, ride cars, and carousel artifacts, as well as an array of posters, photographs, videos and memorabilia on loan from public and private collections.

Coney Island History Project director Charles Denson was a consultant for the exhibit and loaned artifacts from his archive. On September 6, a group tour on the Green-Wood trolley organized by the Green-Wood Historic Fund and conducted by Charles Denson visited the Coney Island History Project exhibit center, the Mangels' Fire Engine and Pony Cart rides in Deno's Wonder Wheel Park, and other sites associated with Mangels. His former shop building on West Eighth Street is now an office of the Department of Motor Vehicles. 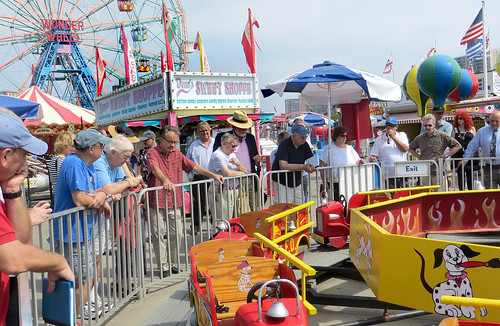 According to Mangels' bio on our Hall of Fame page, he immigrated from Germany in 1883 at age sixteen and by 1886 had a small machine shop in Coney Island where he made cast-iron targets for shooting galleries. Mangels then began studying patents and inventing mechanisms for rides. In 1901 he patented an improved version of the overhead jumping-horse suspension for carousels, the standard mechanism still used on most carousels today. He also invented rides such as the Tickler and the Whip and built the mechanisms for countless roller coasters and scenic railways.

The Mangels exhibit is on view daily from 12-6pm at Green-Wood Chapel through October 26. Admission is $5.00. 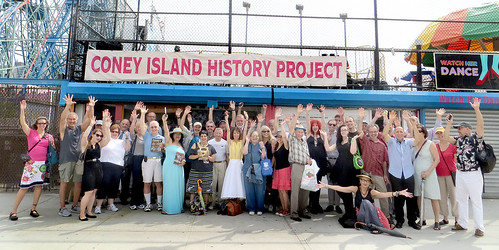 RT @MarkTreyger718: Stopped by today to check out the beautiful mural completed by the scholars of @288Eagles in Coney Island in partnershi…
1 day 13 hours ago
RT @WonderWheelPark: New view from Deno's Wonder Wheel! Seeing #phoenixrising, #ConeyIsland's newest ride, while riding Coney's oldest ride…
1 day 13 hours ago
#FlashbackFriday circa 1925 boardwalk scene of Childs Restaurant and Washington Baths on the right. Welcome to… https://t.co/sLS7fIWY4G
3 days 14 hours ago