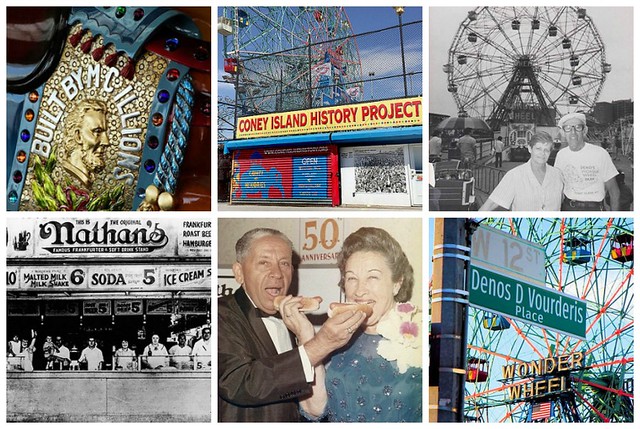 On Saturday, April 23, the Coney Island History Project is offering a new walking tour free of charge as part of Immigrant Heritage Week. Coordinated by the Mayor's Office of Immigrant Affairs, the annual citywide program of events celebrates the history, traditions and contributions of NYC's diverse immigrant communities. IHW begins on April 17th in recognition of the date in 1907 when more immigrants entered the U.S. through Ellis Island than any other date in history. The theme for Immigrant Heritage Week 2016 is "From Many, Making NYC One."

The Immigrant Heritage Tour of Coney Island is the newest in the Coney Island History Project's walking tour program. The 1-1/2 hour, wheelchair accessible tour explores the contributions of immigrants to the history and development of "The Playground of the World."

"Coney Island has traditionally been a place where immigrants who wanted to start a business could start small and work their way up," says Charles Denson, director of the Coney Island History Project. "A person of small means with no experience or capital could lease a stall on the Bowery and open a game concession with nothing more than a few baseballs and milk bottles. Coney was also the place where immigrant families could escape steaming tenements, get fresh air, bathe in the ocean and assimilate with people of all nationalities. It's where they finally found true freedom and became Americans."

Among the stops on the walking tour and the stories of struggle, success and achievement are Nathan's Famous, founded in 1916 by Polish immigrant Nathan Handwerker; Deno's Wonder Wheel Amusement Park, where the landmark 1920 Wonder Wheel was purchased by Greek immigrant Denos D. Vourderis as a wedding ring for his wife; and the B&B Carousell, created in 1919 by German and Russian immigrants and now Coney's last hand-carved wooden carousel.

The tour will also go by stores and attractions operated by immigrants from countries such as China, Mexico and Jamaica who have recorded their stories for the Coney Island History Project's Oral History Archive. The Immigrant Heritage Tour will be led by Amanda Deutch and Tricia Vita, who facilitate and record oral histories for the Coney Island History Project.

The April 23rd tour is offered at 12pm and 3pm. Tickets are free but must be reserved online as capacity is limited. If you can't make it to Immigrant Heritage Week, starting in June, the Immigrant Heritage Tour of Coney Island will be added to the schedule of our weekend walking tours, which cost $20. Advance ticketing is available via our online reservation page. If you have a question or would like to schedule a group visit, email events@coneyislandhistory.org.

Our unique tours are based on History Project Director Charles Denson's award-winning book Coney Island: Lost and Found, the interviews from our Oral History Archive, and other primary sources.

On Thursday, May 26, Mr. Denson will give a slide talk at the Coney Island Library, 1901 Mermaid Avenue at West 19th Street. The talk begins at 6:30pm and is free to the public.

"My talk tells the story of several immigrant families who started small in Coney Island and then went on to become enormously successful due to hard work and perseverance," says Charles Denson. "Immigrants like Nathan Handwerker of Nathan's Famous and Denos Vourderis of the Wonder Wheel started with nothing, built successful businesses, and helped to shape Coney Island. Immigrant artisans Marcus Illions and William Mangels brought craftsmanship and artistic experience from their native countries and built factories in Coney Island that produced great works of folk art in the form of carousels and other amusements. Recent immigrants continue to play an important role in the community."

The Coney Island History Project, founded in 2004, is a 501(c)(3) not-for-profit organization that aims to increase awareness of Coney Island's legendary and colorful past and to encourage appreciation of the Coney Island neighborhood of today. Our mission is to record, archive and share oral history interviews; provide access to historical artifacts and documentary material through educational exhibits, events and a website; and honor community leaders and amusement pioneers through our Coney Island Hall of Fame.

#127years ago today, June 15, 1894, was the opening ceremony of Ocean Parkway's bike path, the first in the US 📷She… https://t.co/CnN8G4t3Hh
15 hours 59 min ago
RT @FrontusforNY: Earlier today we had a successful community cleanup on Coney Island. We picked up hundreds of cigarette butts, wrappers,…
1 day 16 hours ago
RT @lotuswinnielee: Closeup of a beautiful and adorable Mute Swan Cygnet on Saturday 6/5/2021. There are 3 cygnets for the pair of Mute Swa…
1 day 16 hours ago