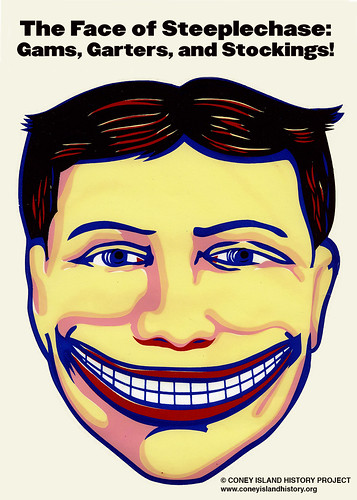 The Coney Island History Project's first special exhibit of the season, opening on Memorial Day Weekend, will be "The Face of Steeplechase Park: Gams, Garters, and Stockings!" A look behind the smiling face of Steeplechase Park features rare photographs and artwork from the park's opening to its demolition, 1897-1966.

Tilyou, an expert at crowd psychology, began his career as a young boy selling bottles of sand to visitors at his father's beachfront bathhouse and restaurant during the 1860s. Decades later, he created Steeplechase Park, Coney's most successful and long-lived amusement park.

The park's quirky trademark was the grinning "Funny Face," an enigmatic symbol of the park's underlying theme of merriment, hilarity, and, most importantly, sex. The much-imitated face underwent numerous revisions during the park's run. Sometimes it was a gleeful, maniacal visage; at other times, it appeared as inscrutable as the Mona Lisa. Was the face a mask for Tilyou or did it represent his true personality? This exhibit examines the many variations through the decades.

Highbrow and lowbrow culture existed simultaneously at Steeplechase. The 15-acre park was an enclosed wonderland composed of classical architecture and formal gardens tended by brightly uniformed employees. But underlying it was a theme of sex and titillation, a beguilingly Victorian version of sexuality and romance expressed by a leg or petticoat exposed by a tumble or a hidden jet of air. The experience was simultaneously innocent and kinky. 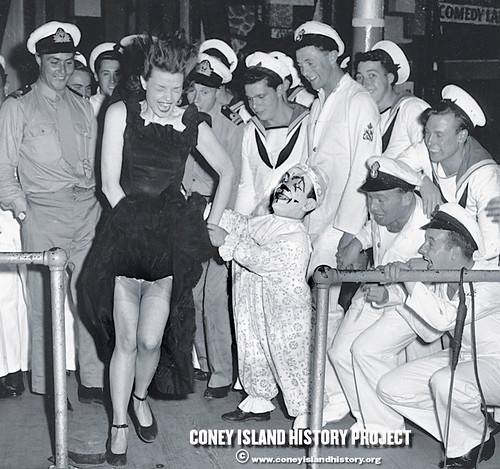 Tilyou forced the visitor to be part of the show. His main attractions were designed to offer the public a combination of voyeurism and exhibitionism, to put them onstage and make them part of the act. The Insanitorium (originally called the Blow Hole Theater), the Barrel of Love, the Human Roulette Wheel, and the Bounding Billows were contraptions created to break down inhibitions by luring visitors into disorienting traps where anyone "could end up in an intimate arm-and-leg tangle with complete strangers."

Looking back, 50 years after the park closed, it's difficult to believe that something like the Blow Hole Theater, with its hallucinatory stage set, electric paddle-wielding clown, and skirt-lifting air grates, lasted as long as it did. Many of the park's attractions could not exist in today's litigious, politically correct culture. The only survivor of this bizarre period remains the iconic Funny Face, the symbol of an innocent and repressed world.

"The Face of Steeplechase" is curated by Coney Island History Project director Charles Denson. The exhibit is on view from May 24 through September 1 (Labor Day), 2014. The Coney Island History Project's exhibition center is located under Deno's Wonder Wheel Park's iconic entrance sign at 3059 West 12th Street, just a few steps off the Boardwalk. View historic artifacts, photographs, maps, ephemera and films of Coney Island's colorful past and special exhibits. Our popular Steeplechase Horse from the ride that gave Steeplechase Park its name is on display along with Spook-A-Rama's Cyclops from Deno's Wonder Wheel Park, hand-painted figures from Astroland's Musik Express, a Mangels Fairy Whip Car made in Coney Island in the early 1900s, and vintage signs and game pieces.

The exhibit center is open Saturdays, Sundays and holidays from Memorial Day Weekend through Labor Day, from 12 noon till 6pm. Admission is free of charge. 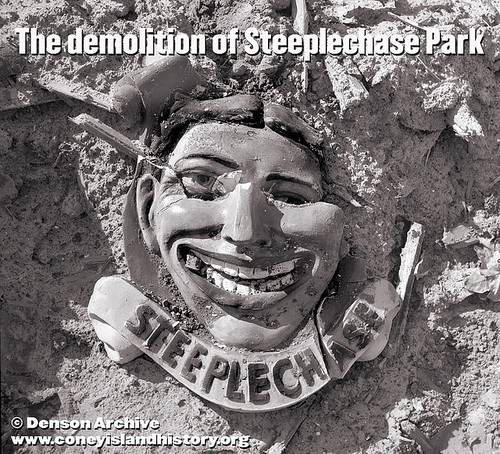 "Park Funny Face" was my grandfather Edward J. Tilyou (n.b. the [half-Irish] broad-jaw, this relationship---he and my grandmother "broke up" early-on, there being hint that a Finnish-rooted servant-girl being within the [small and humble] family-home MAY "have played a role"---obscured by my having restored to surname s older-form, i.e. amid Tilyou much "a business-name", per it having been first/most used by Rev.War-vet Peter V. Tillou [the elder], per HIS having been, in full, Tiebout-Tillou, i.e. his Mom, Vincent Tillou s wife, was [nee] Ann/Nancy Tiebout (she died ca. 1760 "birthing" her third son [he also expired] and is buried [in unmarked grave] at Trinity Churchyard Cemetery, that then the community-church)...... EdTillou

Tearing down the Tillie face.

Granted the face at Steeplechase was old and in need of repair. But in 1966 Trump and his older brother tore it down to make room for apartments Trump NEVER built. He tore down a relic that many loved and that is when his unpopularity began. 50 years ago!

NEW in the Coney Island History Project #OralHistory Archive: Ansen Tang, ED of the United Chinese Association of B… https://t.co/c9Z6o7HM5T
6 days 18 hours ago