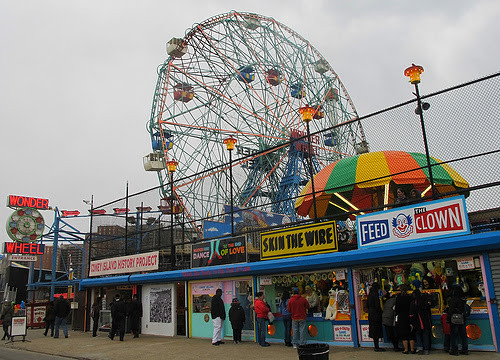 March 26 will be the official opening day for Coney Island's rides and attractions. The celebration starts at 11:00AM on the Boardwalk with the annual tradition of the Blessing of the Rides at Deno's Wonder Wheel Park. This year's ceremony is dedicated to Pastor Debbe Santiago of Coney Island's Salt and Sea Mission, who originated the event with Denos D. Vourderis 31 years ago and passed away last month. Deno's Wonder Wheel is marking its 96th season with a free ride for the first 96 riders. At the Cyclone, where the first 100 on line ride for free, the annual Egg Cream Christening of the roller coaster's front car is at 11:45AM. The 1920 Wonder Wheel and the 1927 Cyclone are official New York City landmarks.

Our first special exhibit of the 2016 season, opening on Memorial Day Weekend, will be "The 50th Anniversary of Fred Trump's Demolition of the Steeplechase Pavilion." A half century ago Coney's most beautiful and imposing structure was demolished by developer Fred Trump, Donald Trump's father. This exhibit examines in photos, ephemera, and oral history, the importance of the pavilion and the memories of local personalities who dealt with Trump before and after the tragic demolition of a Coney Island landmark. During the last decade History Project director Charles Denson interviewed many of the players involved in the loss of Steeplechase and the exhibit reveals many little known facts.

On Easter Weekend at the Coney Island History Project, visitors may take free souvenir photos with an original Steeplechase horse from the legendary ride that gave Steeplechase Park its name and "Skully," a figure from Coney Island's classic Spookhouse and Spook-A-Rama dark rides. Among the treasures on display at the Coney Island History Project's exhibit center this season is Coney Island's oldest surviving artifact. The 1823 wooden Toll House sign dates back to the days when the toll for a horse and rider to "the Island" was 5 cents! The current special exhibit on view is "Coney Island Stereoviews: Seeing Double at the Seashore, 1860-1920."

Located on West 12th Street at the entrance to Deno's Wonder Wheel Park, just a few steps off the Boardwalk, the Coney Island History Project is open free of charge on weekends and holidays from Memorial Day Weekend through Labor Day from 1-7pm, We will also be open on March 27, Easter Sunday, from 1-6pm. The Coney Island History Project is open year round for private group visits and our weekend walking tours. 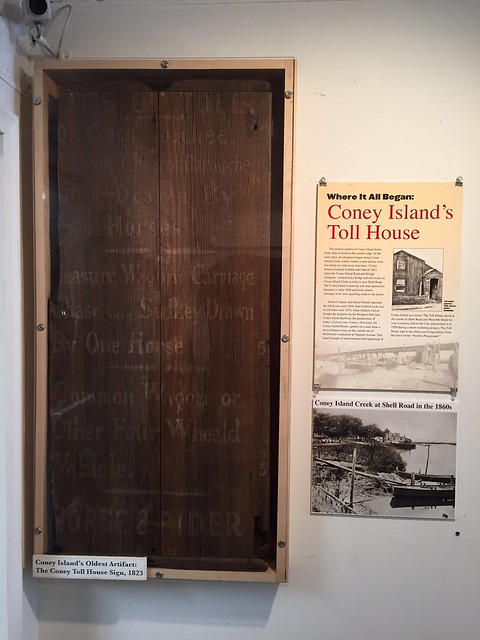 Times flies when you're having fun in Coney Island 🎢 #Throwback to the Cyclone Roller Coaster's #50th birthday in 1… https://t.co/7lsEjPFDcp
4 days 9 hours ago