May 22: Greek Music and Dance in Honor of Denos and Lula Vourderis 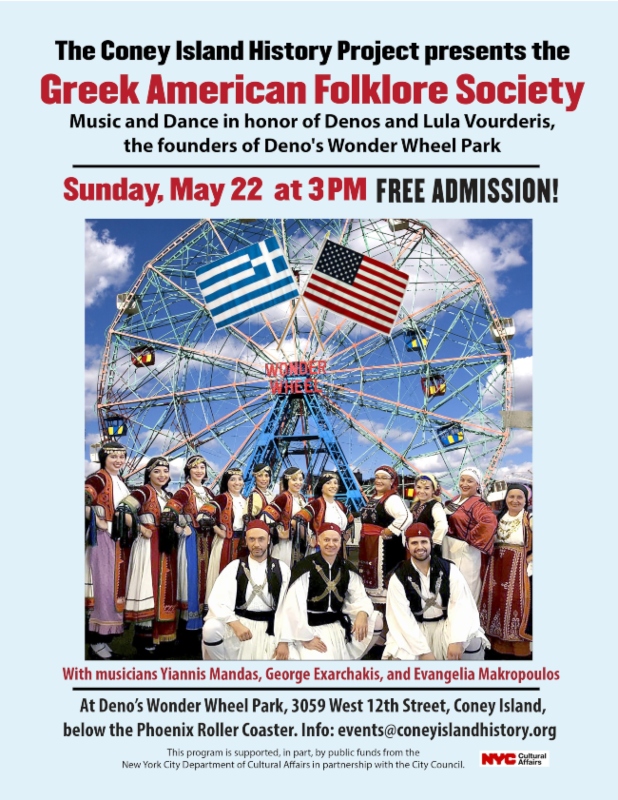 Save the Date! On Sunday, May 22, the Coney Island History Project presents a performance of Greek music and dance in honor of Denos and Lula Vourderis, the founders of Deno's Wonder Wheel Amusement Park. Dancers from the Greek American Folklore Society will perform dances from Crete, Pontos, and more. Then the audience will be invited to learn a few steps and join in. The event also features live music by Yiannis Mandas (Cretan Lyra), George Exarchakis (Cretan Laouto) and Evangelia Makropoulos (Daouli). The free performance will be at Deno's Wonder Wheel Park, 3059 West 12th Street in Coney Island, below the park's Phoenix roller coaster. The event starts at 3PM and will run for about 90 minutes.

“We originally planned this performance of Greek heritage two years ago to celebrate the Wonder Wheel’s 100th birthday,” said Charles Denson, director of the Coney Island History Project. “It’s great to finally be able to honor the Wheel and the Vourderis family for their historic commitment to Coney Island.” Denson’s book, Coney Island’s Wonder Wheel Park, tells how Denos Vourderis, who was born in Greece in 1920, the same year the Wonder Wheel was constructed, came to the purchase the ride and build his family’s amusement park around it. In 1948, he was a hot-dog vendor in New York when he promised his girlfriend Lula: “You marry me, I buy you the Wonder Wheel.” She married him and 35 years later, the Wheel came up for sale and he kept his promise and bought it for her, the world’s largest engagement ring.

After a backbreaking restoration that took several years, the Wonder Wheel prospered, becoming an official New York City landmark in 1989. Three generations of the Vourderis family –parents, children, and grandchildren—have worked to make Deno’s Wonder Wheel Park a success story, the best that Coney Island has to offer. Denos passed away in 1994, and Lula followed him 2019. West 12th Street adjacent to the park is named “Denos D. Vourderis Place” and “Theodora Lula Vourderis Way” in their honor.

The Greek American Folklore Society is dedicated to the study, preservation and instruction of the history and traditions of Hellenic folk culture. They share their work with the public through stage re-enactments of traditional Greek customs, songs and dances, as well as through lectures, exhibits and workshops. Founded in 1983 as a non-profit organization in Astoria, the Society's activities encompass a wide variety of folk art traditions from all regions and islands of Greece, in addition to the communities of the Greek Diaspora past and present.