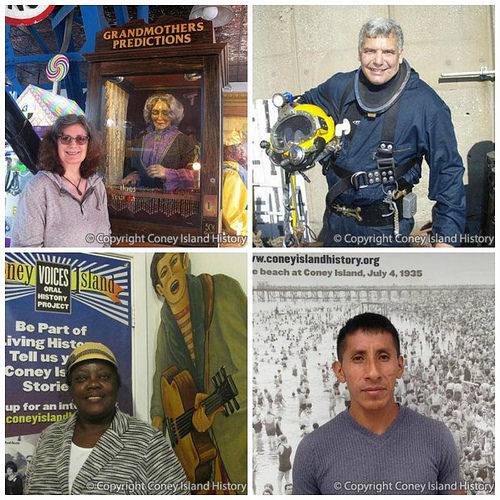 Visit the Coney Island History Project's Oral History Archive to listen online to audio interviews with Coney Island residents, business owners, and visitors - both past and present. Among the additions to our online archive in 2016 are the following interviews recorded in English, Spanish and Russian. Please listen, share, and if you or someone you know would like to record a story, sign up here.

Artist Johanna Gargiulo Sherman shares vivid memories of growing up in Coney Island, where her family lived on Mermaid Avenue above the Carolina Restaurant. Her father Joe "Carolina" Gargiulo led a musical trio and was one of the partners in this popular Italian restaurant from 1947 through the 1980s.

Ecuadorian-born Julio Sauce is a Gravesend resident who has been running in the Coney Island 5K, Brooklyn Half Marathon and New York Marathon since 1998 and is among the fastest local runners in his age category. The interview was recorded in Spanish and includes Spanish and English transcripts.

Shirley Aikens, president of the Carey Gardens Tenants Association and a member of Community Board 13, recounts moving to Carey Gardens with her one-year-old daughter in the 1970s, her first impressions of Coney Island, and how the community has changed over the years.

Antoinette Balzano, a granddaughter of Anthony "Totonno" Pero, the founder of Totonno's Pizzeria Napolitana, tells her family's story. Pizzas have been made in the same way at the Neptune Avenue restaurant since 1924.

Alfie Davis, who has lived in Coney Island for nearly 40 years and is the Tenant Association Leader of the Sea Rise I complex in Coney's West End, tells the story of three generations of her family. 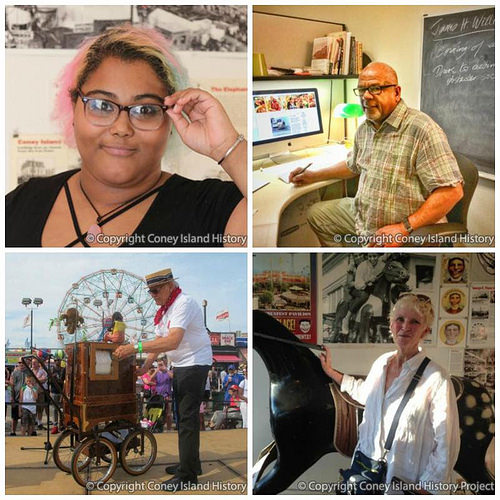 Coney Island resident Derrick Batts opened Coney Island Hook and Bait Shop on West 24th Street off Mermaid Avenue in May. He recounts learning about life from fishing and gardening, both of which he was introduced to as a boy by older members of the community, and passing on that knowledge to young people.

Candi Rafael, whose family operates games on Coney Island's Bowery, grew up here and started helping out as an eight-year-old. Now 22, she demonstrates the spiel that she uses to call people in to play the games and describes what it's like to work in Coney Island.

On her first day back in Coney Island since 1959, Kathy Duke O'Melia shares memories of joyful summers spent with her family at a bungalow colony located on West 31st Street near Coney Island Creek.

Commendatore Aldo Mancusi, the founder of the Enrico Caruso Museum of America, recalls visiting Coney Island in the 1930s and '40s and growing up in Brooklyn in an Italian family.

Historian Eric K. Washington delves into the life of E.J. Perry, an African-American silhouette artist who worked in the early 20th century at Luna Park, where it was said "he is there with a nice spiel and and he cuts your picture with the scissors in a minute."

Coney Island resident Zinovy Pritsker emigrated from Leningrad to Southern Brooklyn in 1978. His jazz big band, founded 20 years ago, consists of 18 Russian musicians and singers plus a few Americans. The interview was recorded in Russian and includes Russian and English transcripts.

Thanks to CM @MarkTreyger718 for his continued efforts to preserve the #ConeyIsland #Boardwalk! His bill would bar… https://t.co/r7oF2kCSLy
9 hours 50 min ago

RT @Nurelah: Not everyone was paying attention at this morning's staff meeting at Coney Island 😊❤️❤️❤️❤️❤️ https://t.co/GKwuAoKcGc
1 day 3 hours ago