Saying Goodbye to Summer and Cheers to the Spook-A-Rama Cyclops! On September 7th, the Coney Island History Project wrapped up the summer season and celebrated its 10th anniversary with a Bon Voyage Party for the Spook-A-Rama Cyclops, which has been on display at CIHP's exhibit center for the past two years. Fans of the nearly 60-year-old Coney Island icon turned out to snap souvenir photos, sip ghoulade and eat eyeball cookies. More than 150 guests signed a goodbye card.

Among the bon voyage wishes adorned with hand-drawn hearts and a lipstick kiss were "Oh Cy (sigh!). You're the One Eye ("I") Adore. Have a great trip." and "I grew up with you. Can't wait for your return!" The Vourderis family, owners of Deno's Wonder Wheel Park, home of Spook-A-Rama, wrote "We'll keep an eye on you all the way from Brooklyn...until you return here." Winners of a contest and their guests were treated to a rare behind-the-scenes tour of the classic dark ride led by Wonder Wheel Park's D.J. Vourderis and the Coney Island History Project's Charles Denson.

Two days later, the Cyclops was carefully packed by art shippers and his journey from amusement park to art world began. "Cy" will be part of the exhibit "Coney Island: Visions of an American Dreamland, 1861-2008," which will be on view at the Wadsworth Atheneum Museum of Art in Hartford, Connecticut from January 31 - May 31 2015, before traveling to the San Diego Art Museum and the Brooklyn Museum. 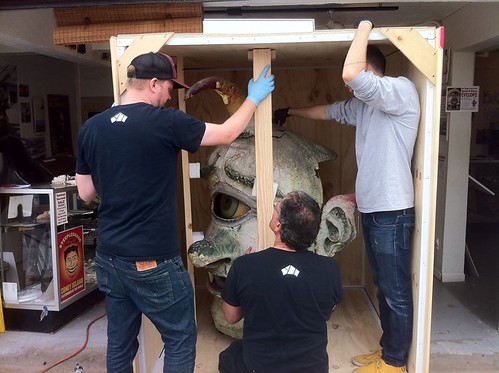 The journey begins! The Spook-A-Rama Cyclops being packed by art shippers at the Coney Island History Project for shipment to the Wadsworth Atheneum. Horn and ears were custom-cushioned. September 9, 2014. Photo © Charles Denson

Today in 1898 Edwin Prescott patented his #LoopTheLoop #RollerCoaster. In 1901, he built this one in #ConeyIsland a… https://t.co/CsZcCvGsLR
15 hours 34 min ago

RT @ConeyIslandFun: It's #NationalRollerCoasterDay! Check out the thrilling rides in Coney Island🎢 Deno's @WonderWheelPark is offering FRE…
15 hours 48 min ago