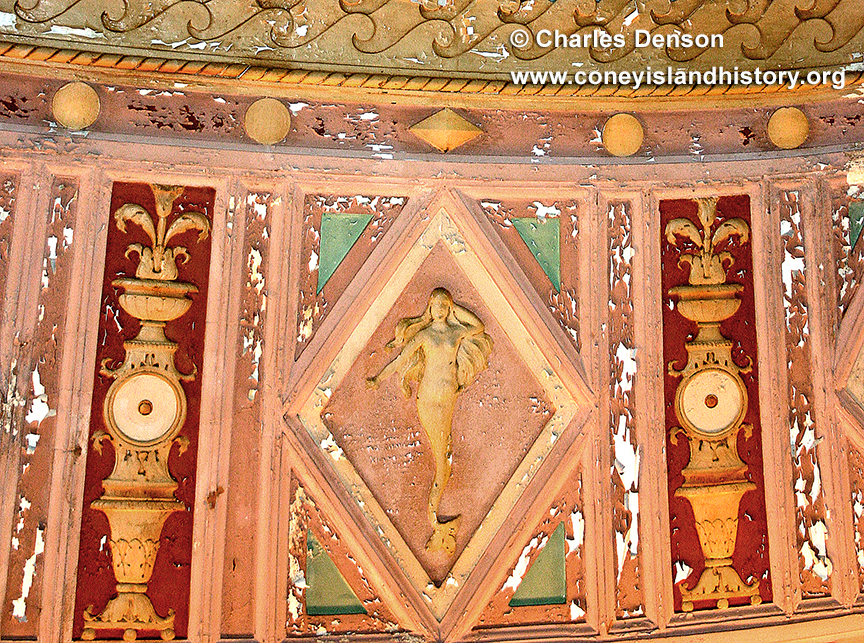 GONE FOREVER: Beautiful nautical-themed details of the old theater were lost to neglect and vandalism.

Three months ago I was contacted by Eduard Yadgarov of Pye Properties, new owners of the old Shore Theater building, regarding the company's plans for the structure and a possible collaboration with the Coney Island History Project. During our meeting at the sleek new company offices on West 8th Street, I was shown plans for the renovations and new attractions that include a hotel and rooftop restaurant.

We discussed historic preservation of the ornate interior details that I documented a decade ago. I was then told the bad news: Almost all of the beautiful plaster decorations, the mermaids and ships that had once embellished the mezzanine and other areas, had been destroyed by vandalism and water leaks during the time that the building had been occupied by squatters prior to Pye's purchase of the building. Horace Bullard's heirs had let the building rot, and the roof had been leaking for years.

On October 5 Yadgarov and his father gave me a tour of the theater's interior. After donning hard hats, we used flashlights to work our way through the ruins of the once elegant theater. The damage was extensive. In the years following Horace Bullard's death, the vacant building had been stripped of its window frames and almost anything else of value. Water damage had destabilized the theater's decorative interior and exterior brick walls to a point that seemed beyond repair. Only a few historic items remained, and Yadgarov assured me that those relics will be preserved and included in the new construction.

In 2010 I testified in favor of landmarking the building and also gave a presentation at the Landmarks Preservation Commission hearing that showed the building's interior, hoping that it could be saved. I had always imagined that the theater could somehow be preserved much as the old Harvey Theater at BAM had been renovated and restored while leaving most of the original details.  But after the tour, which was extremely hazardous as plaster was still collapsing around us, I realized that this was a hopeless situation. The ceiling of the mezzanine with its mermaids and ships and ocean motifs was gone, leaving only piles of damp debris. No trace of the artwork remains.

The only surviving remnants are the beautiful marble columns, ornate railings, and the mosaic water fountain, which Pye Properties has promised to retain, restore and place in the new hotel's lobby. The theater's ceiling and enormous dome, which I had once seen re-wired and lit up by former caretaker Andy Badalementi 10 years ago, has suffered serious water damage. I doubt that it can be salvaged. This was a sad tour, but afterwards I complimented Yadgarov on the company's ambitious efforts to renovate and repurpose the landmark structure. Not many developers would take on such a seemingly impossible and expensive task. Although a restored theater would have been a great project, it no longer seems feasible. It will be wonderful to have the landmarked building open to the public once again, filled with new amenities and attractions for Coney Island. 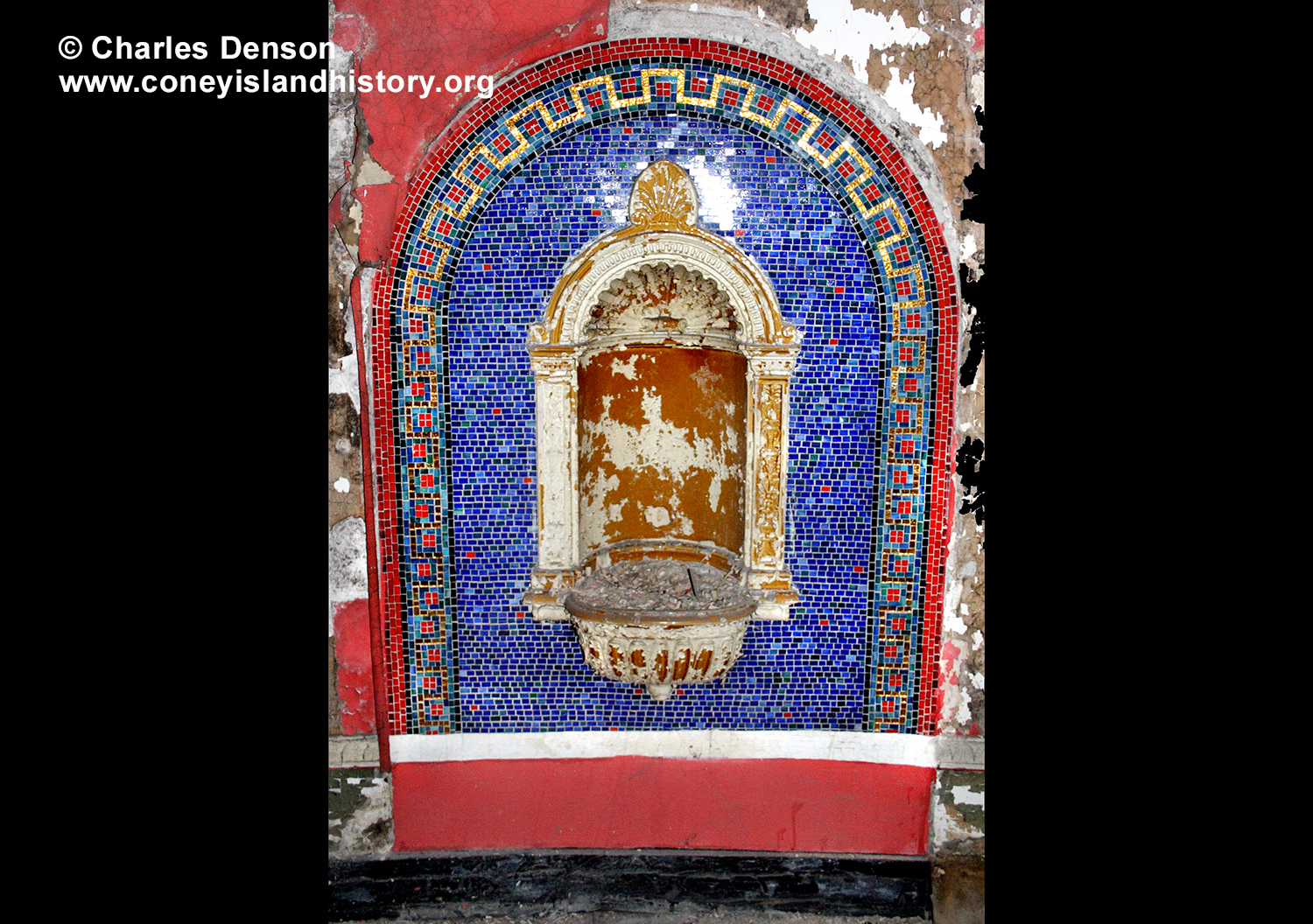 SAVED: The mosaic fountain on the theater's mezzanine will be preserved and restored. 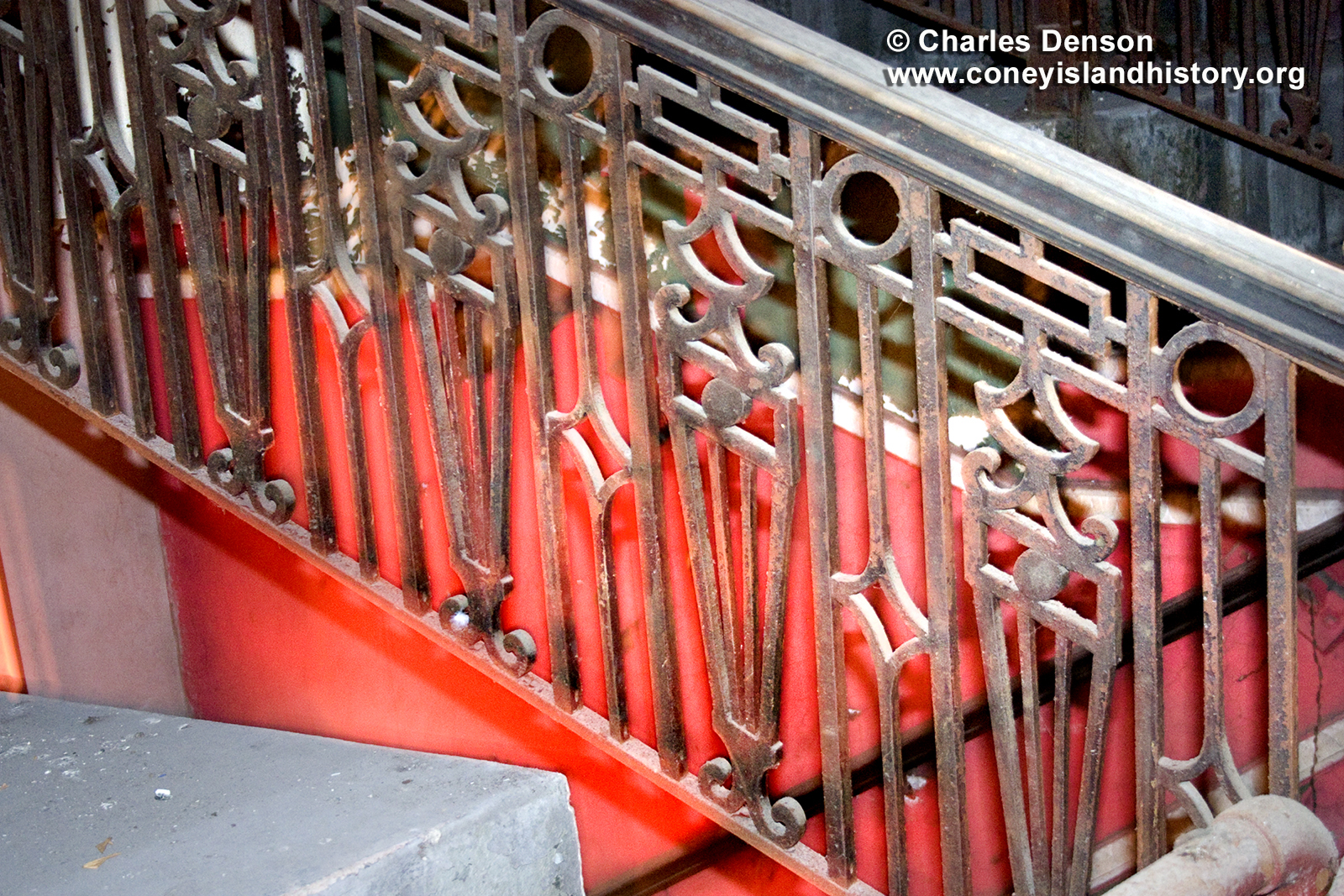 SAVED: The ornate railings on the balcony steps will be salvaged and repurposed. 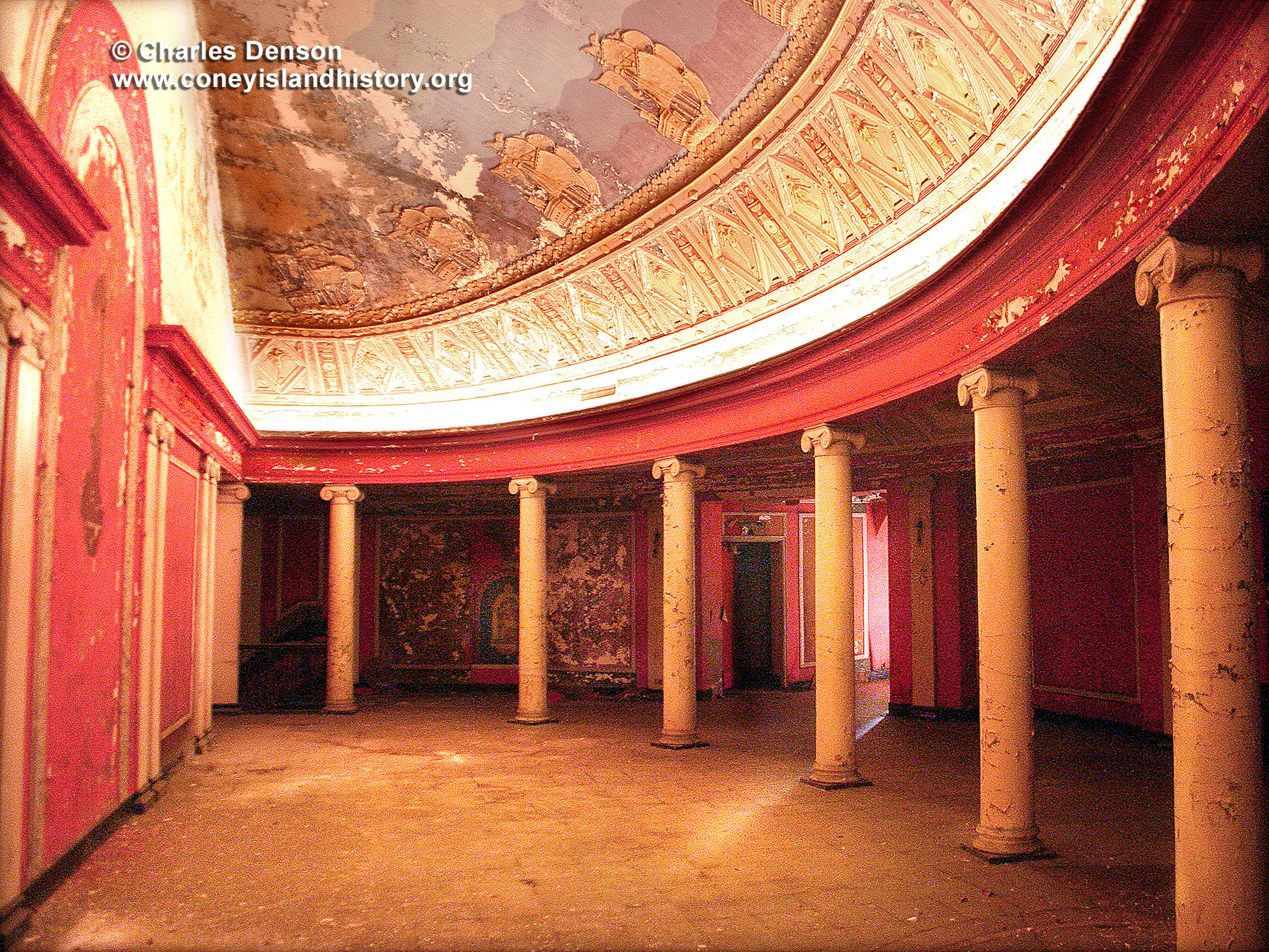 2006: The theater's marble columns have survived and will be restored and placed in the hotel's lobby but the plaster ceiling artwork is gone forever. 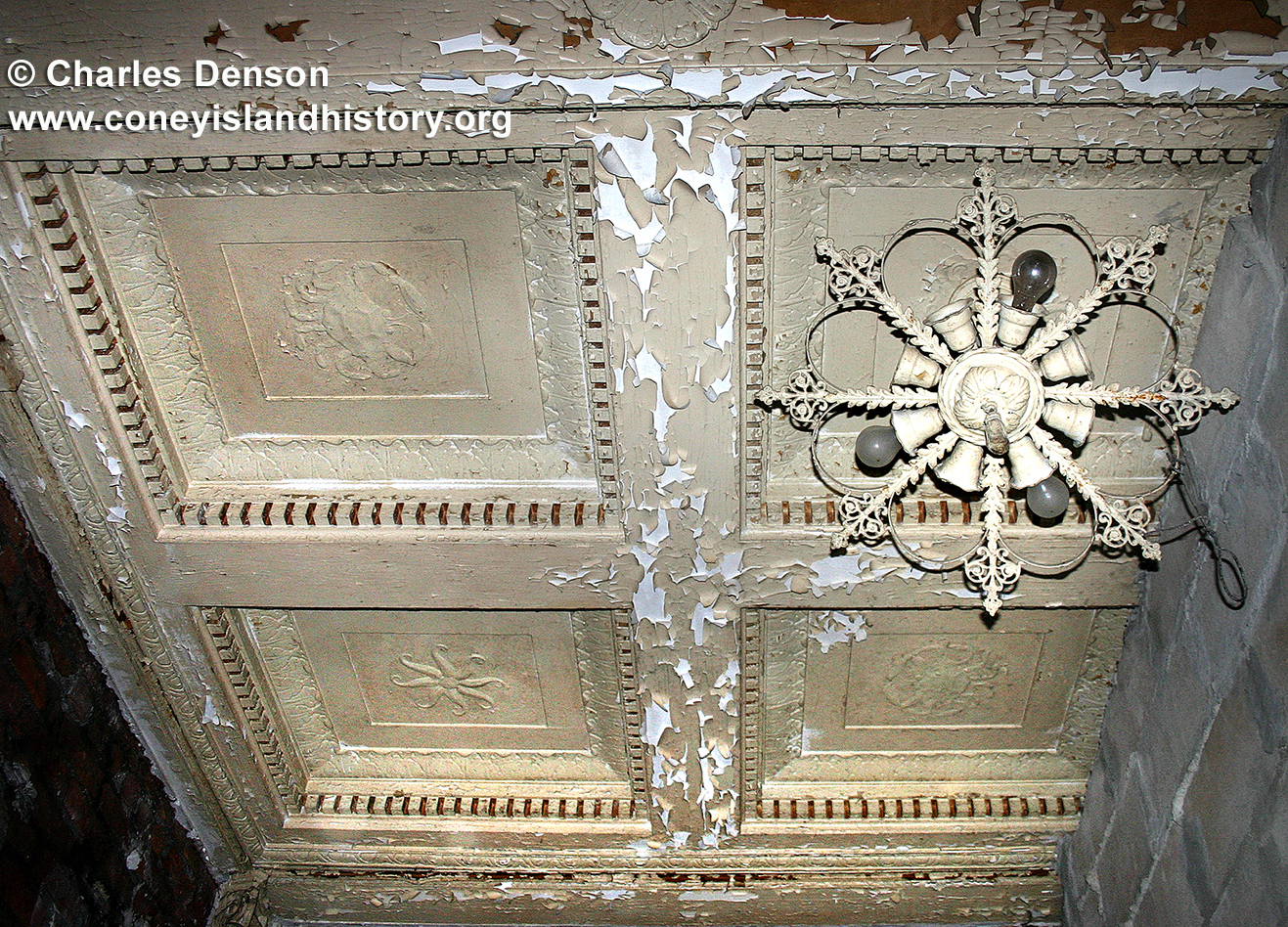 The lobby ceiling, decorated with nautical creatures and sporting unusual lighting fixtures, is intact and will be restored by Pye Properties.

I remember the grandeur of this theater from my youth.. I only wish that it can be restored to its former glory...

Today in 1898 Edwin Prescott patented his #LoopTheLoop #RollerCoaster. In 1901, he built this one in #ConeyIsland a… https://t.co/CsZcCvGsLR
16 hours 38 min ago

RT @ConeyIslandFun: It's #NationalRollerCoasterDay! Check out the thrilling rides in Coney Island🎢 Deno's @WonderWheelPark is offering FRE…
16 hours 52 min ago