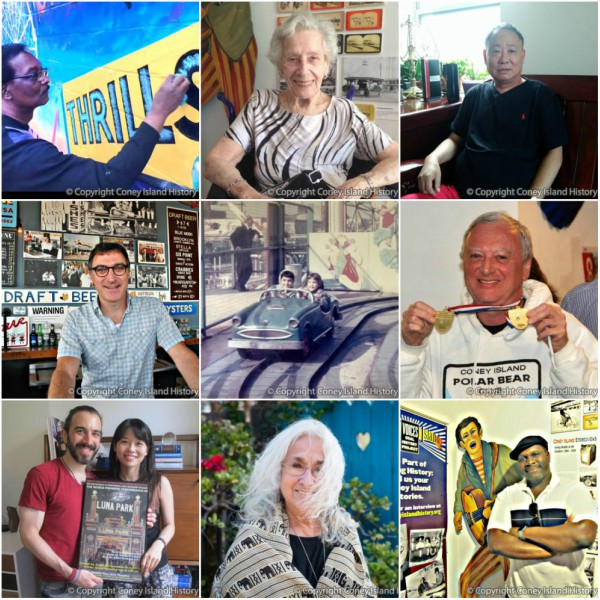 Among the additions to the Coney Island History Project's online Oral History Archive are the following interviews recorded by Amanda Deutch, Charles Denson, Kaara Baptiste, Mark Markov, Samira Tazari, and Xiaoyan Li. Please listen, share, and if you or someone you know would like to record a story, sign up here. Interviews may be recorded in English, as well as Chinese, Russian, Spanish, and other languages.

Stephen Gaffney is an artist who restored the beloved vintage signs and painted new ones for Paul's Daughter, the oldest operator on the Coney Island Boardwalk. He talks about how he "memorializes the goings on of the store" with some of his signage, such as Paul's call to customers "Hey! Get It, Get It!"

Naum Barash recounts his 50 years of winter swimming in Ukraine and Brooklyn. A native of Chernovtsy in Ukraine, he is a member of the Coney Island Polar Bear Club. This interview was conducted and recorded in Russian, and includes a Russian transcript and an English translation.

Gladys Sandman and Lucille daCosta, née Salvia, share girlhood memories of growing up on Coney Island's West 5th Street in the 1950s and early '60s before their home was demolished to make way for Warbasse Houses.

Sam Moses, 66, tells stories of his boyhood apprenticeship at a Brooklyn sign shop and his dreams of painting in Coney Island. In 1998, he moved to Sea Gate and started working out of a sign shop in a trailer behind Nathan's. The front of Denny's Ice Cream on Surf Avenue was one of his masterpieces.

Anthony Wang, a resident of senior housing in Coney Island, was born in Shanghai, survived the Cultural Revolution, and immigrated to the U.S. in 1992. This interview was conducted and recorded in Mandarin, and includes a Chinese transcript and an English translation.

Gloria Nicholson was born in Coney Island in 1940 and grew up in a rooming house that her mother managed on the Bowery. She reminisces about the unusual attractions and cast of characters who populated her childhood including Ned Tilyou, Tirza's Wine Baths, Shatzkins Knishes, the Shark Lady, and fortune-telling myna birds.

Jeffrey L. Wilson shares memories of growing up in Coney Island, where his family moved to O'Dwyer Gardens from Flatbush in 1986. Now an editor at PC Magazine, he writes about video games and other tech subjects, and talks about his formative years as a regular at Faber's Fascination arcade.

Deena Metzger is a writer, poet and healer who was born in Brighton Beach in 1936, moved to Sea Gate when she was three, and went to school in Coney Island. "The land, the water, the sea were formative characters in my life," she says. "When I was young I believed that one learned to write by walking."

Michael Cooper and Hyeyoung Kim are a lyricist and composer who began working collaboratively in 2005. They talk about researching and writing Luna Park, a musical which chronicles the partnership of Fred Thompson and Skip Dundy, creators of Coney Island's first Luna Park.

Ida Rosenblum Gambrell, 94, recalls her childhood summers in Coney Island at her aunt's home on Surf Avenue and West 24th Street, where one of the rooms was rented to summer boarders, and getting separated from her family during the chaos of the Luna Park fire of 1932.

Recorded in Cantonese with Chinese and English transcripts! Thanks to Council Member @MarkTreyger718, @NYCCouncil a… https://t.co/PDkE9trPM5
1 day 7 hours ago