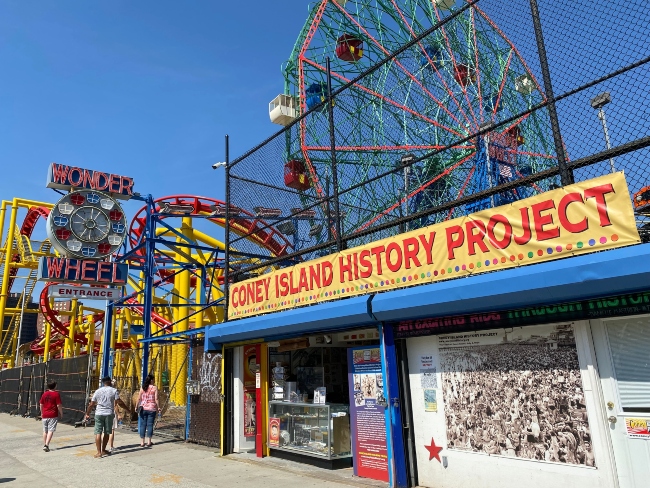 The Coney Island History Project's exhibition center opens for the 2022 season on Saturday, May 28th, of Memorial Day Weekend. Since the History Project's inception in 2004 with a portable recording booth on the Boardwalk and the inaugural season of our exhibition center in 2007, we have proudly offered "Free Admission for One and All!” The exhibition center is open free of charge on Saturdays, Sundays and holidays (1:00PM-7:00PM) from Memorial Day Weekend through Labor Day. We're located at 3059 West 12th Street, adjacent to the West 12th Street entrance to Deno's Wonder Wheel Park, just a few steps off the Boardwalk.

Visitors can view historic artifacts, photographs, maps, ephemera and films of Coney Island's colorful past. You're invited to take free souvenir photos with "Cy," the mesmerizing Spook-A-Rama Cyclops, and Coney Island's only original Steeplechase horse from the legendary ride that gave Steeplechase Park its name. Our rarest treasure on display is Coney Island's oldest surviving artifact from the dawn of the "World's Playground." The 1823 Toll House sign in our collection dates back to the days when the toll for a horse and rider to "the Island" was 5 cents! Visitors can also share and preserve their Coney Island memories by recording an oral history for our multilingual archive, which has over 400 interviews available for online listening.

The Coney Island History Project's special exhibition for the 2022 season is "Barbara Rosenberg: Coney Island Street Photography, 1964-2010," on view from May 28 through September 5, 2022. Barbara Rosenberg (1938-2016) was born and raised in New York City, where she lived her entire life. She was the consummate New Yorker, a social worker who dedicated her life to street photography here, and around the world. Barbara began taking photos as a kid and always had a camera with her. "I was drawn to photography after seeing the photographic images of the French photographers Doisneau, Brassaï, and Cartier-Bresson," she said, "New York City became my canvas, the streets and Coney Island especially, supplied me with an unending source of images."

RT @CIpolarbearclub: Are you ready for the best party of 2023? Our registration is OPEN! https://t.co/XPE3vuDvbs - make sure you fill out…
2 days 15 hours ago

Casino Fever: The Last Time Around, an excerpt from Charles Denson's 2002 book, Coney Island: Lost and Found: "In 1… https://t.co/jykQygopaT
3 days 6 hours ago