Spook-A-Rama Cyclops Back in Coney! "Artist Unknown" Who Created It ID'd 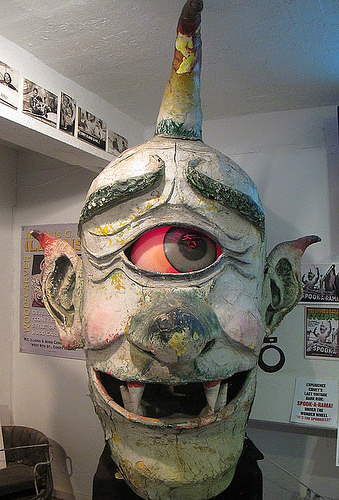 When the Spook-A-Rama Cyclops left Coney Island in 2014 for a national tour of art museums as part of the NEH-funded Wadsworth Atheneum Museum of Art exhibit "Coney Island Visions of an American Dreamland," the identity of the artist who created this fabulous piece of folk art remained unknown. Until now.

The Cyclops - or "Cy" as we affectionately call him - has returned home to Deno's Wonder Wheel Park and beginning Memorial Day Weekend will be on display at the Coney Island History Project along with documentation of the artist who created the iconic sculpture and its mesmerizing moving eye nearly 60 years ago.

Thanks to the reminiscences of a former neighbor, Roy Omori, who recalled the artist building the figure in his yard, the Coney Island History Project has learned that he was Dan Casola (1902-1990), a Coney Islander known to us by reputation as a highly regarded painter of sideshow banners. Less well known is that he made mechanized props and painted signs for a number of Coney Island attractions including the 1950's dark ride Spook-A-Rama, created wax figures for Lillie Santangelo's World in Wax Musee, and painted the mural over the bar at Club Atlantis on the Boardwalk. Born in Italy, Dan Casola's family emigrated to New York when he was a child. He lived and worked in Coney Island until the late 1970s when he retired to Arizona.

Interviews with Dan Casola's daughter Patricia Casola and son Wesley Casola recorded by Charles Denson for the Coney Island History Project's Oral History Archive provide details of their father's life as a freelance artist. Patricia Casola describes him as a tinkerer and a self-taught man who told her, "I learned by doing this," when she asked where he got his skill and inspiration. Says Wesley Casola, who recalls his father creating the Cyclops from plywood, chicken wire and sheets of celastic, "it'd be nice for him to get some credit for it." 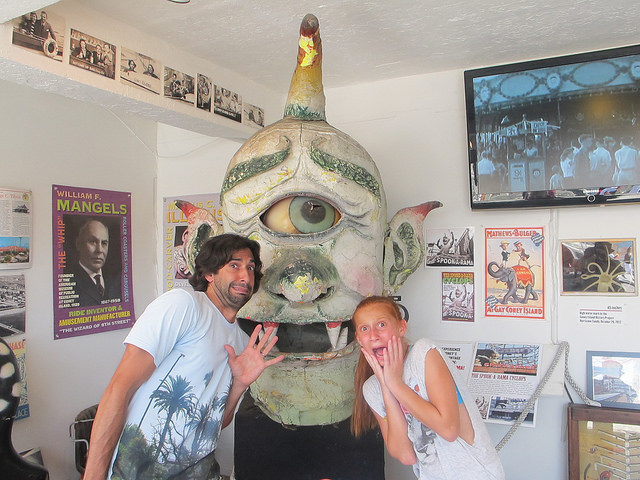 The artist had a penchant for maintaining multiple studios, including two in the family's home on Stillwell Avenue and a secret studio behind Spook-A-Rama, where they brought him dinner. Boxes full of glass eyeballs for the taking and free rides were some of the perks of being Danny's kids. The artist's appropriation of household items such as his wife's black brassiere and his children's wind-up toys for his spooky creations was legend. The interviews are available for online listening on the Coney Island History Project's website.

The circa 1955 Spook-A-Rama, located in Deno's Wonder Wheel Park, is Coney Island's oldest operating dark ride. In September 2011, the Cyclops, a Coney Island legend that had originally sat atop the roof of Spook-A-Rama but had not been seen for decades, came out of retirement to be inducted into the Hall of Fame at the Coney Island History Project. After being stabilized it became the centerpiece of our induction ceremony and a popular attraction at the History Project exhibition center from 2012 through 2014.

As part of the traveling exhibit "Coney Island: Visions of an American Dreamland," the Cyclops traveled for the past two years in the company of artwork by some of America's most distinguished artists to the Wadsworth Atheneum Museum of Art, San Diego Art Museum, Brooklyn Museum and San Antonio Museum of Art. 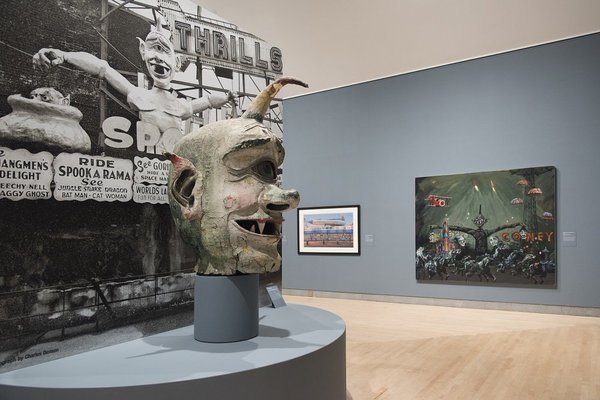 The Spook-A-Rama Cyclops on view in "Coney Island: Visions of an American Dreamland" at the Brooklyn Museum in 2016 with Charles Denson's photo of Cyclops atop Spook-A-Rama as a backdrop and Arnold Mesches' painting "Anomie 2001: Coney" featuring the Cyclops. Photo: Brooklyn Museum

"The sculpture is unique, one-of-a-kind, a throwback to the hand-made craftsmanship and creativity that made Coney the center of the amusement universe," said Coney Island History Project director Charles Denson.

The Spook-A-Rama Cyclops will be on view at the Coney Island History Project exhibition center located on West 12th Street at the entrance to Deno's Wonder Wheel Park, just a few steps off the Boardwalk. The History Project is open Saturdays, Sundays and holidays from Memorial Day Weekend through Labor Day from 1-7pm. Admission is free of charge.

Is there a written history of the location and where-abouts of Cyclops over its life time? What was it’s use? Are there many pictures of it in its working settings? If there are historic photos could they be collected and made available. Where was it displayed and what exposure to the weather and how was maintained and preserved...thanks, Tim LaGanke , Novelty , Ohio.
I have a large collection on automatons and amusement park collectibles. Including Old King Cole , PTC pieces ,, Lafing Lady, Bearded Giant, Tough Guy and others.