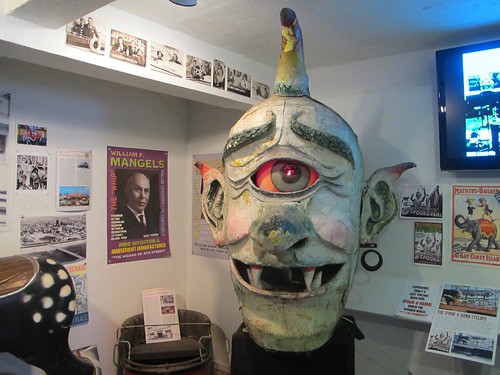 Deno's Wonder Wheel Park and the Coney Island History Project cordially invite you to a Bon Voyage Party for the Spook-A-Rama Cyclops on Sunday, September 7, from 12pm-6pm. The 1950s folk art icon is leaving Coney Island for the first time in his life to be part of Coney Island: Visions of an American Dreamland, a traveling exhibit organized by Robin Jaffee Frank, chief curator and Krieble Curator of American Paintings and Sculpture, Wadsworth Atheneum Museum of Art, which opens in January. Our beloved "Cy" will tour museums across the country through 2016 in the company of artwork by some of America's most distinguished artists.

"The sculpture is unique, one-of-a-kind, a throwback to the hand-made craftsmanship and creativity that made Coney the center of the amusement universe," said Coney Island History Project director Charles Denson, who has been a consultant for the exhibit since 2010 and wrote an essay for the forthcoming catalogue.

Your last chance to take a free souvenir photo with the Cyclops at the Coney Island History Project, where "Cy" has posed with thousands of visitors over the past two years, will be the Bon Voyage Party on September 7 since the sculpture will be shipped later that week. The History Project will be open for this special event. The Cyclops is also on view during the History Project's regular season --Saturdays, Sundays and holidays through Labor Day, September 1, from 12 pm-6pm. Admission is free of charge. 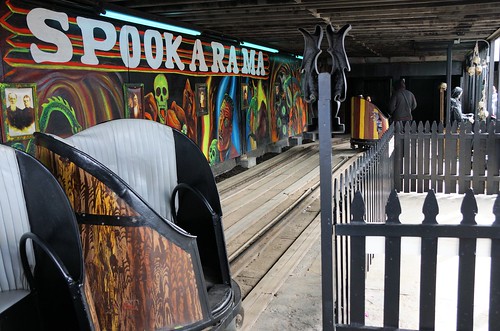 Deno's Wonder Wheel Park, home to Spook-A-Rama, Coney Island's oldest operating dark ride, will serve ghoulade and eyeball cookies to the first 500 guests on September 7. Spook-A-Rama was carefully refurbished in 2012 after serious damage from flooding during Hurricane Sandy. Along with the restored Pretzel cars and tracks, the ride has exciting new props. Some of the old props were rescued and preserved and will be on public display on September 7 to wish their friend the Cyclops a bon voyage. Spook-A-Rama is one of 21 rides in Deno's Wonder Wheel Park, which is open daily through Labor Day, then weekends and holidays through October 26.

Planning to come to the Cyclops' goodbye party? Enter a contest to win the chance to go on a rare behind-the-scenes tour of Spook-A-Rama on September 7 at 11 am, before the ride opens, led by Wonder Wheel Park's D.J. Vourderis and the Coney Island History Project's Charles Denson. To enter the contest, tell us why you love Spook-A-Rama and want to join the tour. Submissions may be emailed to wonderwheelcat[AT]gmail[DOT]com or posted on Deno's Wonder Wheel Park's Facebook page (https://www.facebook.com/DenosWonderWheelPark). Only 10 winners will be selected. Each winner may bring one guest. Winners will be notified in advance of the tour. 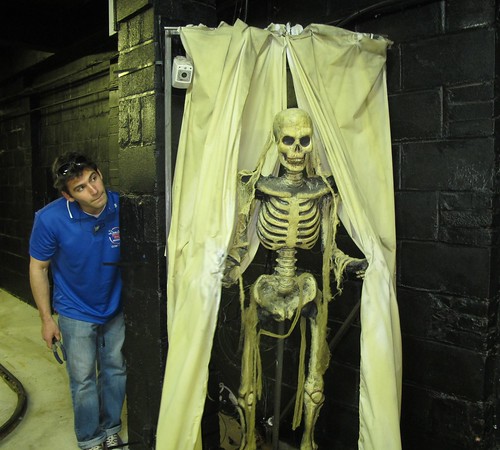 ABOUT THE CYCLOPS In September 2011, Spook-A-Rama's Cyclops, a Coney Island legend that hadn't been seen in decades, came out of retirement to be inducted into the Hall of Fame at the Coney Island History Project. Lula Vourderis accepted the plaque on behalf of Deno's Wonder Wheel Park and the Vourderis Family.

In his speech honoring the Cyclops, Charles Denson said: "Last year I was hired as a consultant for an upcoming university art exhibition about Coney Island. While researching artwork for the exhibit we realized that the Cyclops head was an iconic and recurring image in dozens of modern artworks. The curator and I wondered if it still existed and if it could be included in the exhibition. I asked Steve Vourderis if the Cyclops had survived. He had a surprise for me. It was in storage right behind the History Project.

"After being excavated and stabilized it became the centerpiece of our induction ceremony. The Cyclops represents the creativity of Coney Island's artisans and visionaries. In the past, anyone with a vision could create a fantasy, and you didn't need formal artistic training to create a work of art. And you didn't need an engineering degree to build a ride. Spook-A-Rama opened in the 1950s at a time when monster movies and Cinerama were popular. It's a one of kind work of art, a cultural artifact handmade from ordinary bandages and plaster of Paris." 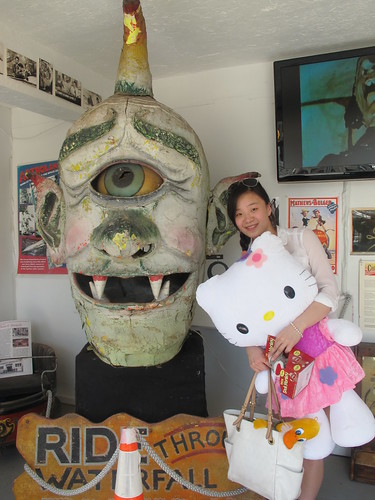 ABOUT THE TRAVELING EXHIBIT

On view at the Wadsworth in Hartford, Connecticut, from January 31 - May 31 2015, the Spook-A-Rama Cyclops will travel to the San Diego Museum of Art from July - October 2015, the Brooklyn Museum from November 2015 - March 2016. According to the Wadsworth, "Coney Island: Visions of an American Dreamland will be the first major exhibition to use visual art as a lens to explore the lure that Coney Island exerted on American culture over a period of 150 years." Among the 130 objects--paintings, drawings, photographs, prints, posters, architectural artifacts, and carousel animals--supplemented by ephemera and film clips in the exhibit are works by William Merritt Chase, Reginald Marsh, Joseph Stella, Yasuo Kuniyoshi. Diane Arbus, Walker Evans, and Red Grooms. 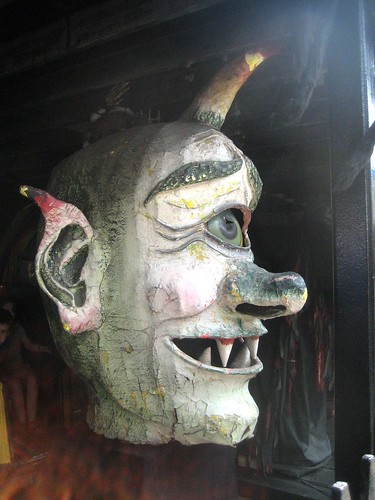 RT @WSJphotos: Photographer Violette Franchi caught New York's Coney Island beachgoers on their own personal "runway" as they left for the…
8 hours 54 min ago