Coney Island Creek: The Good, the Bad, and the Ugly!

The Good:
Local schools are taking a new interest in Coney Island Creek and its relationship with the surrounding community. As part of the History Project’s education outreach program, we seek to partner with schools whose curriculum incorporates local history and environmental issues. This spring I gave two history and ecology presentations to local students and was surprised to find increasing concern about our endangered waterways.

In March, New York Aquarium Director Jon Dohlin and New York Seascape Program Officer Mai Murphy invited me to participate in a workshop presentation at the Aquarium’s Education Hall for a high school ecology group called the Wildlife Conservation Corps. Students taking part in the program, led by Aquarium artist-in-residence Christy Ghast, are filming, directing, and editing a new video that follows one piece of plastic trash from the time it’s collected from local marine waters backward to the place where it came out of the ground as petroleum. The piece of plastic was gathered from Coney Island Creek during a recent cleanup. My presentation covered the history of the creek, the dangers of “floatable” pollution on the creek and what can be done to prevent it in the future. 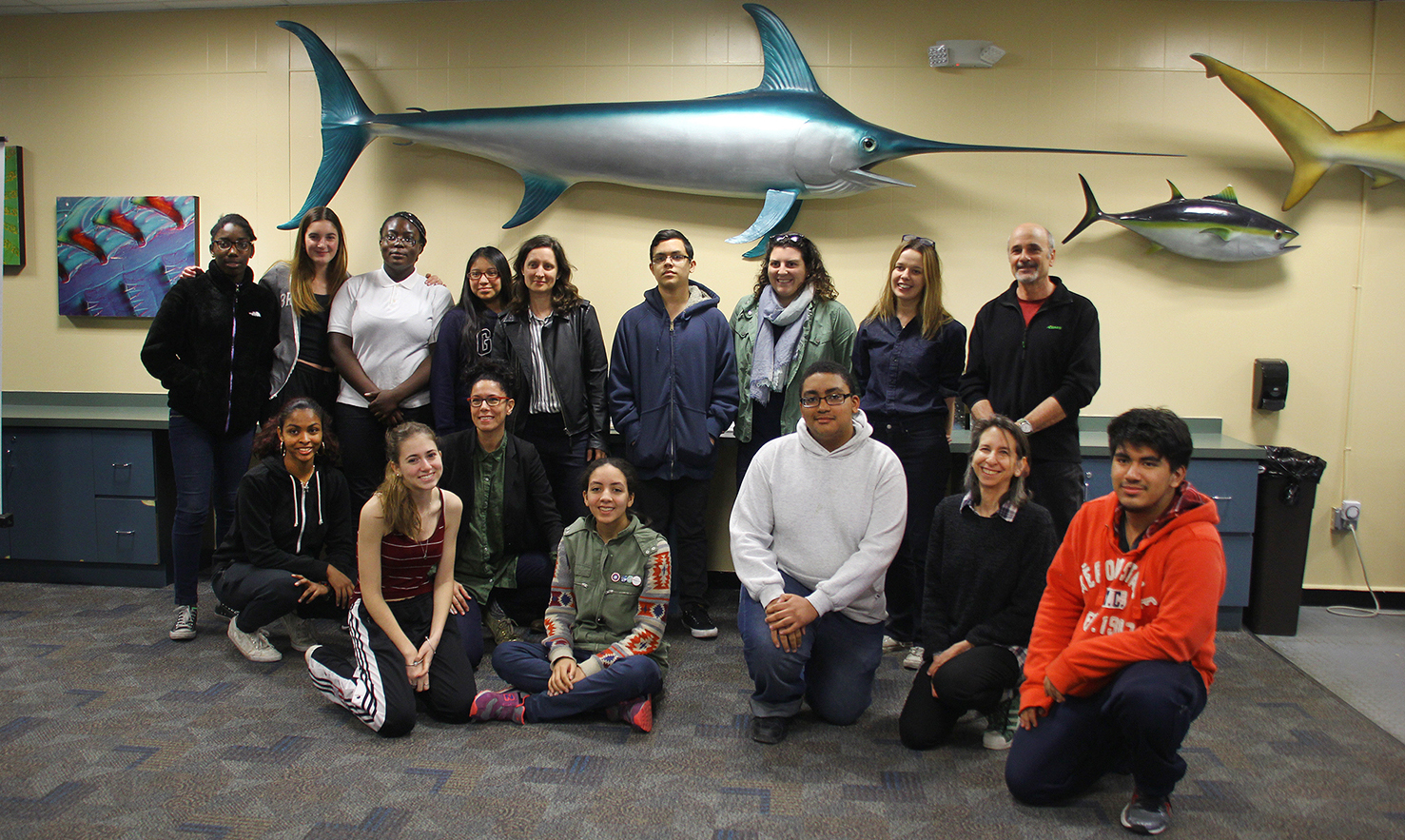 My second program took place in April at PS 90, just up the block from the Coney Island History Project. I was surprised to learn that PS 90 is now known as the Magnet School for Environmental Studies and Community Wellness. Students from kindergarten to fifth grade are studying advanced topics such as “balanced ecosystems, the effects superstorms, and properties of water.”

I was supposed to work with fourth grade students, but after a meeting with the teachers I was asked to give a talk to nearly the entire school in the auditorium. I was amazed at the intensity of interest in local history and the issues affecting Coney Island Creek. The students had no idea that a hotel in the shape of an elephant was once located across the street from the school’s site, and that the school is built on top of a tributary of the creek that still flows below the street. They also learned the origins of pollution and how ignorance led to the destruction of the 3,000-acre salt marsh that once surrounded the creek. I left them with the message that they are the ones who will be the future stewards of the Coney Island Creek estuary, and that what they are learning has great practical importance for the future of the community.

A big thank-you to Councilmember Mark Treyger for supporting our education programs!

The Bad:
Several days before the “It’s My Estuary Day” event was scheduled to take place at Kaiser Park, researchers at Kingsborough College revealed that Coney Island Creek’s fecal coliform levels were far above normal and in fact were registering 13 times above safe levels. The EPA’s allowable level is 200 parts per 100 millimeters, and the creek was registering an average of 2,600 parts per 100 millimeters. The samples were collected near Calvert Vaux Park at the mouth of the creek. Fecal coliform exposure can cause symptoms including nausea, stomachache, diarrhea, and fever, as well as serious illnesses. This is incredibly bad news for park visitors who swim, fish, and kayak in the waterway.  It shows how much work is needed to find the sources of pollution and to clean the creek in order for it to be safe for the surrounding communities.

The Ugly:
On May 3, the Brooklyn Daily reported that several community members they interviewed claim to have become sick from swimming at the mouth of Coney Island Creek and demanded that signs be posted warning against swimming. The real tragedy is that signs will do nothing to clean the creek and people will continue to swim at the beautiful beach at Coney Island Creek Park. What’s needed is a concerted effort to restore the creek to its natural state as a beneficial wetland environment. The most positive affect from posting signs and banning swimming is to raise community awareness about the waterway’s vulnerability and the city’s continuing use of the creek as an open sewer for the Southern Brooklyn watershed.

At a Community Board 13 meeting I attended in March, NYCEDC officials confirmed that “filtered water” from new sanitary sewer excavations in Coney Island would be pumped into the creek for the next two years. The new sewers will service nearly 5,000 units of new high-rise housing surrounding the amusement area as part of the city’s 2009 rezoning plan. Two years ago “filtered water” from a long-neglected storm sewer outlet being cleaned at West 33rd Street created a noxious black stream that surrounded swimmers and anglers at the mouth of the creek. No warning signs were posted during the work. At the CB 13 meeting, the EDC representatives said they’re planning to use old permits that allow them to circumvent the new, stricter water-quality regulations covered by new MS4 permits. It’s hard to believe that this new groundwater pumping into the creek will not negatively affect water quality. 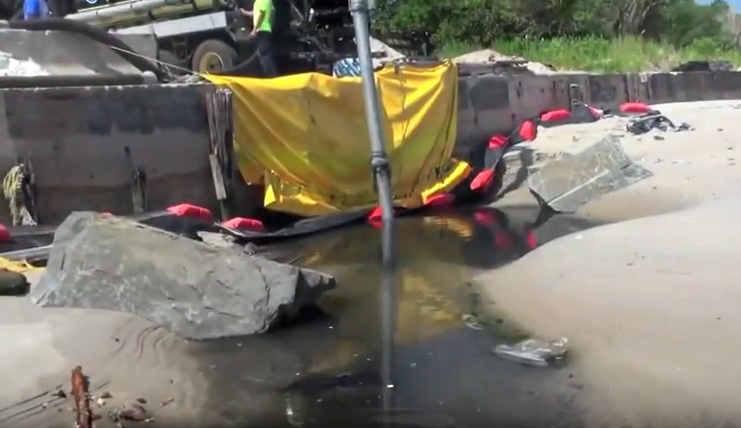 When a Coney Island Creek storm sewer at West 33rd Street was recently cleaned after years of neglect, a black stream of pollutants was poured into the waterway. More "filtered water" will be pumped into the creek this summer as part of new sewer construction in Coney Island. Photos by Charles Denson 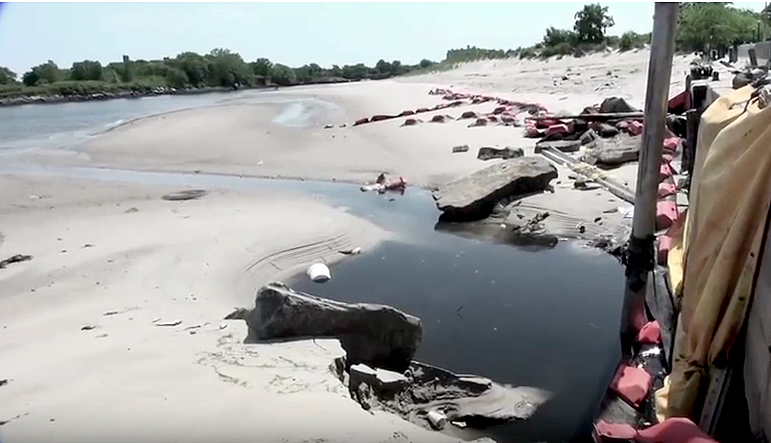 In other news, the creek’s future remains in doubt as the Army Corps of Engineers still hasn’t announced when or if the massive flood control barrier proposed for the creek will be built. The creek was recently bypassed for ferry service, dashing hopes for a faster way for residents and visitors to travel to and from Coney Island. Major decisions are now being made that affect the lives of the 60,000 people who live alongside the creek, and community members need to step up and be part of the process.

To end on a good note, it now appears that the fines levied against the Beach Haven complex for dumping 200,000 gallons a day of raw sewage into the creek will go to fund creek-related mitigation. This remediation precedent is an important step that hopefully will guide the creek to a cleaner future!