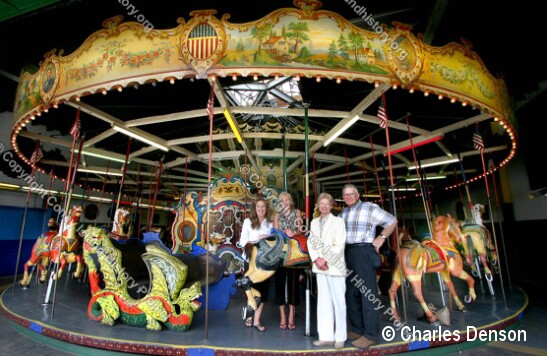 Jimmy McCullough, former owner of the B&B Carousell, poses with his wife and daughters in front of the historic ride before its sale to the City in 2005. Photo ©  Charles Denson.

Last week, Senator Kirsten Gillibrand announced the good news that Coney Island's B&B Carousell was officially added to the National Register of Historic Places. In January, Gillibrand wrote to the National Park Service explaining that although the current location at Steeplechase Plaza is new, the site was formerly Steeplechase Park and is historically symbolic and appropriate.

History owes a debt of gratitude to Bishoff and Brienstein, the carousel's namesakes, who brought the ride back from New Jersey in 1932, and Jimmy McCullough who bought it from his cousin Willy Bishoff in 1973, and his partner Mike Saltzstein, who kept the carousel spinning year-round on Surf Avenue until his death in 2001.

In this 2009 interview for the Coney Island History Project's Oral History Archive, Charles Denson talks with Jimmy McCullough, who passed away in 2013. Jimmy McCullough learned the carousel business from his father, James McCullough, who began his career working on the Steeplechase and Stubbman carousels. Working in Coney Island was a family business going back generations for Jimmy who was a descendent of both the Tilyou and the Stubbman families.

Jimmy and his family owned and operated numerous small amusement parks and carousels in Coney Island, including the historic carousels that are now in Prospect Park and Flushing Meadows Park, as well as Coney's B&B. Built in 1919 at the Coney Island factory of William Mangels, the B&B Carousell was the last remaining ride on the north side of Surf Avenue and the last of Coney Island's historic carousels when it was acquired by New York City in 2005. The resplendently restored carousel was installed in a new pavilion next to the Parachute Jump in Steeplechase Plaza in 2013.

Recorded in Cantonese with Chinese and English transcripts! Thanks to Council Member @MarkTreyger718, @NYCCouncil a… https://t.co/PDkE9trPM5
1 day 6 hours ago