The Coney Island History Project's first special exhibit of the 2016 season, opening on Memorial Day Weekend, will be "The 50th Anniversary of Fred Trump's Demolition of the Steeplechase Pavilion." A half century ago Coney's most beautiful and imposing structure was demolished by developer Fred Trump, Donald Trump's father. This exhibit examines in photos, ephemera, and oral history, the importance of the pavilion and the memories of local personalities who dealt with Trump before and after the tragic demolition of a Coney Island landmark. During the last decade History Project director Charles Denson interviewed many of the players involved in the loss of Steeplechase and the exhibit reveals many little known facts.

Fred Trump had a long lasting effect on Coney Island that goes way beyond the loss of the Pavilion. His racist tenant relocation tactics at the Trump Village development site destroyed the lives of many poor families who were moved to the dilapidated bungalows of Coney's West End community. None of Trump's Coney Island projects were without scandal or controversy. This exhibit covers them all.

Located on West 12th Street at the entrance to Deno's Wonder Wheel Park, the Coney Island History Project is just a few steps off the Boardwalk. View historic artifacts, photographs, maps, ephemera and films of Coney Island's colorful past.

Among the treasures on display is Coney Island's oldest surviving artifact, the 1823 Toll House sign which dates back to the days when the toll for a horse and rider to "the Island" was 5 cents! Today, the 193-year-old sign is often described as Coney Island's "first admission ticket."

Visitors to the Coney Island History Project are also invited to take free souvenir photos with an original Steeplechase horse from the legendary ride that gave Steeplechase Park its name and "Skully," a giant skull from Coney's Spookhouse and Spook-A-Rama.

The History Project's exhibition center season is from Memorial Day Weekend through Labor Day on Saturdays, Sundays and holidays. New hours are 1:00 PM till 7:00 PM. Admission is free of charge. 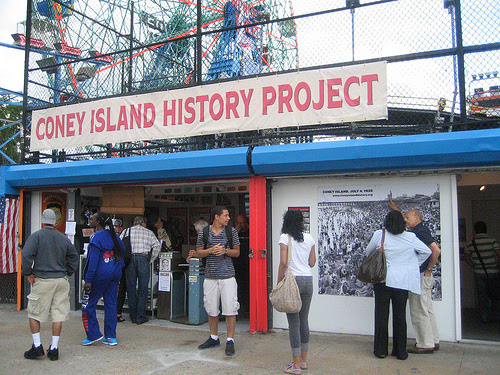